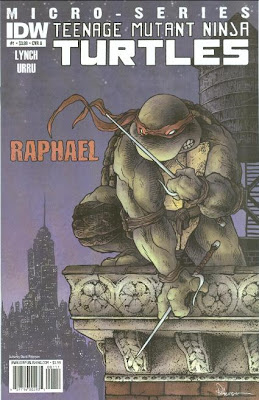 Another night in New York City and Raph has passed up an opportunity to go on patrol with his (recently reunited) brothers to spend the evening busting heads with Casey. Casey wants to know what it’s like to finally have the family he never knew he had, but Raph is reluctant to talk about it. Suddenly, the pair spot a figure being chased by two punks (one with a purple Mohawk, the other in army camos). They take down the punks and rescue their prey: a female mutant arctic fox named Alopex. 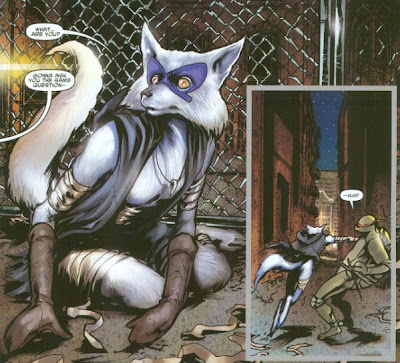 Alopex doesn’t remember much; just that she was taken from the wild and to a lab by several humans, who experimented on her. She escaped, but the lab dispatched several groups to reclaim her; the punks only being the latest batch. Raph isn’t interested in swapping origin stories, but is willing to take her back to the lair to meet his brothers and Splinter, who might be able to help her cope with her predicament… just so long as she goes blindfolded. Leaving Casey behind to call the police and pick up the punks, Raph takes off with Alopex.

Racing across the rooftops, Raph considers Alopex’s story and how it doesn’t quite hang together; namely, the moves she was displaying while fighting off the punks were too professional-looking for a recently mutated and “innocent” fox-girl. Raph summarily hurls her off a rooftop. 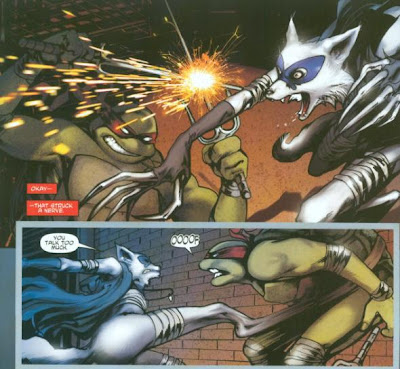 Alopex extends her claws and digs into the side of the building, breaking her fall, as Raph leaps down after her. The jig being up, Alopex reveals her “true” personality as a much colder, more calculating mercenary. She had planned on tricking Raph into revealing the location of the Turtles’ lair, but with that not panning out, she exits the fight with a smoke bomb.

After a while, Raph makes sure he’s no longer being followed and reconvenes with his brothers. Don checks his wounds while Mike lightens the mood with some jokes. Leo, however, immediately calculates a strategy; they will go on patrol in pairs from now on and randomize their rounds so as to make predicting their movements impossible. Raph later disobeys Leo’s orders and meets up with Casey. Apparently, even though he called the cops, the punks were hauled away by phony police officers to parts unknown. Raph tells Casey the new strategy and Casey, understanding, is ready to bid Raph farewell forever. Raph tells him to lighten up, as he’s part of their family now and he’s as deep in the drama as they are. 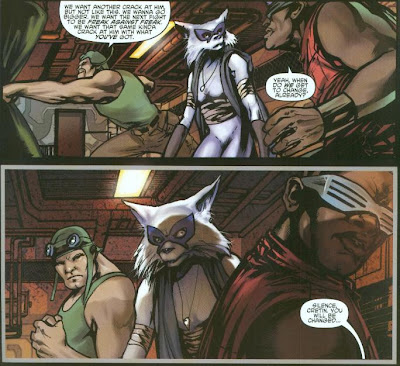 Elsewhere, Alopex is blowing off steam against a punching bag while being berated by her two partners in crime: the punks. Not thrilled with playing the parts of dumb goons, they both feel they’d be able to take the Turtles down on their own if only they had enhanced mutant abilities like her. A commanding ninja enters the room and orders them all to be silent. He tells them that they will be changed when the master orders it. Brandishing his sword, he casts a familiar, spiky shadow across the wall…

*This story is continued from TMNT (IDW) #5. The story continues in TMNT Micro-Series: Michelangelo #1.

*Though it takes place after TMNT #5, it was published a month before that issue. A note from editor Bobby Curnow on the inside cover assures readers that it can be enjoyed independently of the ongoing narrative of the main series.

*Raph was reunited with his brothers in TMNT (IDW) #4.

*According to editor Bobby Curnow, the Foot Soldier seen at the end of the issue was not intended to be the Shredder, though his identity can be interpretted differently by readers without affecting the storyline.

*The two thugs working for the Foot will appear again briefly in TMNT Villains Micro-Series #4: Alopex.

I’ve got a lot of words to eat, so I’d better go get some ketchup.

While the pacing of the ongoing TMNT series isn’t exactly to my taste, I have been rather hard on Tom Waltz and the title for dragging its feet. However, I can see now that IDW has had this approach calculated in advance, with these narrative Microseries one-shots (and the upcoming two-part Infestation miniseries) intended to offer brisker, faster paced stories to break-up the slow burn of the ongoing. With the Microseries supplementing it, I think it’s easier to appreciate the ongoing series as it is no longer the sole source of TMNT fiction from IDW and these additional monthly titles will help move aspects of the plot forward at a swifter pace.

Brian Lynch pens a thoroughly satisfying tale reminiscent in ways of the original Raphael (microseries) #1; at least in so far as the spotlight follows Casey and Raph as they patrol the streets of New York and engage in running battles (I found the unaltered recycling of the classic cover as a variant to be pretty hilarious). What impressed me most about the story was that it played with my own expectations and naïveté; I just presumed that this female fox-mutant was going to immediately hook up with Raph because of my experiences reading TMNT Adventures. I scoffed at a lot of Alopex’s dialogue for sounding like clunky fangirl fanfiction; “You’re not here… to hurt me?” and “You’re the first living thing I’ve met that wasn’t trying to eat or hurt me.” Yuck.

Of course, the dialogue was insipid and gag-inducing for a reason; as it was intentionally insincere. I probably should have seen Alopex’s betrayal coming, but again, I let my comfort with previous TMNT stories get the better of me; so what I thought was starting out to be a really dumb, wretched story turned out to be something very exciting.

In regards to Bebop and Rocksteady: I say unto thee, “Fuck YEAH.”

When they first appeared in the issue, I took them to be just “Easter Egg” cameos; Franco Urru using their human forms for a throwaway joke and nothing else. By the end of the story, we find out that they're genuine characters with a big future in store and duuuuude I am PSYCHED. I’ve stated before that I believe there are no bad characters, only bad writers. Bebop and Rocksteady may have had the misfortune of being annoying comedy relief villains from a children’s cartoon show, but that doesn’t mean they don’t have the potential to be re-imagined as genuine threats while still retaining their humorous and dim-witted qualities (so they still FEEL like Bebop and Rocksteady). Lynch seems to have that down in this issue, as the characters display very violent attitudes whilst otherwise being called idiots and cretins by their cohorts, illustrating they aren’t considered the smartest guys on the planet.

Then, of course, you’ve got the scar-faced ninja from TMNT #2 making his comeback. It had been presumed for a while that he would turn out to be the Shredder, as the scene where rat-Splinter scars his face was reminiscent of a similar scene from “TMNT: The Movie”, but it seems he isn’t quite there yet (he refers to a “master”, so he may be reporting to a higher authority for now). I’m looking forward to seeing how he’s built up, and also looking forward to seeing how a competent and non-comedic Shredder/Oroku Saki deals with the likes of Bebop and Rocksteady.

(EDIT FROM THE FUTURE: The scar-faced Foot Soldier from TMNT #2 and the Foot Soldier at the end of this issue were confirmed by editor Bobby Curnow as NOT being the Shredder.  HA!  Point at me and laugh!)

As for the idea of Alopex and there being lots of other mutants running around; I’ve never had any issues with it. Again, I’ve enjoyed Archie’s TMNT Adventures series and there were always plenty of mutant animals in that book. I didn’t feel they made the Turtles seem any less “special”. I mean, Superman doesn’t feel less “special” just because there are a bunch of other superheroes populating the DC universe, now does he? He’s still Superman. And the Turtles are still the Turtles no matter what other mutant critters show up. If anything, it makes a logical sort of sense that some villain with access to mutagen would actively create scores of powerful anthropomorphic underlings rather than stopping at one or two. And since some of my favorite characters are mutant animals, I say bring em on.

Franco Urru’s art and Fabio Mantovani’s colors are gorgeous and I really, really love the visual style of this issue. Raph isn’t as expressive as Dan Duncan’s take on the designs, but there’s a superb sense of action and staging going on here. Mantovani’s colors really make the whole package, though; his is a New York City that actually glows at night and he does such an awesome job rendering the effect of bluish street lights reflecting off Raph’s skin and shell.

To repeat myself, I think the pace of the ongoing is easier to take now that there’s another series to help move things along. The idea that we’ll be getting supplementing “in-between” chapters to help tide us over suits me and the hint at all the classic characters that are lined up for comebacks has me giddy. This was some good stuff.

Grade: A (as in, “And Bebop’s human design has gone entirely unchanged in 25 years, save that now he’s wearing Kanye glasses”.)