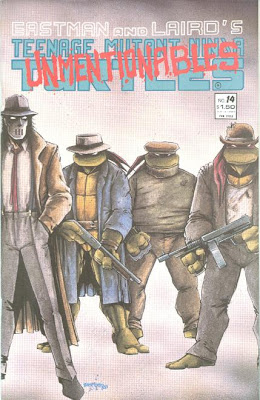 On the snowy streets of Northampton, Casey has taken to playing “old fashioned gumshoe” and is prowling the empty streets looking for a “case”. While reminiscing about playing in the streets with his cousin Sid during his youth, Casey makes a shocking discovery: the giant brass cow decorating the top of Louie’s Variety has been stolen! Casey spends all of the next day and night searching for clues and returns to the farm the following morning, nearly frozen to death. April leaves Casey in the care of the Turtles, as she needs to get to her job at the diner before she’s fired. 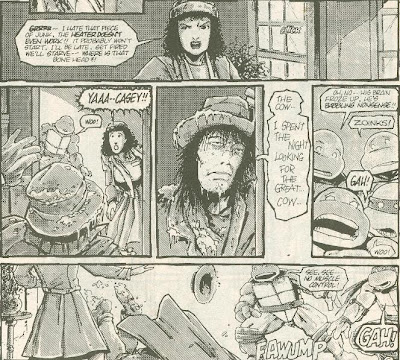 While at the diner, April hears two shady-looking patrons discussing a “cow” in a hushed tone, followed by mentions of a “boss” and room 213 at the Hotel Northampton. April calls Casey up to give him the scoop (unaware that her suspects overhear her phone call). Casey rushes to the hotel and is summarily thrown out. April meets up with Casey there and decides to do some snooping of her own for the sheer fun of it. In the lobby, she spots one of the suspects (a man named Howard) taking orders from a Texan named Cudworth. There’s to be a party at the hotel that night celebrating Cudworth’s daughter’s graduation; just the in April and Casey needed.

That night, April and Casey arrive at the hotel in their finest outfits, with the reluctant Turtles in tow. While they mingle in the party, the Turtles are to break into room 213 and search for clues. The Turtles break in and find a box full of photos, all of Cudworth, Howard, the cow and the store. The weird thing is, they’re actually in room 215! Down at the part, April gets separated from Casey and finds herself being pursued into an empty hallway by Howard (recognizing her from the diner). She bumps into the three Smengie Bros (Mikal, Luka and… Luka), who are acting as goons for Cudworth and Howard. Cudworth pays the Smengies the $10 million in exchange for the stolen cow, while Howard tells them to keep April detained but not to harm her under any circumstance. The Turtles spot the Smengies making off in their van with April and give chase in Casey’s old pickup truck.

In the men’s room, Casey is hiding out in a stall, waiting to overhear a lead. Two locals come walking in, discussing a hot tip about the local fair, namely the sure winner of the best cow competition. Misinterpreting the discussion, Casey hails a cab to take him to the farm on Route 116.

At the Smengie Bros auto garage, the goons have April tied up alongside the purloined brass bovine (draped in a tarp). The Turtles break in and subdue the Smengies. They quickly elicit a confession: the brass cow is actually made from gold. When escaping the war-torn nation of Slavakia, their brother Louie stole the golden cow and disguised it as a fixture on the roof of his shop. Cudworth hired them to steal the cow, though they had planned to double-cross him and take it back to Slavakia with their $10 million payday. Knowing they need more evidence to pin the theft on Cudworth, Leo concocts a plan. Calling Cudworth at the hotel, Leo (pretending to be a Smengie) demands an additional $5 million for the cow, knowing it will lure Cudworth to the garage where they can tape record some incriminating dialogue.

Meanwhile, at the farm on Route 116, Casey realizes he’s on the trail of an actual cow and orders the (irritated) cabby to take him back to the hotel. 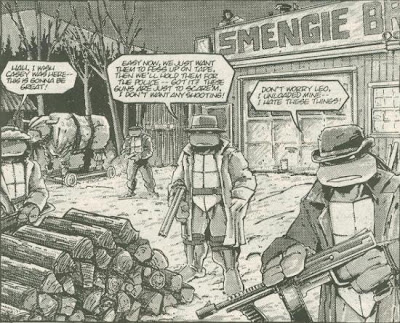 Back at the garage, the Turtles are disguised as the Smengies, holding unloaded guns and awaiting Cudworth. Cudworth, Howard and some additional goons show up, none too pleased. Cudworth demands a look at the golden cow, but when the Turtles remove the tarp, they find it to be a cow-shaped decoy made of rocks. The Smengies, having freed themselves, then burst through the garage door with the real cow loaded into the back of their truck. Cudworth and the Turtles each give chase in their vehicles.

As it so happens, the Smengies pass Casey’s cab. Ordering the cabby to drive up close to the truck, Casey leaps onto the roof and scares the Smengies into crashing. Cudworth arrives at the crash-site, ready to claim his golden prize, when Howard reveals himself to be an FBI agent. He’d been undercover, following Cudworth for some time. Howard calls in his reinforcements and Cudworth surrenders. Seeing the hullabaloo, April ditches the Turtles on the side of the road, then proceeds into the chaos to collect Casey. Howard demands an explanation from both her and Casey. 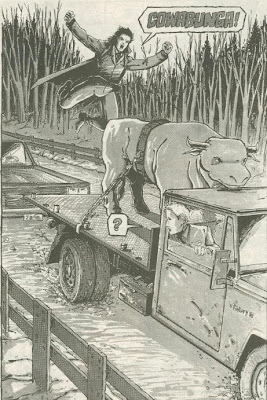 After a loooooong story, Howard decides to let them off the hook for nearly ruining a two year-long FBI investigation and agrees to file the case under “unmentionables”… provided they never, EVER play detective again. Overhearing the discussion, the Turtles laugh at their status as “unmentionables”.

*The "Exile to Northampton" era spans a full 2 years in story-time (Christmas '86 to Christmas '88).  With this issue having a Winter setting and taking place smackdab in the middle of the era, it likely takes place around Christmas '87.

*Casey was shown fantasizing about being an old school detective in the story, “Casey Jones, Private Eye”.

*Casey mentions playing with Cousin Sid on Centre St. as a kid. Cousin Sid appeared (as an adult) in Tales of the TMNT (Vol. 1) #1.

*CHET ALERT: Casey tells the clerk at Hotel Northampton he works for “Chet’s Note Delivery Service”. The name Chet was an Easter egg slipped into several issues by the Mirage staff because… they just liked that name!

*This issue was (very) loosely adapted by the 4Kids animated series into the episode “The Golden Puck”.

*This issue also featured a 2-page preview for “Melting Pot” and a 1-page comic, “Buy TMNT 16 or we Die” by Mark Martin.

You see, now stories like this are what make Casey so endearing.

Casey isn’t the sharpest knife in the drawer and he screws up a lot, but he always makes good in the end and when push comes to shove, he’s competent-enough, skilled-enough and gutsy-enough to save the day. Much of the 4Kids series, when it came to Casey, seemed like it was using “The Unmentionables” as a blueprint for how to treat him, but focusing on his dimwitted blundering to the point of missing all those stronger points I just listed. “The Unmentionables” is not only an awesome Casey-centric story, but also one of the extremely rare times in the Mirage comics where April proves to be a really fun, enjoyable character.

So far as Casey’s portrayal goes, by this point in the series we hadn’t gotten to see much of him beyond his anger management issues; just the violent jock that loves pounding heads. “The Unmentionables” rounds him out with a much more humorous angle, which some might interpret as “watering down”, but I found it succeeded in making him more multi-dimensional and likable. We get a peek at some of Casey’s history (referencing Cousin Sid from Tales of the TMNT) as well as a glimpse at his own personal fantasies and how, in his goofiness, he literally tries to act out on them (regardless of his qualifications). I think the short story “Casey Jones, Private Eye” should be taken as a mandatory prologue to this issue, as it helps establish the seemingly random “cheesy gumshoe” persona Casey takes on in the opening pages and the two stories flow into one another really well.

As for April, I dig how she was portrayed in this story. Too often, she has to be the dull “den mother” character in the Mirage comics and can never do or say anything interesting. Eastman turns that idea on its head with this issue. She starts out that way, flipping out because she’s going to be late for work and that she has to put food on the table for everyone because all the men in the house are jobless bums, etc. But as the story moves along, she really starts to get caught up in Casey’s whole detective fantasy and begins actively helping him search for clues and chase after the badguys, sincerely loving it every step of the way. This is a great issue for developing April and Casey’s romance and illustrates that she has an attraction to him beyond just the boring old “he’s a bad boy *swoon*” shtick. Casey may be an unpredictable screw-up with weird delusions about himself and his limitations… but damn if he isn’t a whole lot of fun to be around.

The Turtles pretty much take a backseat to the entire story, and I’m perfectly okay with that. Casey and April are as much a primary part of the cast as the TMNT are and they deserve their fair share of leading roles. Be that as it may, the Turtles play some amusing parts in this issue. Whereas April begins to get caught up in Casey’s adventure, the Turtles play the voice of reason throughout the tale; first brushing off Casey’s suspicions, then being reluctant to break into a hotel room, then wondering how they got caught up in the whole drama when things start to go south. In a bizarre turn of events, it’s the plain ole humans who turn out to be the craziest characters in the story, while the karate-chopping anthropomorphic reptiles take on the boring roles.

Above all else, “The Unmentionables” is just really, really fun. It’s definitely meant to be a comedy and a lot of the jokes are genuinely funny. I love Casey’s opening monologue, as he tries to wax on in a film noir-style of outdated detective lingo but can’t quite get it right. Eastman is firing on all cylinders with the art and man does he nail the expressions. The look on frozen Casey’s face (pictured above) is pure gold. And I absolutely love this:

If there’s anything that detracts from “The Unmentionables” I guess it would have to be all the spelling and grammatical errors. Holy cow, there are a LOT of them.

Be that as it may, “The Unmentionables” is my favorite issue in the “Exile to Northampton” era of the series (well, not counting the Tales issues that retroactively fit in there). It’s fast, furious and a whole lot of fun.

Grade: A (as in, “Although holy SHIT did 4Kids butcher the Hell out of this story”.)