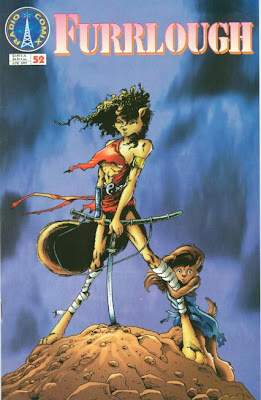 Sneaking into Seirankai Laboratories in the dead of night, Ninjara finds entrance through a ventilator shaft. She locates the gilgamesai seed hovering in a stasis field, but before she can snatch it, several armed guards show up. She kills one with a pair of shuriken, while the second opens fire. A third leaps at her from behind, but she judo-flips him into the second guard’s line of fire, killing him. 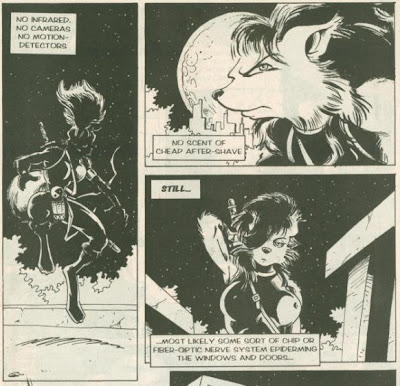 Ninjara and the second guard are at a standoff. Ninjara offers him the opportunity to leave with his life, as it is only a seed he is protecting. The guard refuses, fearing the repercussions of his employer, and opens fire. Ninjara dodges the bullets and slices off the guard’s leg. 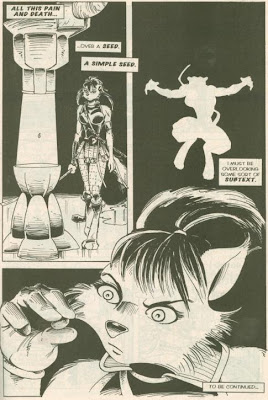 She then approaches the stasis field with the seed in it, wondering what could possibly be so important about the thing. As she plucks it out of the field, the silhouette of a female cat-mutant appears behind her, ready to pounce...

*This story is continued from Furrlough #48.

*Page 4 was mistakenly printed as Page 2 in this issue.

*Due to various other professional obligations, Murphy and Allan were never able to complete the serial and it remains unresolved.

And Ninjara’s furry serial comes to a cliffhanger conclusion. I hope you weren’t too interested in the thing, as you’ll likely never see it completed. Viacom owns Ninjara lock, stock and barrel, now (Murphy and Allan have revealed that they no longer own the character rights) and I doubt a family-friendly multinational corporation would fund continuing a blood and nudity-filled serial originally published in a furry stroke mag. And you’ll probably never see these three chapters reprinted anywhere, either. Lacking a conclusion means they’ll never be collected on their own, and the adult material means they could never be included in a TMNT Adventures collection as a curiosity.

No, these things are pretty much doomed to be forgotten outside scans that get passed around online.

It’s sort of a shame, too, as I rather liked the story and the setting and especially Allan’s art… I just thought the “adult” tones were really gratuitous and unnecessary, adding absolutely nothing to the comic.

This third and final chapter is probably my favorite of the bunch, as it excludes the nudity and juvenile cursing, sticking to the action. Ninjara is a bit too ruthless for my tastes, killing the first two guards without hesitation (the first guard offered her a chance to surrender and she “fired” first, while the third guard tried to subdue her without killing her). She offers the second guard a chance to leave with his life, and through his dialogue we learn that he works for some unsavory characters, so I guess we’re supposed to forgive her as she was only killing “bad guys”.

No idea who the cat-woman at the end was going to turn out to be. I’m assuming it’s a cat-woman, as that’s what the silhouette looks like, but who can be sure?

Anyway, I think the Ninjara serial had a good story at its core that got ruined due to the medium it was being published in. The preoccupation with being “adult” undermined its positive qualities and put it in such a narrow niche that there’s no way we could ever see the chapters reprinted. All in all, I appreciate the gesture, but the end result was just a bad idea.