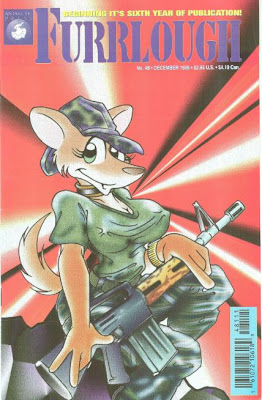 At the mansion of Tetsu Kono, Ninjara is having trouble with the ninja doorman. She says she’s been summoned to do a job, but the doorman won’t let her in. They trade insults and prepare to trade blows, when Tetsu orders Ichiro (the doorman) to stand down. Ninjara enters the mansion to find the elderly man trimming a bonsai. He sicks three of his ninja on her as a test of skill while he dictates his mission. He wants her to steal the last remaining seed of the gilgamesai orchid; as a collector, it is priceless. Ninjara handily defeats the ninja and accepts half her usual fee upfront. She then leaves to steal the seed from Seirankai Laboratories. After she exits, Tetsu orders Ichiro to follow her, find her weakness and then bring her back to him.

Outside a Buddhist temple, Ninjara leaves her daughter, Moko, with one of the priests. The priests of the temple are friends of Ninjara’s and happily take charge of her child. Ninjara bids Moko farewell, though the little girl wants to go with her, citing that she wants to be just like her mother. Such a notion doesn’t sit well with Ninjara. 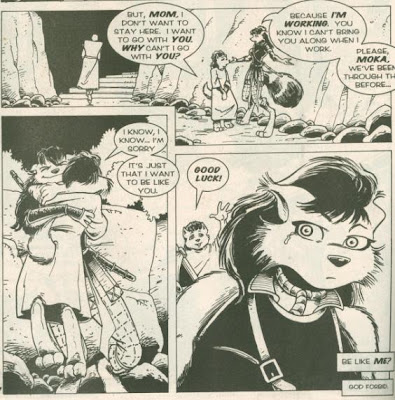 By a torii, Ninjara meditates. She considers how she used to be known as the greatest thief in all of Japan, but is now nothing more than a hired burglar. Still, she concedes that she needs the money in order to track down those who killed her husband, Mokoshan, and get her revenge.

*This story is continued from Furrlough #47. The story “concludes” in Furrlough #52.

The second installment in Ninjara’s furry serial has precisely the same ups and downs as the first. I have nothing negative to say about the story or the characters or the setting. I’m actually interested to see future-Ninjara walking around in the world a few decades prior to “The Future Shark Trilogy” with her daughter, tracking down her husband’s killer. All that stuff is pretty cool.

No, what I take issue with is just how sloppily Murphy (Clarrain) is forcing the “maturity” into each strip. And of course, I’m defining “maturity” at its absolute most juvenile: gore, nudity and cursing. We haven’t gotten to the gore yet, but you can strike the other two off the list.

The trading of verbal barbs between Ichiro and Ninjara is just embarrassing to read. For non-Japanese speakers (I’m assuming that’s most of you), you probably wouldn’t care, but for me, it was like watching a pair of 7th graders trying to one-up each other. It was stupid, not just for the immature crap the insults translate to, but because it reads like some fanfic author with an online Japanese-English translator trying to dig up whatever “hilarious” bits of name-calling they can find for their Ranma ½ epic. Even if you don’t know Japanese, it reads very amateurishly.

Chris Allan’s pencils are as good as ever and though there isn’t much action in this installment, there’s still a lot of life and energy to the characters. He’s definitely drawing Ninjara more… buxom, than in TMNT Adventures, but at least she keeps her shirt on for this chapter. Furrlough is a furry stroke mag, after all, so he has to fulfill the mandatory allotment of “animal-based sexiness” somehow.