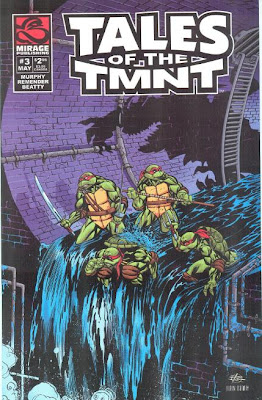 “The Worms of Madness, Part One”

Frontispiece: Decked out in vampire-hunting gear, Raphael considers how much he hates magic, monsters and otherworldly phenomenon. Why does he hate them so much? Because they're all real…

Somewhere in time and space, a four-armed monkey is meditating and laughing to himself. But, in the here and now… 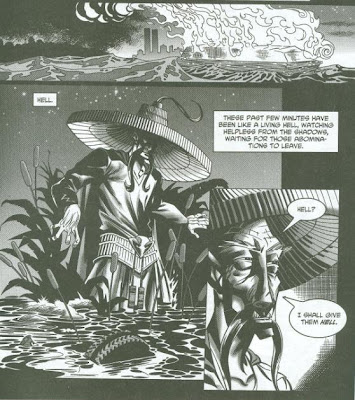 The Turtles have done it. After a grueling battle, they have decapitated their arch-nemesis, Oroku Saki: The Shredder. Loading his corpse onto a small raft and shoving it out into New York Harbor, they set his body ablaze, with Leonardo personally wishing that he burn in Hell. As they leave, though, a Foot Mystic sneaks from his hiding place, having observed the whole ceremony. Having been one of the Foot Mystics who used his skill to revive Oroku Saki the first time via the worms, he vows to do so again out of sheer hatred for the Turtles. Casting a spell, he binds his spirit to the rapidly burning body of Oroku Saki. Later, a gull begins pecking at the charred corpse, knocking Saki’s severed head into the water, where it is promptly eaten by a shark, worms and all. 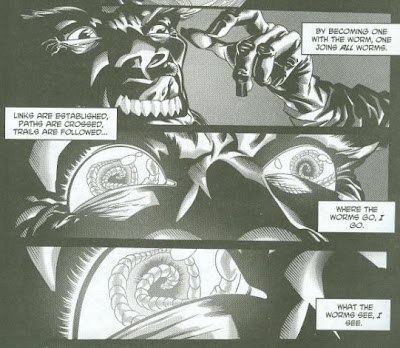 Down in the sewer lair, Leo is cleaning his katana in a post-battle ritual. He finds one of the worms still clinging to his blade and flicks it into the sink. Little does he know, the Foot Mystic, having now bonded with the worms that resurrected Saki, can see through the critters. He now knows where to find his foes.

A little over a week later, Splinter takes the Turtles to a nearby sewer tunnel for a lesson. Mike chides Leo for not lightening up after his big, epic duel, and Splinter actually sides with him. Leo thinks Mikey’s being too much of a spaz, as usual, so of course he doesn’t believe him when he says there’s a shark in the sewer water. 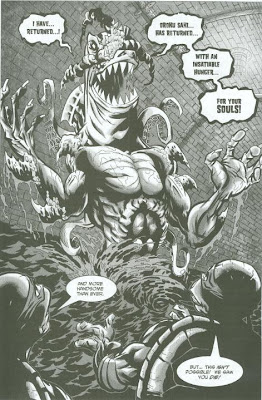 That shark bursts out of the muck, a gigantic creature with arms, tentacles and a shark’s head. The monster introduces itself as Oroku Saki, the Shredder, who has been reborn to take vengeance upon the Turtles for killing him a second time. Splinter doesn’t quite buy the monster’s claims, while his sons are more interested in putting Saki in the grave a third time. The Turtles attack, but the Shark Shredder nabs them all with his tentacles, draining them of their energy and dumping their unconscious bodies into the sewer. The Shark Shredder then sends a wave of worms toward Splinter. The wrigglers pick him up and draw him into the Shark Shredder’s body where he is to be absorbed.

*This story takes place immediately after TMNT (Vol. 1) #21, when the Turtles killed the Shredder. The story continues in Tales of the TMNT (Vol. 2) #4.

*Mashima the Foot Mystic can be seen in a flashback in TMNT (Vol. 3) #24, using the worms to resurrect Oroku Saki.

*This issue also came with a bonus story, “Green” by Peter Liehr and Peter Schaaff.

2004? Really? Jeez, it doesn’t feel like this issue came out nearly seven years ago. I hadn’t even turned 19 yet, when this thing came out! At this rate, I’ll be dead before I know it…

Anyway, I recall “Worms of Madness” feeling like a pretty big deal when Mirage announced it and it hit the racks.

Oroku Saki had only ever been in a whopping total of four issues of the Mirage series, so the very idea of him making a comeback in Tales of the TMNT, even as a hideous shark mutant, was enough to excite a lot of fans. And “The Worms of Madness” had some lofty expectations to live up to, too. Not only was it bringing back the Shredder, who hadn’t been in a Mirage comic since 1989, but it was a sequel to “Return to New York”, one of the most acclaimed storylines in the whole series. Yessir, it pretty much HAD to be good if Mirage was willing to let it see print.

Of course, we’ll find out next issue that it wasn’t quite the “real” Oroku Saki coming back as the Shark Shredder, but that was perfectly fine. A monster that thinks its Oroku Saki has come back from the grave and that’s all that really matters. Remender’s design for the beast is excellent, especially with the bone formation at the top of the shark-head looking like the crest of the Shredder’s helmet. Perhaps a bit silly, but let’s get real, here. The Shredder was just brought back from the dead as a gargantuan sharktopus. We all gotta lighten up for this one.

As a sequel to “Return to New York”, I really dig it. “Return to New York” was this humongous epic built upon years of storytelling that saw the Turtles running a gauntlet of dangers before having their final showdown with the Shredder. A fantastic story. Rather than try to emulate that approach, Murphy and Remender dial it down a notch. What “Worms of Madness” amounts to is something like “The Scouring of the Shire” from “The Return of the King” (the novel, not the movie); the epic quest is over, but there’s still one final, life-threatening loose end to take care of before everyone can chill and write their memoirs.

I also appreciate how it deviates from “Return to New York” in tone, too. In that storyline, the Turtles were pretty grim, even speaking some stoic, hammy, out of character dialogue. They were joyless characters in that one because it was, well, a very heavy, joyless story. Their attitude fit the nature of the arc. “Worms of Madness”, however, is ridiculous (but in a good way), and so the Turtles take the threat with a more lax and comical approach. And it’s one more reason why I like this as an epilogue of sorts to “Return to New York”, as the less serious tone acts as something of a “winding down” from the very gritty, uber-serious epic.

What really makes “Worms of Madness” a standout story arc is the whole production of it. They could have easily turned art duties over to Jim Lawson (penciler of “Return to New York”), but his contemporary style never could have done the script justice. Instead, they assemble a three-man team for pencils, inks and tones (unusual for Tales of the TMNT) and the result is a lavish, beautiful book. Remender’s layouts are pure dynamite; there’s so much energy in everything he pencils. There’s a great cinematic sheen to the staging, as panels follow circling drains or drift into close-ups one box at a time, but the whole thing never feels too decompressed. Beatty’s inks and Cohn’s tones, though, really make the whole thing pop. It’s a lighter story than “Return to New York”, for certain, but they add a great sense of menace and shadow to accent the “monster movie” theme.

“Worms of Madness” can be pretty goofy, no question about that, but the execution is all that matters. This is a superb production; one of the highlights of the second volume of Tales of the TMNT and one of the title’s best-selling couple of issues, too (the official website ran out of back issues of this story before any other). It’s really worth picking up as a complement to “Return to New York”.

Grade: A (as in, “And keeping the timeline of the series intact, Mikey treats ‘The Simpsons’ like they’re still funny”.)
Posted by TMNT Entity at 4:56 PM