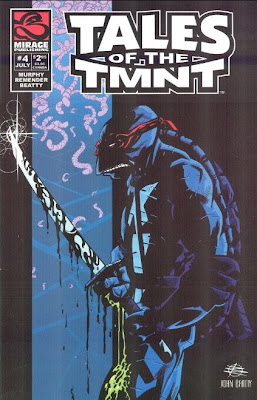 “The Worms of Madness, Part Two”

Frontispiece: Swimming for his life from a hungry shark, Michelangelo considers how he used to think the things were cool. Unfortunately, his opinion of sharks changed dramatically after his encounter with a certain shark-like monstrosity…

Recovering from their beat-down at the hands of the Shark Shredder, the Turtles find they have had their personalities mystically reversed. Mike is now the serious leader, Leo is now a goof-off, Raph is now a coward and Don is now an imbecile. Taking charge, Mike leads his brothers back to the lair until he can figure out a solution. As his brothers waste time, Mike hits the books in Splinter’s library, going over all his mystic tomes. Finding one to open a door to another dimension, Mike gathers the other Turtles and recites the incantation. 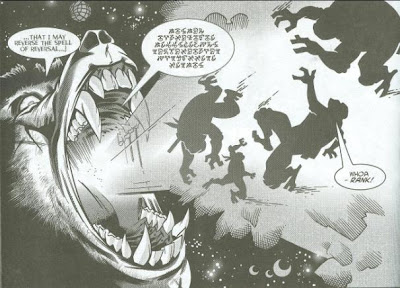 The Turtles find themselves in a “psychic prison” where a four-armed monkey meditates. The monkey is Pai-Doth Noor, a powerful mystic. He recognizes Leonardo, though since linear time does not exist in his astral jail, he cannot articulate whether they have already met or will meet in the future. Mike asks for Pai-Doth Noor’s help in restoring their personalities and finding Splinter. Noor agrees to reverse the spell of reversal placed upon them and return them to the physical plane at the location of their father, but so long as they agree to fulfill an unnamed bargain for him. The Turtles agree and Noor does the deed. 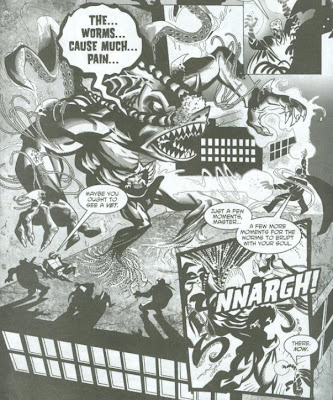 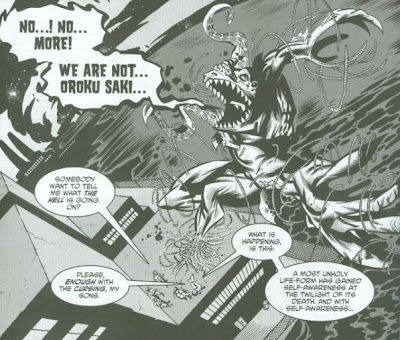 Splinter explains to the Turtles that in his final moments, the monster gained self awareness, which proved too much for it. The Turtles consider its fate somewhat tragic.

Down in the ocean depths, a strange creature considers how its hate for the Turtles has grown, yet that hate has left it hollow inside. The creature is revealed to be a hybrid of the Foot Mystic and the Shark Shredder. Realizing that it is a being of nothingness, it swims away, having only its hate to drive it.

*The previous/future encounter between Pai-Doth Noor and Leonardo will happen in Tales of the TMNT (Vol. 2) #13.

*The Mashima/Shark Shredder hybrid will return in Tales of the TMNT (Vol. 2) #33.

And “Worms of Madness” comes to a hasty conclusion. I actually felt that the reversal of personalities was a bit of a distraction from the plot, as it doesn’t go on long-enough for Murphy to get much out of it and the problem is resolved fairly quickly. Really, it seemed as though the only reason that subplot was included was so Murphy could introduce Pai-Doth Noor, setting up a future story arc in Tales of the TMNT.

Be that as it may, this is still a pretty solid conclusion to a very exciting storyline. Though mostly wasted potential, the reversal of personalities provided some levity at the beginning of the issue, as you see each Turtle behaving uncharacteristically. It could get a little too juvenile (the diarrhea joke was embarrassing to read), but it was fun to see Mikey saving the day.

For me, the story doesn’t really rev up until the Turtles get to the toxic waste dump and fight the Shark Shredder. From that point on, it’s pure action and Remender once again rocks the whole scene. The way the Shark Shredder is ultimately defeated felt somewhat predictable, but the Shark Shredder was never really meant to be a “major” threat, so to speak. He was a grotesque and powerful monstrosity, but he was never the “real” Oroku Saki. And in the end, that realization proved more of an undoing than Mashima’s blundering or the Turtles’ punches and kicks. Just one of the reasons why I really enjoy “Worms of Madness” as an epilogue to “Return to New York”, as it’s sort of akin to cleaning up the “leftovers” of that storyline and illustrates why the worms can never be used to bring the true Oroku Saki back to life ever again. Nope, he’s gone for good, this time.

Of course, the Shark Shredder would make one more appearance well down the line, but that story takes place a few years after this one and I’ll get to it in due time.

Though I enjoyed the first half of “Worms of Madness” a bit more than the second, I think they form a solid whole. It’s a great companion to “Return to New York” while otherwise being an entirely different type of story. Once again, I highly recommend it.

Grade: A- (as in, “Although, I challenge you to walk into a library looking for one sentence amongst all the books on the shelves. Mikey found it in five minutes, can you?”)
Posted by TMNT Entity at 8:41 PM