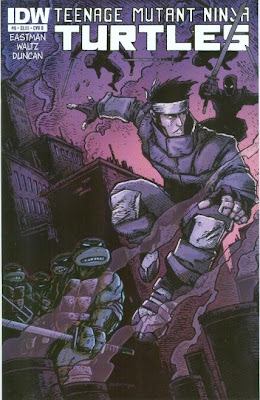 On the dark rooftops of New York, the Turtles secretly chase after a pair of ninja who seem to be pursuing something. As Leo suffers Don’s intellectual ego, they round a corner into an alley and find what the ninja are after: a man performing parkour and trying to escape them. They follow the Frenchman to the nearest roof, where he stops to make a stand against the ninja. Raph insists they help, but Leo orders him to stand down. The Frenchman puts up a fight, but is stabbed to death by the two ninja. Raph rushes onto the scene as the ninja vanish in a cloud of smoke. As he lay dying, the Frenchman’s final words are “War is coming”. 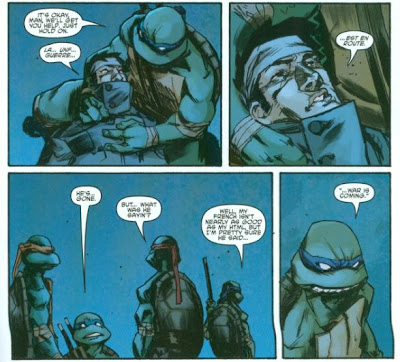 At Stockgen, Baxter Stockman is not pleased with Old Hob’s progress, warning him that he’s one strike away from being “out”. Hob defends his position, claiming that he’d need an army to take down the four Turtles. Stockman thinks he may be able to facilitate such a request.

At Casey’s house, Mr. Jones drunkenly laughs at his son’s plans on getting a part-time job. Casey brushes his words off, looking at the note he took from the campus bulletin board and deciding to go through with it. 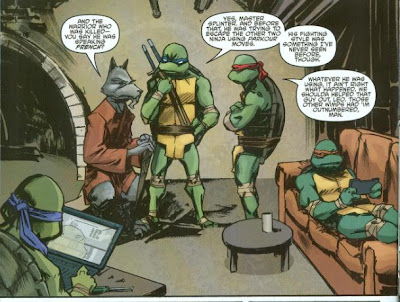 Down in the sewer lair, the Turtles relay what happened to Splinter. Splinter is certain that the ninja whom they saw were members of the Foot Clan; their ancient foes from a previous life. Don is less inclined to buy into reincarnation and destiny, as the concepts don’t gel with his more scientific and pragmatic personality. Splinter understands Don’s apprehension, but assures him of the facts. The last thing he remembered as a human was a sword at his neck. When he awoke, he was in a laboratory being prodded by needles. When he saw the four turtles in a glass case, he knew that they were his lost sons and his prayers had been answers. Splinter could also tell that the scientists in the lab were planning something sinister; a form of military domination. He felt there was hope when a good-hearted young woman entered into their lives, but then the Foot Ninja struck again and you know the rest of the story.

At the New York Tech campus dorms, Casey approaches the room on the bulletin advertisement. He’s introduced to April, who offers to give him tutoring in exchange for self defense lessons. 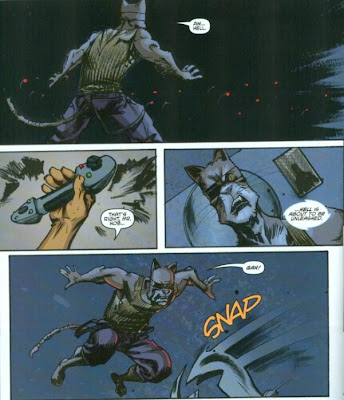 Back at Stockgen, Baxter takes Hob to a vault and ushers him inside. He then closes the door behind him, intent on introducing the mutant cat to his new ‘army’. Baxter then unleashes a horde of tiny, toothy robots designed for clearing minefields: Minefield Ordnance Unarming System Enhanced Robots. Or, “Mousers” for short.

*The Savate Ninja gang will return in TMNT Annual 2012.

*This issue was originally published with 3 variant covers: Cover A by Dan Duncan, Cover B by Kevin Eastman and Ronda Pattison, and Cover RI by Rob Guillory.

IDW’s TMNT series really does feel like one of Marvel's “Ultimate” reboots and plays to the same sense of pacing, cliffhangers and "startling" reveals. We’re getting all the classic characters and concepts reintroduced to us at a slower pace, which has been exciting, but it’s also all rather telegraphed. For instance the ninja were introduced as far back as issue #2 but an effort seemed to be made not to identify them as Foot Soldiers until issue #6… where they’re identified as Foot Soldiers rather unceremoniously. It wasn’t really important and every half-cognizant reader had already figured that out long ago, so my question is, why keep it under wraps in the first place?

Likewise, introducing Baxter Stockman means inevitably introducing the Mousers. I liked the new concept behind their original function (minesweepers instead of rat-catchers), but again, it’s not really much of a cliffhanger for your climactic splash page when readers knew it was going to be the Mousers all along. A lot of comics these days do this and I’m not sure who they’re trying to surprise. The last issue of IDW’s debut "Transformers" miniseries, “Infiltration”, ended with the shocking splash page of Optimus Prime stepping onto the scene. Was that supposed to be a surprise? What would have really been surprising is if it hadn’t been Optimus.

Likewise-likewise, guys such as Brian Michael Bendis and Geoff Johns do this sort of thing as a matter of routine. You’ll read an issue of Geoff Johns’s run on DC’s "The Flash" where the whole conflict of the story is the weather going crazy, and so the big shock-and-awe final splash page is, guess what, the Weather Wizard! And don’t even get me started on Bendis ending, what was it, Ultimate Spider-Man #5 with the final page reveal that, yes indeed, Spider-Man IS in this book titled “Ultimate Spider-Man!”

You can pick your jaw up off the floor, now.

I’m sounding a bit nasty, I’ll admit; it’s just that it’s become something of a cliche' used in excess these days and I’m kind of wistful for the era when the cliffhanger was used to surprise the audience, rather than show them what they’ve been predicting since they first opened the book up.

Anyhow, one of the nicer things about this issue that we hadn’t been getting in the preceding installments of the ongoing or the Microseries has been extended interactions between the four Turtles. They’ve very quickly fallen into their recognized relationships, though some new chinks in the armor have been added that I find fascinating. Leo and Don going at it is a brand new dynamic and one I really want to see explored in greater detail. Donatello is the smartest, so it’s only natural for him to have an ego and to challenge authority (“I’m the smartest, so why should I listen to you?”). It’s a nice break from the endless Raph as Wolverine, Leo as Cyclops thing we’ve gotten for decades.

I’m curious as to what the Savate Ninja (as he’s called in the notes section of this issue) was foreshadowing with his cryptic dialogue and precisely what faction he even belongs to. Are we going to be getting into a “City at War” scenario this early in the game? The idea of other ninja organizations out there besides the Foot intrigues me.

Artist Dan Duncan seems to be getting by without Kevin Eastman’s layouts just fine, too. I had a problem with the big “parkour” reveal on the top of page 4; the Savate Ninja doesn’t really look like he’s touching the wall or even hitting it at the same angle it’s extending. But other than that, this was a competently penciled story. The new Mousers seem a bit “over-designed”, but I’m mostly okay with them. I do like that there appears to be variety in their models.

Ronda Pattison, who has been doing a great job on colors so far, needs to adjust some of her palette choices for shading, I think. she appears to use a very bluish shade of purple/lavender for Don in a few panels (page 9 and page 14) to account for lighting/shadow. This has the effect of looking too blue and making him appear to be miscolored as Leo. Then there's a scene where Leo has a red bandana and Raph has a blue one... no excuse for that, really.

All in all, this is another set-up issue, and while I sounded like I was raining hate down on it at the beginning of my review, that was more a matter of getting something off my chest regarding an overused storytelling trope; I don't mean to sound like I'm picking on Waltz exclusively. This issue has what a lot of folks have been dying for since the series began: Foot Soldiers, the Turtles playing off one another, and lots of villains. There are fresh dynamics between established characters and some nice little references snuck in, such as Mike spouting his lesser-known catchphrase from the Fred Wolf cartoon, "Holy guacamole" (beats "mondo tubuloso", at least).

Definitely a good issue, despite the confused bandana coloring and a cliche' splash page at the end.

Grade: B- (as in, “But I won’t be satisfied until Stockman climbs inside a hovercraft that launches tiny Mousers at the Turtles and blinks red when you hit it enough times”.)
Posted by TMNT Entity at 8:34 PM