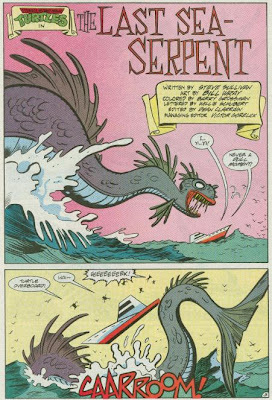 On Shelton Slujj’s yacht, the Turtles are living it up. Although April and Splinter couldn’t make it, they were happy to accept Slujj’s offer of gratitude for saving his daughter, Emelia’s life: a cruise straight to Hawaii! Suddenly, the yacht is sunk by a rampaging sea serpent and the Turtles scramble to save Slujj and Emelia. Piling into the inflatable life raft, their luck gets even worse as the seas grow violent and stormy. 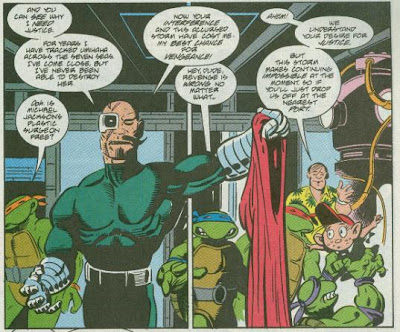 A Japanese vessel, the Shiumi's Justice, appears through the storm and the deck hand, Kai Nezumi, welcomes the Turtles aboard. Once onboard, however, they are berated by Captain Agamatta, who blames them for the loss of his prey: Umihaha, the sea mother. Agamatta explains that many years ago, he was captain of the Shiumi, a Japanese whaling vessel. One day, they were attacked by Umihaha and Agamatta’s nephew, Gisei, was killed. Agamatta returned to Japan and used his family fortune to replace his lost limbs with bionic prosthetics and construct a self-automated, technologically advanced ship: the Shiumi’s Justice. Agamatta then dedicated his life to gaining vengeance on Umihaha, with only his deck hand, Kai, to keep him company.

Agamatta locks the Turtles, Slujj and Emelia up in his quarters, promising to drop them off at the next port only after he kills Umihaha. After several fruitless hours of struggle, the Turtles cannot break out of their cell. They won’t have to, though, as Kai appears and releases them. Kai explains that he’s not saving them from the Captain, but wants them to save the Captain from himself. As it turns out, Agamatta’s entire quest for vengeance is his way of running away from the responsibility of Gisei’s death.

As the whole story goes, Agamatta insisted on letting Gisei join his whaling crew, even though the boy was too young to legally join. When Agamatta spotted a school of sea serpents, he and Gisei immediately tried to catch one to bring back to Japan and make themselves rich. They managed to harpoon and kill one of the serpents, angering their mother, Umihaha. Umihaha then destroyed the ship and you know the rest. 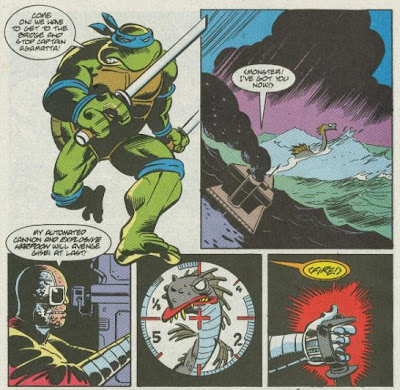 Upset that the Japanese still engage in whaling even though the rest of the civilized world has made it illegal, the Turtles agree to subdue Agamatta and bring him home, where he can get help. Agamatta doesn’t want help, though, and unleashes his ship’s mechanical defenses to detain them. The Turtles destroy the security controls, shutting down the robotic tentacles, then head for the bridge. Before they can make it, Umihaha appears and sinks the Shiumi’s Justice.

The Turtles are thrown from the ship and become separated from their human friends. Luckily, one of Umihaha’s offspring finds them and, being friendly, helps them stay afloat. They meet up with Umihaha and use their telepathic rapport with Splinter to speak with the sea serpent. Knowing that they are friendly, she takes them back to the remains of the Shiumi’s Justice and offers a tow to port. On the ship, Slujj, Emelia and Kai have weathered the danger intact, though Agamatta has been gravely injured and left unconscious. 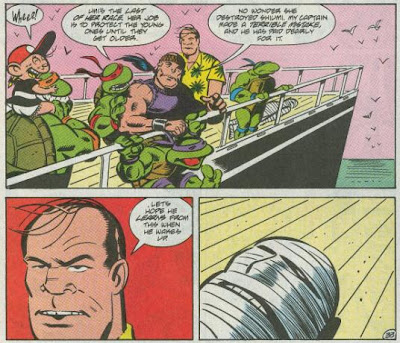 Arriving in Kilaoto, Hawaii, Kai helps his Captain into an ambulance, promising to try and cure him of his thirst for vengeance. With their vacation back on track, the Turtles ask where the nearest pizza parlor is.

*This story is continued from “If a Tree Falls…”. The story continues in "Wrath of the Fire God".

*Bill Wray draws Slujj and Emelia with entirely different character models than in their previous appearance.

*The Turtles used their telepathic bond with Splinter before, in TMNT Adventures #17.

*Slujj will return, in a flashback story, in TMNT Adventures #72.

Well, that was better than the first story in this Special. Still rife with environmental undertones, but at least this one had some basis in reality (the Japanese do consider themselves exempt from international whaling laws and continue killing endangered species to this day). Unlike “If a Tree Falls…”, however, the lesson was wrapped up much better in the story and we got a lot of action and adventure to move things along. The agenda was still transparent, but at least the story was fun.

“The Last Sea-Serpent” is just another “Moby Dick” parody and those are practically a dime a dozen. I think they could have developed Captain Agamatta further in the ongoing series as a decent villain, but TMNT Adventures was reluctant to acknowledge very many characters and stories exclusive to the seasonal Specials. At the very least, Murk Mariner could have been Captain Agamatta and no harm would have come to that later story. And he’s still a better villain than Captain Mossback.

Bill Wray’s art is this weird middle-ground between “silly” and “not too silly”. Emelia is absolutely ridiculous-looking and the Turtles are constantly making bizarre faces and poses, like their bodies are formed of gelatinous goop. At the same time, though, there’s a lot of heavy inking, creating a dark atmosphere and the action sequences are rendered in a much less jovial fashion. The style is sort of all over the place, but at least it gives the story its own personality.

Altogether, this is a pretty average story and it does little to balance out how awful the preceding adventure was. TMNT Adventures Special #1 was not a particularly good publication, being too preoccupied with soap-boxing some environmental agendas than making, well, a fun comic kids would enjoy.

Grade: C- (as in, “Could Slujj’s sudden lack of hair be related to radiation exposure from the previous story, or just uncommunicative artists?”)