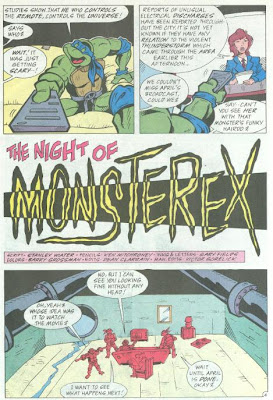 On a dark and stormy night, Count Dracula, the Gill-Man, the Wolf Man and the monster of Frankenstein approach a creepy castle. Inside, a mad doctor has finished creating his new bride, whom he intends to force to marry him. Suddenly, the quartet of monsters begin banging at his door.

And that’s when Leonardo decides to change the channel to watch April’s evening news report (much to the chagrin of his brothers). According to April, strange electrical storms have been plaguing New York with no one knowing what’s causing them and when they’ll cease. The report over, Leo changes back to the monster movie at the same time a weird lightning bolt comes zipping through the sewers. The bolt destroys the TV and out of the smoke appears a monitoring probe. It turns out that Krang is the cause of the electrical storms, having created a new mutating ray in the hopes of zapping the Turtles back to baby turtles. Unfortunately, he missed. 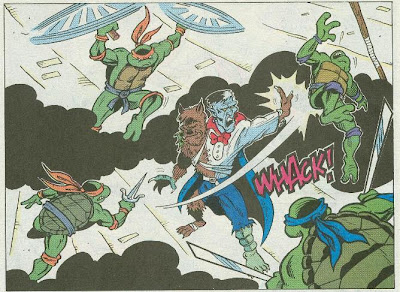 His ray did pull off one stunt, though: by zapping the monster movie, it created a fusion of all four creatures brought to life, calling itself Monsterex. The Turtles challenge Monsterex and are handily defeated; left to lick their wounds as the beast escapes into the city. Pleased with his creation, Krang ignores the Turtles, hoping to find a way of controlling Monsterex.

Recognizing the dilemma, Splinter tells the Turtles to follow him. Traversing forgotten corridors, they come upon a library where the Bookwurm lives. Bookwurm (a mutant worm-man of outstanding intellect) happens to be an old friend of Splinter’s and the sensei asks what he knows of the four individual monsters comprising Monsterex. Bookwurm reveals that they were all inspired by real monsters of folklore and, after thumbing through some of his volumes, deduces that, all originating from Medieval times, they’re likely to seek sanctuary in a castle. Knowing that the nearest castle is in the Magic Castle amusement park in New Jersey, the Turtles and Splinter board the Turtle Blimp and take off. 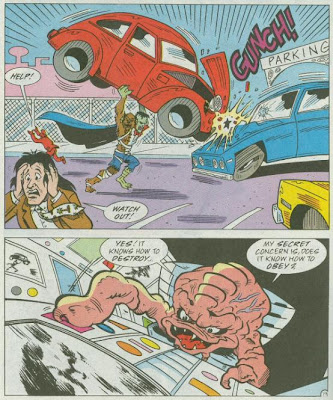 Outside said amusement park, patrons flee as Monsterex takes over. April arrives on the scene in the Channel 6 news van, hoping to cover the action, but is quickly targeted by the villain. The Turtles arrive just in time, rescuing April from the monster’s clutches. The Turtles attack Monsterex, but he’s still too powerful for them to handle. Monsterex fights them to a standstill until the light of dawn approaches. Fearing the sun, Monsterex retreats into the river and vanishes.

The Turtles concede that they were ineffectual against Monsterex, but April assures them it was still a victory since Monsterex is the one who ran away. Ready to celebrate, the Turtles realize they have the amusement park all to themselves and charge in for some free rides.

*Specifically, I would say it takes place shortly before “Origin of the Species”, as that was a winter-themed story and this is a fall-themed story.

*Bookwurm will appear again in April O’Neil: The May East Saga #2.

Finally, the TMNT Adventures Specials are starting to get interesting! Discarding the environmental messages that dominated the previous two installments, this issue is more about having fun than anything else (the only message is in the next story, and it’s done pretty well; but that’s a separate review).

One of the best things about the TMNT Adventures Specials is that they tell stories taking place at different points in the TMNT’s timeline. So while Krang was written out of the ongoing pretty early on, these Specials give him a couple more opportunities to shine. Likewise, characters like Man Ray and Cudley the Cowlick will get a few extra appearances in, we’ll see peeks back into the post-apocalyptic future era of "The Future Shark Trilogy" and we’ll get to revisit many of the other more carefree times of the series. It’s a pain in the ass for me, because I’m trying to put together a timeline and string all the stories together, but it’s still a fun idea.

Anyway, “The Night of Monsterex” is a pretty thin story, but I love it for the classic “Krang makes a mutant to menace the Turtles” vibe that takes me back to the old Fred Wolf toon. Krang was almost completely uninvolved in battling the Turtles in TMNT Adventures, delegating that task to the Shredder (unlike in the Fred Wolf cartoon, Shredder and Krang were never equals), so it’s interesting to see him taking a solo approach to handling the situation... One that involves randomly blasting New York with lightning until he happens to hit the Turtles’ lair. Unfortunately, the actual threat of Monsterex boils down to nothing, as he vanishes unceremoniously and Krang just sort of shuffles off to ponder a means of controlling him.

Stanley Wiater writes a fun story, but his dialogue is stilted as hell; no one really sounds like they’re having a conversation, but talking at each other. They speak in these weird non-sequiturs and there’s a lot of hammy “nuggets of wisdom” being traded around. Ken Mitchroney (who had stepped down as main artist for the ongoing by this point) breathes a lot of life into this story that on the script-alone wouldn’t be very good. But lively, energetic art is one of Mitchroney’s gifts and he can make lemonade out of just about anything.

Unfortunately, nothing can hide the fact that the Turtles and Monsterex arrive at the amusement park “just before dark” (as a patron says), fight for a page, and then suddenly it’s dawn. There’s no indication that the fight went on for hours and hours; in fact, they even point out that it was short and sweet. This makes the convenient resolution of the dawn feel even sloppier.

“The Night of Monsterex” isn’t what I’d call a very solid story, but it offers an appearance of Krang in TMNT Adventures, which was rare, and some sweet Mitchroney artwork.