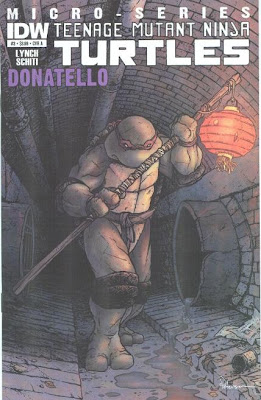 Donatello, the tech-savvy Turtle, considers his relationship with his three brothers and how he cannot connect with any of them. Mike likes computers… for you tube videos. Raph likes computers… for weight-lifting. Leo likes computers… or just pretends to for the sake of making conversation. Still, Don manages to socialize via internet forums under the screen name “duz_machines_84”. Online, he’s made many friends, but also enemies, including the arrogant and rampant misspeller, “kirby_fan01” (who tends to use the word “obstruse” a lot). Don brushes off the dork’s snide remarks and accepts an invitation from “prof_J_perry” to attend the New World Expo, a convention showcasing the latest and greatest in scientific achievement. 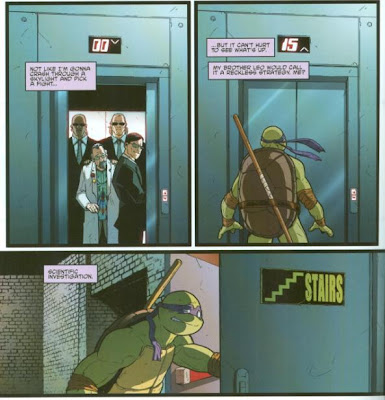 Cloaked in a trench coat and fedora, Don observes all the crazy gadgets with nerdy glee, eventually coming upon the booth of eccentric Harold Lillja. Lillja shows off his anti-gravity gauntlet/cloaking device to the expo judge, only to accidentally destroy a hot dog cart and get disqualified. While Harold protests, the judge leaves, making a suspicious call on her headset. As Lillja begins to pack things up, a group of black-suited spooks approach him, seize his equipment and “insist” that he accompany them to parts unknown. Sensing trouble, Don loses his disguise and follows from the shadows.

As it turns out, Lillja was brought to the offices of one Baxter Stockman, who insists that he’s Lillja’s biggest fan. Stockman provides a brief account of Lillja’s career: that he was an up and coming scientist many years ago, but fell into obscurity when his partner stole all his work. Baxter insists that he funded the Expo strictly to lure Lillja out of hiding and make him an offer. In exchange for fame and fortune, all Lillja would have to do is locate a single mutant turtle and extract its blood (Don doesn’t like the sound of that). Lillja is confused, so Baxter offers him a DNA tracker that will lead him directly to his target; he need only use his amazing inventions to detain the specimen. Lillja turns on the tracker and, low and behold, the laser beam directs their attention to the mutant turtle standing in the corner of the room. 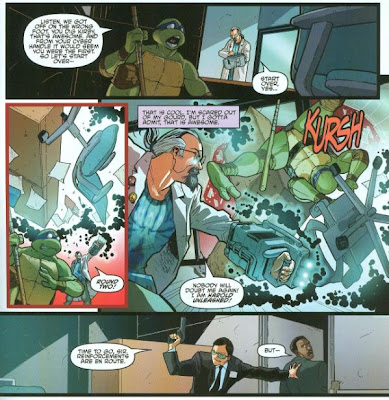 Don subdues the gun-toting spooks while Baxter escapes to summon reinforcements. Don tries to talk Lillja out of making a deal with the devil and through a few choice mispronunciations (“obstruse”), Don realizes that Lillja is “kirby_fan01” and Lillja realizes Don is “duz_machines_84”. Unfortunately, Lillja is stubborn and wants to prove his genius to the world, so he hits Don with his anti-gravity gauntlet’s power. Don doesn’t want to fight the old man, though, and after a few more blows figures out that the gauntlet is powered by the user’s own bio-energy. Once Lillja exhausts himself, Don recommends some techno-babble that might help fix the power source problem. As armed reinforcements arrive, Don asks Lillja to make his choice: will he do the right thing, or join with another partner that only wants to steal his inventions for insidious purposes?

Lillja sides with Don and helps to clear the field for a moment. Don borrows the gauntlet from the exhausted Lillja and powers it himself. Grabbing Lillja and blasting the beam into the ground, they go flying through the skylight and across the city (where they land “safely” in a tree). 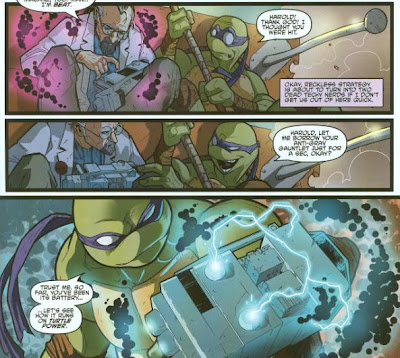 Climbing into his Ford Pinto (he was probably safer when armed guards were shooting at him), Lillja doesn’t exactly have the kindest of parting words to Don. Knowing that now he’ll have to go into hiding from Baxter, he blames to Turtle for the trouble he’s about to endure; changing his identity, address and screen name.

Back at the Lair, Don tells what he’s learned to Splinter and his brothers. With the debriefing over, he sits to play a new MMORPG, “Strangeness”, and maybe cheer himself up. Logging in, he receives a message from “captain_obstruse” asking if “duz_machines_84” would like to join his campaign.

Despite the protests of Raphael, Leonardo and Donatello, Michelangelo refuses to admit a fifth Turtle into their group: Picasso. Observing the cubist weirdo, Raphael considers that at least he isn’t as freaky as their previous consideration: Warhol (a can of Campbell’s turtle soup).

*This story is continued from TMNT (IDW) #6. Chronologically, the next story is Infestation 2: TMNT #1.

*This issue was originally published with 4 variant covers: Cover A by David Peterson, Cover B by Schiti and ScarletGothica, Cover RI-A by Peterson and Cover RI-B by Kevin Eastman (reproduction of original Donatello #1 cover).

Donatello’s never been one of my favorite Turtles in years past, as I always found him a bit too much of a “Mary Sue” archetype. He could turn a starmobile into a blimp in under half an hour, and in more than one continuity, he turns beat-up vans into “party wagons” and “battle shells” all by himself. How does he do this? Is he REALLY that smart? Is anyone on the face of the planet REALLY that smart? He also speaks multiple languages, flies spaceships, “hacks” computers… any time a convenient resolution for a conflict is needed, and there’s a tech-related “out”, Donatello just happens to be an expert on that subject. Problem solved, roll the credits.

And that goes for Mirage, too! Dude built a giant freakin’ robot turtle in one issue because, I dunno, that’s just what he does on Tuesdays.

IDW’s Don, however, has turned me around on the character, little by little. Over in Waltz’s ongoing, Don has been less of an absurd and convenient techno-prodigy and more of an analytical skeptic. He argues with Leo about strategy and openly doubts Splinter’s story about their origin as reincarnated Japanese children (going so far as to conduct his own investigation into the subject, because he just can’t buy it on faith). This Don has an attitude, which keeps him from disappearing into the background until someone needs a computer to be hacked and he’s given permission to step out of the scenery. But he isn’t so much of an antagonistic contrarian as he is an individual who expects observational evidence to support outrageous claims or demands a good reason to do something he considers stupid or inefficient.

IDW’s Donatello feels like the most well-rounded the character’s ever been, and that trend continues in this microseries installment.

Brian Lynch and Tom Waltz continue Don on the same track at the story’s start, showing that he’s just too different from his brothers to really get along with them (in a nice parallel to the opening of Michelangelo’s microseries, which featured a similar sequence). Being a shut-in due to his freakish appearance, naturally he ends up making friends online and it’s nice to see Don branching out into socializing in his own way. In fact, that’s sort of been a theme in IDW’s series, lately, as all the Turtles save Leo (so far) have been making human buddies at a steady rate. Of course, this dulls the “outcast” aspect of their character at a glance, but at least in the case of Don, he still has to bundle-up in a (rather unconvincing) disguise just to attend a convention. So the “outcast” quality is still there, even if the Turtles have 2 or 3 human friends.

Incidentally, for the “brainy” Turtle, I found that Don’s microseries chapter was funnier than Mike’s, the “comedian” Turtle. While much of the humor stemmed from Lynch’s and Waltz’s script, I think Valerio Schiti’s highly expressive art style is what did it for me. There’s a great lot of energy to the characters and the action, and I dug the “Kirby dots” whenever Lillja used his gauntlet (a nice throwback to the Kirby character of the Mirage series, who in turn was an homage to Jack Kirby-himself). Moreso, though, Schiti infuses a wonderful amount of personality into the characters, particularly in the way he exaggerates Don’s eyes.

Also, I really liked the characterization of Baxter in this issue. He’s charismatic, but in a devilish sort of way; like he’s making you an offer you can’t resist even if it’s clear as day there’ll be a catch. His glowing admiration for Lillja was really well done, as you could tell it was all bullshit (his aide even suggests going with the runner-up at the end; Lillja was nothing special to Baxter) and that summation he gave of the man’s career read like he skimmed his Wikipedia article a minute before he entered the room (the brevity of which Lillja similarly comments on). IDW’s Baxter just seems so… competent. In Mirage, Baxter was a cliché mad scientist who never really reached his full potential, even after he became a cyborg. In both the Fred Wolf cartoon and the 4Kids cartoon, he was an abused lackey and perpetual screw-up. But here, Baxter seems like real villain material.

I can’t really find much to harp on about this issue. There’s another string of Fred Wolf cartoon references being hurled at the audience, and I’m wondering how long it’ll be before Waltz, Lynch and the rest of the IDW crew run out of them; they’re exhausting the lyrics of the theme song at a rapid rate. I mean, it’s cute and that’s fine, but maybe some more moderation? And though there’s no indication in this issue that it’ll happen, and it is more a case of me being paranoid, I do hope that Don stays more within the realm of “reasonable genius” and doesn’t start building shell-cycles and sewer-sliders and portable portal generators and all other manner of sci-fi machinery any time soon. Part of the appeal to IDW’s Don is that he's smart and techno-savvy, but he isn’t capable of building a hi-tech battle van on a lazy Sunday afternoon just so Playmates can hock some more vehicles for the fall toyline.

Grade: B+ (as in, “But one last compliment; the coloring by ScarletGothica and Ilaria Traversi was excellent”.)