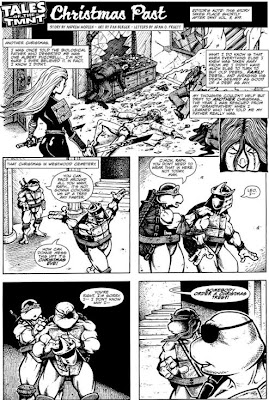 In Earth’s post-apocalyptic future, it is Christmas and an adult Shadow Jones finishes slaying a trio of old mobsters. She thinks to herself how, for the longest time, she didn’t want to believe that her biological father was murdered mobster Albert Puzorelli. However, when she lost everything, old family debts were all she had left to keep going, and so she made it a priority to kill those who killed her father. Reflecting on the date, she thinks back to the Christmas after she was rescued by Michelangelo from her biological grandfather, Tony Puzorelli… 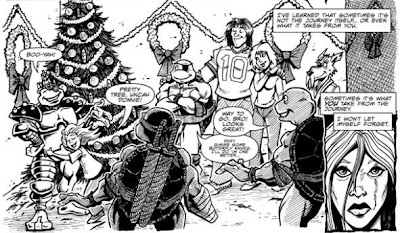 In a mausoleum in Westwood cemetery, Raph (wearing his Shredder helmet) paces around anxiously, wondering when Don would be back with their Christmas tree. Leo tells him to relax and take off that stupid helmet before the rest of the family arrives. Suddenly, cyborg Don comes running down the stairs with a less-than-stellar-looking tree in tow. April, Casey, Shadow, Mikey and Splinter come in to join the festivities, as Don transforms his hands into buzz saws and trims the tree (Leo says he’d lend a hand, but he’s currently missing one). As the young Shadow gives her uncle Don a big hug, everyone enjoys a Merry Christmas.

The memory over, Shadow vows to never forget what she has learned from her journey through life, no matter what said journey has taken from her.

*According to the editor’s note, this story takes place shortly after TMNT (Vol. 3) #19, but the narrative between TMNT #19 through #21 is simply too tight to allow for this story to take place. Conceivably, it could take place between TMNT #21 and #22, assuming Raph returned to the Lair to celebrate Christmas, then returned to Foot HQ for his battle with Pimiko. It cannot take place before #19, as Leo loses his hand in #18 and that issue ends with the Mausoleum Lair being invaded by government spooks. It cannot take place after #22, as Raph had been deposed as Shredder by then.

*Raph offers to trim the tree with butterfly knives, as he did in Leonardo (microseries) #1.

*This story was originally published online at the Technodrome Forums by Andrew Modeen in September of 2010. It did not make its in-print publication until 2012.

Although author Andrew Modeen had made this story available online a few years ago, I wanted to wait until it finally saw print before reviewing it.

Tales of the TMNT (Vol. 2) #69 was one of the best Turtle stories ever written (the only reason it didn’t make my list of “25 Greatest TMNT Moments” was because it was published after I wrote that article), so seeing artist Dan Berger draw a 2-page callback to that story was a pleasant surprise. The future pretty much sucks for Shadow and she’s left so directionless that she’s no purpose in life but to avenge the death of a scumbag father she never even knew. It can be hard to imagine her future being painted any bleaker than in “Dark Shadows”, but Andrew Modeen finds a way.

Still, there’s a faint glimmer of hope toward the end, as Shadow contemplates that despite everything she has lost throughout her life (and by “everything”, I mean everything), she still has her memories of better days and what she learned from those life lessons, and that can never be taken from her. Hey, silver linings: you seize them wherever you can find them.

As a callback to Image’s TMNT Volume 3 series, the story both does and doesn’t work. Much like how the Tales of the TMNT (Vol. 2) #46 story, “Temps” was a good issue that attempted to wedge itself into a narrative with no room for it (“City at War”), “Christmas Past” is a good back-up that tries to wedge itself into a heavily serialized volume that offers nearly no narrative gaps where it can slot in. So like “Temps”, when you take the story completely on its own, it has a lot of heart (for 2 pages) and is a nice piece. But if you try to think about it any deeper, at least regarding chronology, you hit some speed bumps. Between #21 and #22 is the only place I could find where it can be squeezed, but it relies on Raph doing something counterintuitive to the narrative flow of the story (much like “Temps” requires April to return to New York for an afternoon, then go back to California, THEN make her triumphant return to New York a few issues later).

Still, as a follow-up to Berger’s “Dark Shadows”, it paints an even more dismal picture of Shadow’s future and I think that’s the half of this story that’s most important (really, the Volume 3 Turtles could have been swapped out with the Turtles from any other point in their timeline and as long as the theme of “a wonderful Christmas” was still present, it wouldn’t have mattered). I appreciate Modeen writing it and Berger taking the time to draw it (he’s one of my favorites). And thanks to Adam Pruett for lettering it, too!

Grade: C+ (as in, “Cyborg-Don looks almost not-terrible when Berger draws him!”)
Posted by TMNT Entity at 1:00 PM