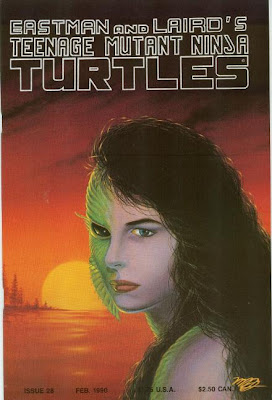 “Sons of the Silent Age”

High above the rivers of Northampton, a bald eagle soars. It swoops down to pluck up what it thinks is a fish, only to have scaly hands claw at it in defense. 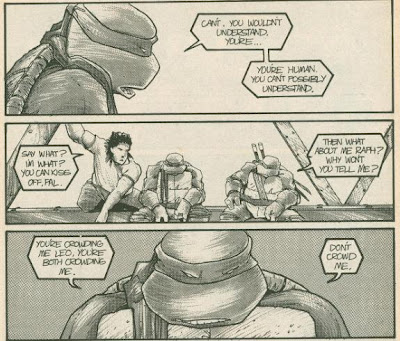 On a lonely bridge spanning the river, the Turtles, Casey and April are hanging out, though Raph sits apart from the pack. Leo tries to get Raph to talk about what’s bothering him, but the melancholy Turtle’s lips are sealed. Casey joins in, but Raph rejects him, explaining that a human couldn’t understand what he’s feeling. As Leo and Casey leave him to sort his problems out alone, Raphael thinks back to what he’s been through lately: his rash behavior nearly getting himself and his brothers killed during their assault on the Foot HQ and his recent de-mutation during their encounter with Bloodsucker.

Casey snaps everyone up and as darkness falls, the gang board a raft to head down stream for the weekend. Keeping a journal, April notes that everyone has been on edge at the farmhouse for the past few months and it was Splinter’s idea that they take the camping trip to clear their minds. As they float downstream, they pass a nuclear power plant and April is disgusted and frightened by its presence. Diverging off the main river and down an obscure side-stream, none of them notice several strange fins following their raft. 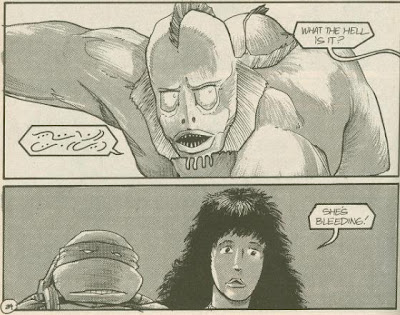 Making camp, Casey regales the audience with stories of his favorite barroom brawls while Raph shuffles off to the water’s edge to be alone. Suddenly, a strange female fish-person comes crawling out of the water, seemingly poisoned and dying fast. Casey is apprehensive but April wastes no time trying to help the poor creature. Together, April and Casey attempt CPR.

Unfortunately, four male fish-people come storming out of the river, not trusting the two humans pounding on their female’s chest. The Turtles keep the four males busy with a fight while April and Casey continue to do their best, though the female is not responding. As the light dims in the female’s eyes, April becomes hypnotized in her gaze. She finds herself looking back in time, to the days when similar fish-people populated the area in peace. Centuries later, they even befriended native Indian tribes, though both were driven away by encroaching white settlers. The poisons of nearby pollutants began destroying their habitat and one-by-one, their race died off. She is the last female of her species and the four males are the last of their gender, as well.

April pulls down the female’s eyelids as she dies. 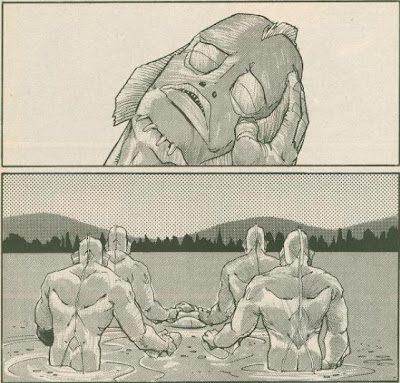 Seeing this tragedy, the four males cease their aggression and solemnly carry their lost number back into the river. As she watches them disappear in the waves, April realizes that the Turtles share a similar burden as the only males of their kind, doomed to extinction. She finally understands Raph’s pain.

Later, the bald eagle succeeds in plucking a fish from the river. The bird carries it to the rim of the power plant’s smokestack and proceeds to devour its prey.

*This issue was adapted into the 4Kids TMNT episode “Sons of the Silent Age”, though its message and narrative were radically altered.

*Because this issue acts as an epilogue to TMNT (Vol. 1) #26, that is why I think it fits best directly after that story and before TMNT (Vol. 1) #27. The reason I place this story after TMNT (Vol. 1) #45 is because the Turtles are situated in Northampton, which is where they were shown to be staying shortly before “City at War” kicks off. As they gave away their sewer lair in Tales of the TMNT (Vol. 1) #6 and thus had nowhere to live in New York City, it seems best to group all the post-TMNT #21 New York stories and post-TMNT #21 Northampton stories together, rather than flip-flopping back and forth as they were published.

Whew, this was some heavy stuff.

I give Steve Murphy a lot of crap in my reviews for TMNT Adventures (which he wrote under the pseudonym “Dean Clarrain”) and most of it revolves around the nonstop assault of environmental messages and guilt trips. But that has more to do with their overwhelming frequency and the fact that the messages are not written very subtly or even very well.

“Sons of the Silent Age” is a different matter altogether. This is one of the best issues of TMNT (Vol. 1) or at least one of the best issues to have a message to impart on the audience. It reflects on the trials the Turtles have so recently undergone, acting as an epilogue to “The River” and a callback to “Return to New York”. It isn’t often enough that we see the Turtles emotionally dealing with the horrors and tragedies they have endured and it tends to either make the characters seem callous or the writing insincere. While I wouldn’t want a series with too many “stop and cry about it” issues, they are needed every now and then to display the humanity and emotional depth of our cast.

But what Murphy does is he takes that sort of story and wraps a chilling and saddening message in it about extinction, the environment and what we’re doing about it. This isn’t written like his finger-wagging sessions from TMNT Adventures; no one stops to tell you what you should be thinking and the lesson isn’t awkwardly summarized for the audience’s digestion. The two themes compliment one another and it all meshes into a highly thought-provoking tale.

“Sons of the Silent Age” helps you better understand Peter Laird’s long-time “no girl Turtle” stance all the better (Venus de Milo was Kevin Eastman’s creation), as providing a female takes away the understated tragedy of the TMNT’s very existence: they’re all male, they’re four of a kind and when they die they will leave behind no genetic legacy. Total extinction. I think it makes what the Turtles do all the more important, as they have no descendants to succeed them and only their actions and impressions will be there to remind the world that they ever existed at all (and being ninja who cannot be seen in public and have to keep their existence a secret… that makes it all the worse).

The environmental messages are there and they are important, but they aren’t laid on thick. The bald eagle (the national bird of the United States of America) plucking up a fish and devouring it while nesting on the edge of a smokestack is a particularly vivid bit of imagery, given the circumstances of the fish-person that just passed away due to poisoning from an American nuclear power plant. What the message in this story does is make you think. For yourself. It doesn’t tell you what to think; it presents you with a haunting story packed with commentary and leaves you to come to your own conclusions. If only TMNT Adventures had more stories like this in it.

On that note, I’ve always considered the 4Kids TMNT cartoon’s “adaptation” of this story to basically be what “Sons of the Silent Age” would have been like had Murphy written it for TMNT Adventures. It is a butchered abomination of the source material, getting every last theme wrong and laying the environmental messages on thickly and obnoxiously. The female fish person survives along with her eggs, ensuring the survival of her people and a happy ending. No allegory is made to the Turtles’ situation. And worse than all that, the bulk of the episode revolves around the Turtles, April and Casey trying to take down a crooked power plant that’s leaking toxic waste into the river, driving home the “GO PLANET!” message to the kids rather than letting them think for themselves.

It is absolutely wretched and I can’t fathom why Murphy even bothered writing it at all if he was just going to discard every theme and plot point that made the original version so meaningful.

Anyway, I’ve developed a reputation for hating on the environmentally themed TMNT stories, but I don’t hate them because they’re environmentally themed. I hate them because they’re badly written. “Sons of the Silent Age”, however, is wonderfully written and forces readers to stop and think not only about the fictional characters within the story on a whole new level, but perhaps real world matters that directly affect them, too. Rather than tell you what to think, it makes you think. And that’s the difference.

Grade: A (as in, “Although lots of new male Turtles seem to be okay with Laird; Slash, Tokka, Kirby, Hun, the Dark Turtles and, um, do Metalhead and Turtlebot count?”)
Posted by TMNT Entity at 7:51 PM