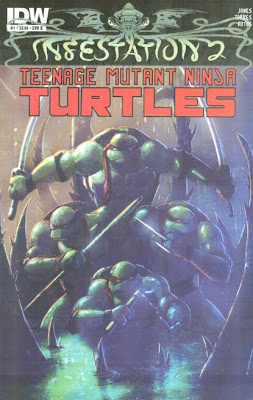 Bizarre storms and tremors have suddenly begun ravaging Manhattan and authorities are at a loss to explain them. Not only have people been vanishing into thin air, but police have recently shot a strange-looking humanoid monstrosity. Donatello tries to get to the bottom of things and begins researching historical cults of the area. As he reads up on a doomsday cultist from Massachusetts named Bloch and his worshippers of “the Black Ram with a Thousand Young”, Mikey calls him to the TV room. Lauren Stanton from Channel 6’s Lateline is going on about how other humanoid creatures have been glimpsed on the streets in recent weeks and how they may be involved with the recent disappearances. The Turtles don’t like being tied into this insanity and wonder how long before cops start combing the sewers. 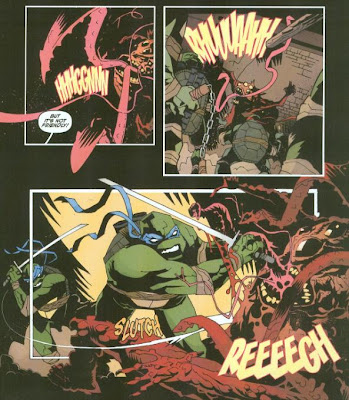 Don soothes everyone’s fears, reminding them that they’re situated in a forgotten rail network extension that isn’t on any map. Suddenly, the lights turn off and a strange noise rumbles from another room. Splinter lights a match and the Turtles take a peek. That’s when they’re attacked by a humanoid tentacle-monster! Leo filets the creature and further inspection finds that it crept through an uncharted mine, lined with human skeletons. Splinter stays behind to dispose of the monster’s corpse while the Turtles spelunk into the cave for answers. 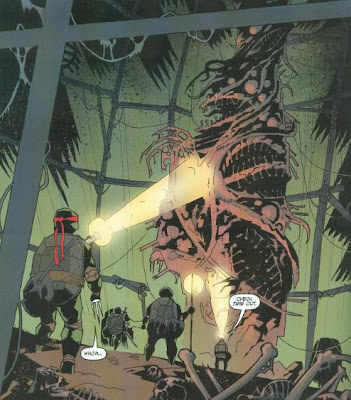 As they traverse the winding labyrinth, they spot weird rats that have been corrupted into monsters. Further along, they spot a gigantic blob-like thing constructed from human bodies (presumably the missing people). Eventually, they find an old workshop where, amongst other knick knacks, is a map detailing all the uncharted areas of the New York underground; including the location of their lair. Don recognizes some of the strange characters on the map as being symbols used by Bloch’s old cult from Dunwich. Mike pokes around and finds some fresh sticks of TNT, meaning that someone has built these mineshafts recently. 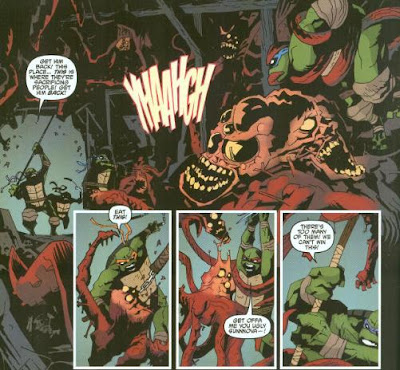 The Turtles continue with their investigation, only to be besieged by another tentacle monster. The creature takes off with Leo as dozens more swarm the Turtles. Mike sets off a stick of TNT to try and kill the creatures, but only causes a cave-in, separating himself and Raph from Donatello. Don begins digging at the rubble as the tentacle monster pulls Leo underwater.

*Lauren Stanton originally appeared in the Mirage comic Tales of the TMNT (Vol. 2) #59.

*This issue was originally published with 3 variant covers: Cover A by “menton3”, Cover B by Livio Ramondelli, and Cover RI by Torres and Ramondelli.

You know, I really appreciate how IDW has been handling their company-wide “Infestation” crossover events. They’ve been doing them in a way that doesn’t require you to read any of the other tie-ins if you don’t want to, or even the main miniseries. The “Infestation” plots slink into and out of each series without disrupting the book’s narrative or forcing consumers to buy a crap-ton of books they really don’t want just to figure out what's going on.

God, when was the last time a comic publisher did a crossover event like that? Any of you remember DC’s “Infinite Crisis” event, with the four lead-in miniseries, each with their own tie-ins and tie-ins to the tie-ins? One of the lead-in miniseries, “The OMAC Project”, even had its own mid-miniseries miniseries, “Sacrifice”, where you had to go buy four other Superman books in the middle of the miniseries before you could finish the miniseries just so you could read the “Infinite Crisis” miniseries! Oh yeah, and you STILL had to buy “The OMAC Project” special oneshot to get the conclusion!

These bullshit company-wide crossovers that happen every year like clockwork are one of the reasons I quit reading Marvel and DC. I'm not made of money, assholes!

But IDW’s found a way to make it work that doesn’t gouge the wallets of their audience, and that shows a sort of integrity as publishers I can’t praise enough. Thank you, IDW, for letting me not buy books I don’t want to buy just to read one coherent story!

Anyway, while the first “Infestation” event dealt with vampires, this one is all about Lovecraftian critters from the Cthulhu Mythos. As an avid fan of H.P. Lovecraft and his weird fiction contemporaries, “Infestation 2” held far greater interest to me than the last go-around. Author Tristan Jones, who is no stranger to Ninja Turtles (having written the “Gang Wars” arc from Tales of the TMNT Vol. 2), crafts a suitably interesting horror story that manages to draw the Turtles into the “Infestation 2” events without feeling too contrived.

You can tell Jones has really boned up on his Cthulhu Mythos, as I dug all the little references and allusions to Lovecraft’s work that were littered about this issue. The Turtles finding a cavern populated by eerie rats and containing a strange amorphic monstrosity called back to “Rats in the Walls”, while the mention of a cult in Dunwich brings up Wilbur Whately and his evil-doings in “The Dunwich Horror”. Meanwhile, the mention of "Bloch" and "The Black Ram with a Thousand Young" seems intended to recall author Robert Bloch's Mythos story "Notebook Found in a Deserted House" (Bloch was the youngest member of the Lovecraft Circle of weird fiction authors).

For readers interested in just a horror-themed adventure, this issue delivers. But Lovecraft junkies like myself will get a little more out of it; appreciating all the well-researched nods to the classic stories.

Artist Mark Torres has an oddly angular style, but I found it fit the tone of this issue really well. His style of character models, and especially his use of shadow, seemed to channel shades of Mike Mignola and “Hellboy” in general. Naturally, that sort of look is a perfect fit for a story about Lovecraftian monsters squirming out of mineshafts and into the sewers and I was pleased IDW selected an artist equipped to convey the mood of the script.

If there’s any setback, I guess it’s that the story might feel a bit “inconsequential”, as just a diversion from the main series so the Turtles can get involved in the company-wide crossover. As far as I’m concerned, though, a good story is never “inconsequential”, so even if you can skip “Infestation 2” and never miss it, that doesn’t necessarily mean that you should. If you like horror-centric stuff, Lovecraft or not, I think you’ll get a kick out of this.