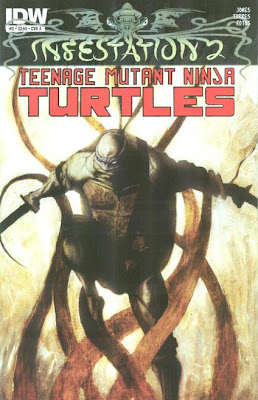 Down in the caves, Donatello finally succeeds in freeing Michelangelo and Raphael from the rubble. Regaining their senses, they proceed further into the darkness to find Leonardo. 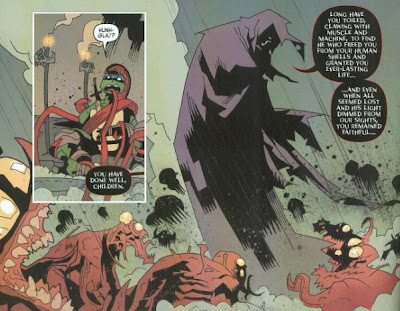 Speaking of Leo, he’s in the belly of the beast, subdued by a bunch of tentacles. A cloaked ghoul lords over him, praising a massive statue of his master, Shub Niggurath. The ghoul explains that he has been feeding Shub Niggurath with human lives for some time, and after he feeds it the life of a creature new and unique to their universe, it will finally be strong enough to consume the world.

Elsewhere, Don follows a series of slash-marks cut into the massive veins riddling the cavern walls, knowing they were left as a trail by Leo. They find Leo’s katana at the edge of an underground lake and, though they know they won’t like it, take a deep breath and dive in. Using the katana to hack away at aquatic tentacles, the Turtles fight their way through the submerged tunnel and arrive at the gateway to the inner temple. At Raph’s behest, Don reveals what he’s pieced together from his readings with what he’s seen down in this Hellhole. He believes that a massive parasite, worshipped by cults for centuries, has been growing deep beneath New York. Through its slinking veins, it has been feeding on life to increase in size and in doing so has infected other organisms (hence the monster rats). Don believes that if they can separate the parasite from its food supply, they can kill it. 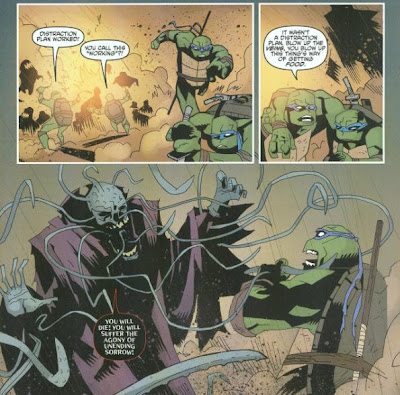 Arriving at the altar, Don frees the unconscious Leo from the tentacles. The ghoul grabs Don, thrilled that the sacrifice of another strange creature will only serve to make Shub Niggurath stronger. Don blows the ghoul’s secret, recognizing him to be the long-dead cult leader named Bloch. The ghoul attempts to stab Don when Mikey detonates the dynamite he and Raph strategically placed at the base of all the veins/tentacles sprawling from beneath the altar. With the veins destroyed, Shub Niggurath can no longer feed. Infuriated, Bloch tries to finish Don when Leo comes to and cuts him to ribbons. 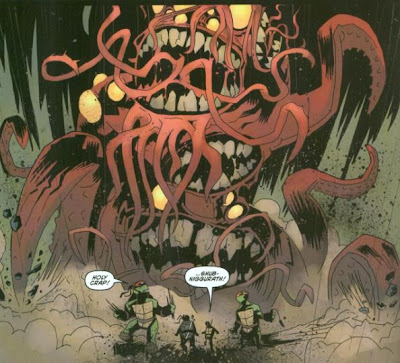 Suddenly, Shub Niggurath shambles out from the depths, intent on eating the Turtles before it starves to death. As Leo keeps it busy, his brothers knock over the massive statue on top of it, squashing the blob-like creature. As the whole temple caves in, the Turtles run for their lives.

A week later, things have mostly returned to normal. Don returns from the library, telling Splinter that he didn’t find anything good. In reality, though, he has procured a bunch of H.P. Lovecraft collections, which he has begun to feverishly dig into. Don has always been an egghead in search of the truth, and he hopes to get to the bottom of the mystery he so recently survived… even if that knowledge comes with consequences. In the darkness, a monster rat licks it’s lips.

*This story is continued from Infestation 2: TMNT #1. Chronologically, the story continues in TMNT (IDW) #7.

*This issue was originally published with two variant covers: Cover A by “menton3” and Cover RI by Mark Torres and Livio Ramondelli.

And that was a thrilling conclusion to a very, very cool two-issue story arc. As a Lovecraft fan, I was naturally inclined to like the “Infestation 2: TMNT” story, but even if you are completely Lovecraft-illiterate, I can’t imagine you not having a great time with this.

As mentioned in my review for the last issue, Jones proves he’s done the research and made sure that this crossover into the realm of the Cthulhu Mythos feels as authentic as possible. Tales of the TMNT Vol. 2 had a lot of Lovecraft-themed stories and they usually fell pretty flat for me, like the author was just going through the motions and using the source material less as inspiration for their own original story, and more as a means of harvesting ideas so they don’t have to come up with any of their own. “Infestation 2: TMNT” felt just the opposite, where the Lovecraftian source was used in a way that felt like it slithered right out of the old stories and into the Turtleverse.

Though Shub Niggurath is referred to as a “he”, whereas the deity is generally given feminine pronouns because she’s kind of like a fertility goddess (hence the “Black Goat with a Thousand Young” moniker), but that’s really me just splitting hairs. I don’t think Shubby has any actual gender to speak of.

"Infestation 2: TMNT" also complements the Donatello microseries, which it chronologically takes place after. Essentially a Donatello spotlight, Jones delves deeper into his personality as a skeptic; I particularly liked how Don rationalized Shub Niggurath as a massive parasite rather than a supernatural sacrifice-munching god.

Torres and Fotos produce another wonderful, Mignola-esque comic that’s spooky and action-packed all at the same time. I really dig their style and I hope that, should there be any more horror-themed stories in the future, IDW makes sure to call them up. There are a couple of bandana coloring errors (Don has Raph’s colors and Mike has Leo’s colors on page 20), but editor Bobby Curnow has owned up to those mistakes online like a boss, so no hard feelings. Though I shouldn’t have, I laughed aloud on page 15. The way the page is laid out, Mike pops up holding a pair of lit dynamite sticks, yelling "Surprise!". Next panel is a huge explosion, so it basically looks like Mike went all-out suicide-bomber. 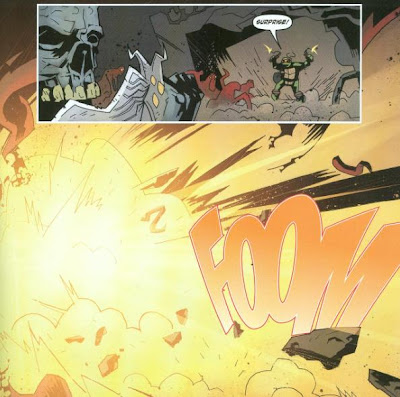 Overall, the “Infestation 2: TMNT” miniseries plus the character-themed microseries have been exactly what IDW’s TMNT comics needed. The ongoing is a very slow-burn serial, which is fine, but without anything to beef it up can leave it feeling a bit tedious. These isolated stories slotting in-between issues, and read in sequence, have done absolute wonders for the pace, satisfying my need for complete, short-form stories without sacrificing the sprawling, complex narrative of the main series.

I’d definitely snag this two-parter if I were you. And you can skip the bookending “Infestation 2” main series if you want; they’re inconsequential unless you’re interested in those unrelated characters.

Grade: B+ (“Bloch wrote the most famous Shub Niggurath story of the Cthulhu Mythos, too, by the way. He also wrote ‘Psycho’, which I'm pretty sure he's more famous for.”)
Posted by TMNT Entity at 10:32 PM