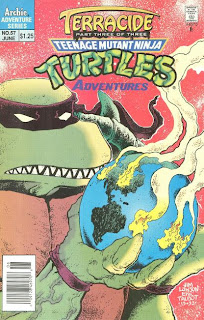 Chapter One: The Dark Side of the Moon

As the Strato-Ray pulls into the dark side of the Moon, the Turtles encounter their true enemy: Queen Maligna and her Hive World. They’re spotted by Malignoid fighter craft and, despite future-Don’s fancy flying, are shot down and the Strato-Ray explodes. 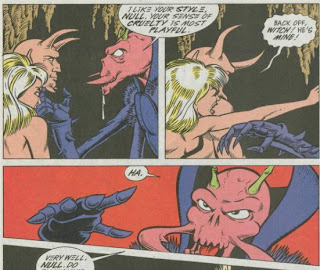 Inside, Queen Maligna titters over her victory and vengeance. Null had gained revenge of his own, introducing Maligna to his new scantily clad pet: the mind-controlled Candy. As Null makes Candy debase herself for his amusement, Maligna drools over the imminent conquest of Earth.

Chapter Two: In the Belly of the Beast

Elsewhere on the Hive World, a time slip opens up. Turns out, future-Don wanted the Malignoids to think they were all dead so that they could sneak aboard the Hive World in secret. Being the only one of the group to have been inside the Hive World before, future-Raph offers to take point. Jealous of his older self, Raph forces his way to the lead on the grounds that he’d been there more recently. As they explore the cavernous ship, Slash relates the story of Palmadise, his homeworld that was annihilated when aliens cut down all the trees, while Ninjara and Splinter tell Raph to stop acting like such a jealous jerk and calm down. 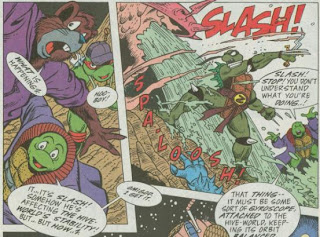 Eventually, they find a pair of Malignoids guarding a weird gyroscope-shaped organ. Slash erupts and kills the Malignoids, but also hacks open the organ. One with her ship, Queen Maligna feels the pain of the organ and now knows the Turtles are onboard. As the Hive World destabilizes, hundreds of Malignoids converge on the Turtles.

Chapter Three: Into the Sun…

Without a stabilized orbit, the Turtles bounce every which way as they battle the Malignoids. The fight continues for some time, and in the chaos, future-Don’s time slip remote is destroyed. After a while, the orbit re-stabilizes and the Turtles slaughter the last of the Malignoids. As temperatures rise, they find Queen Maligna, Scul and Bean repairing the gyroscope. Maligna warns them not to interfere, for if they don’t repair the organ, the Hive World will plummet into the Sun.

Future-Don notices Null making a break for the hangar with Candy in tow. Future-Don gives chase and frees Candy from the demon. Null brushes off his attacks, laughing that future-Don still doesn’t know who he truly is dealing with. Null flies away into space and his hold on Candy’s mind ceases. 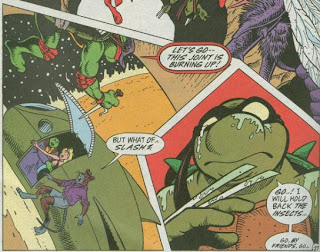 Future-Don calls everyone to board a Malignoid space craft and escape. Slash, not wanting to see another planet destroyed like Palmadise, refuses to follow. Hacking the gyroscope some more, he vows to stay behind and see to it that Queen Maligna and all her evil forces meet their deaths. Shedding a tear, Slash tells his friends to make their escape before it’s too late. As he says this, the Hive World begins to burn up in the heat of the Sun.

*According to the beginning of this issue, despite being published over a year later, the story still takes place in March of 1993.

And that’s the end of “Terracide”.

Between this and “Megadeath”, of all the characters to bite the dust, I was most bummed out by the termination of Slash. As evil and psychotic as he was (he’d killed his share of innocents, if you recall the space police officers he gutted in his first appearance), his life story was a truly tragic one and he’d only so briefly gotten to know peace before having it taken away from him. The guy had it pretty rough. He lost his race, his homeworld, all his new friends and the surrogate home he’d finally found. In the end, the best he could do was murder an intergalactic scourge and ensure that no one else would ever lose as much as he had. Redemption!

For a guy who really only featured in 7 issues (not counting his brief cameos in “Megadeath”), he got a lot of characterization. Of course, I’d loved to have seen more of him, but I’m happy with what I got. And while “Megadeath” was all about killing characters unceremoniously and without a shred of dignity, Slash got to go out with a solid chunk of emotional impact. He was definitely underutilized in this book, but every appearance was a gem.

If there’s one thing in this conclusion that really deserves props, it’s the lettering by Gary Fields. I failed to bring it up in my reviews for the Mighty Mutanimals miniseries, but I’ve got to say, I really dig Fields’ unique lettering for Queen Maligna’s dialogue. Also, I love how he rotates the speech bubbles once the Hive World loses stability, so you have to rotate the comic in order to read them. I believe Dave Sim actually pioneered that trick in his book, “Cerebus” (to simulate a drunken stupor), but it remains an effective and engaging technique that actively disorients the reader.

Despite the heartbreaking death of Slash, I actually felt that this last installment of “Terracide” was comparatively the weakest. It has mostly to do with Queen Maligna’s grand comeback, that only persists for half an issue then she dies. While it certainly facilitated an epic set piece, I felt her inclusion was a bit tacked on and she didn’t offer anything else to the story other than said set piece.

Null’s escape at the end also felt too abrupt, considering he was the mastermind villain of the story arc. He implies in his parting dialogue to future-Don that his nature is something truly immortal and unfathomable; more-so than just demonic but perhaps even the personification of evil or greed-itself. As a villain, he runs a great gamut of large scale evil (trying to destroy the Earth) and more personal wickedness (forcing a grieving girl to humiliate herself for his own amusement), which is very befitting of a devil, or perhaps THE Devil. But we may never know. There have been musings about the real world individual Murphy (Clarrain) may have based Null on, and if such suggestions are the truth, then it puts the idea that Null is immortal and inescapable into a new light.

Still, in every arc he appears in, he ends up hiding behind other villains (Maligna, the Four Horseman, Maligna again), and though that is clearly his modus operandi, it somewhat diminishes him as we never get to see what he can REALLY do.

“Terracide” is one of the strongest arcs in all of TMNT Adventures and, pound for pound, I prefer it to the much more revered “Future Shark Trilogy”. Though it sprang from a rather loathsome storyline, it is much less convoluted and contains less moments of hasty exposition. The amount of violence and innuendo may seem completely over the top (the Turtles stand triumphantly atop a pile of Malignoid corpses, covered in blue blood... then there’s the matter of Null and Candy), but it actually serves a purpose. It isn’t there to shock but rather to appropriately illustrate the scale of the forces the protagonists are up against.


Grade: B+ (as in, “Believe it or not, but I have always instinctively read Queen Maligna’s voice as being Andrea Martin doing her Queen Slug-for-a-Butt voice”.)