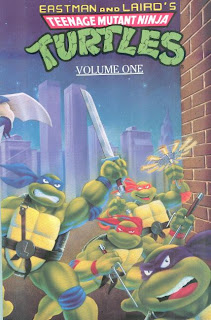 Down in the sewer lair, April is sharing tea with Splinter and tape recording an interview regarding his life and the many adventures he’s shared with his sons. 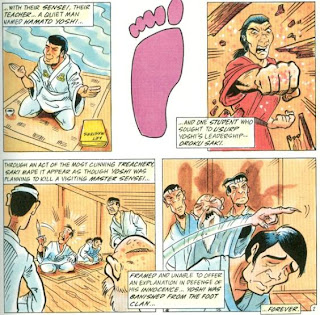 Splinter explains that he was once a Japanese man named Hamato Yoshi, who was leader of an honorable ninja clan called the Foot. One day, he was framed for the attempted assassination of a visiting sensei by his rival, Oroku Saki, and banished to America. His honor forbidding him from begging or stealing to survive, Yoshi went to live in the sewer, where he befriended the rats.

The Turtles nicknamed him “Splinter” on account of his old walking stick and he in turn named them after his favorite painters: Leonardo, Raphael, Donatello and Michaelangelo. He then began training them in the art of ninjutsu. 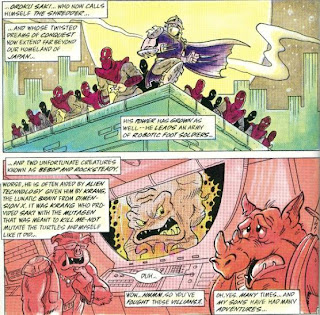 Eventually, Splinter’s old nemesis, Oroku Saki, returned from Japan as leader of the Foot Clan; now a villainous organization. Taking on the identity of the Shredder, he amassed an army of robot Foot Soldiers thanks to Krang, an evil warlord from Dimension X. The Turtles would go on to have many encounters with Shredder, as well as other foes, which Splinter happily relates to April in detail…

Having finished hearing of the Turtles’ adventures up through their encounter with Codename: Chameleon, April is still left with many lingering questions. What did Stump and Sling have planned for Wingnut and Screwloose? What ended up happening to Leatherhead? And how did the “Final Conflict” turn out? 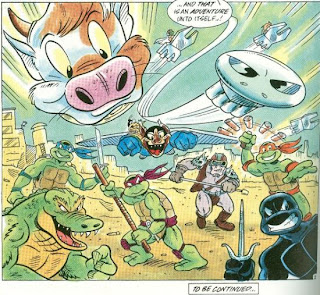 Splinter pours another cup of tea and tells her that those stories shall all be told in due time.

*The prologue was later reprinted in TMNT Adventures Digest Vol. 1, but the epilogue has never been reprinted.

*All issues in this collection were re-colored by Steve Lavigne, Michael Gaydos, Denise St. Laurent Lavigne and Mark Bode’.

My “Holy Grails” of TMNT collecting are typically pretty modest, as I don’t aim for the more expensive stuff. Mostly, I’m just out to get a copy of every story and I’m not too particular about things like print numbers or what have you.

The prologue and epilogue from Tundra’s TMNT Adventures reprint was one of those Holy Grails, as the thing was just a pain in the ass to find. It seems that sellers rarely listed it on eBay and not many fans in the Buy/Sell/Trade forums were looking to part with their copies. Eventually, I was directed to one on eBay that had slipped past my notice and snatched it up for $8 bucks. Not bad!

“Metamorphosis” is your typical prologue summary stuff, but with the added bonus of being penciled by Ken Mitchroney. It’s nice to see his take on the origin story and I found this go around at it better-looking than his next attempt, TMNT Adventures #45, which ended up looking like a rushed fill-in issue.

So far as any added insight goes, the only scrap of “new” information is that Yoshi chose to live in the sewers because his code of honor forbade him from begging or stealing. Not… much, sure, but whatever. I’m in it for the art.

Mark Bode’s coloring is nice and lavish and he does a particularly good job in terms of “lighting”. I wasn’t quite so hot on the recolors of the reprinted issues; the only stories I felt they actively improved were the ones penciled by Jim Lawson.

All in all, I spent $8 for 10 pages of new material, and I’m cool with that. I’ve paid more for less. The bookends don’t really add anything new to the experience, and in a few places are a bit contradictory (April acts like she’s just now learning that Splinter was Hamato Yoshi, when he already explained that to her when they first met). I wouldn’t really recommend going out of your way to get it unless you’re like me and want to have a copy of every story. Even then, I’d say don’t pay too much. 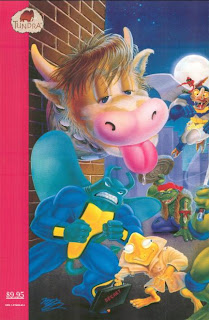