Yo-Ho-Ho! And a Bottle of Mutagen! 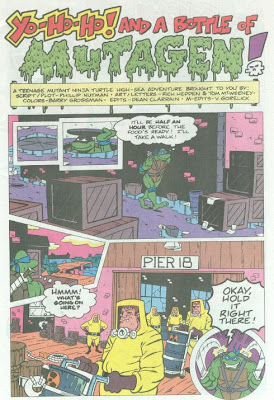 Down in the lair, Leo and Raph are sparring. Leo is too reckless in his technique, allowing Raph to lead him into a wall like a charging bull. Splinter orders Leo to go pick up their pizza for dinner and tells Raph to practice his mirror technique as punishment for being too rough with his brother. Meanwhile, Splinter, Mike and Don sit down and watch April’s newscast. Apparently, New York City has decided to ship its toxic waste and assorted garbage to South America for disposal; a concept the Turtles find grotesque. The garbage barge containing the waste is scheduled to leave New York Harbor that very night.

Waiting for his pizza, Leo decides to go for a walk along Pier 18 and finds a gaggle of pirates in hazmat suits purloining cans of toxic waste. Leo leaps into action, but his carefree attitude leaves him open to an attack from behind, knocking him out. Leo awakens a little while later, tied up and being hovered over by a creepy pig-guy. 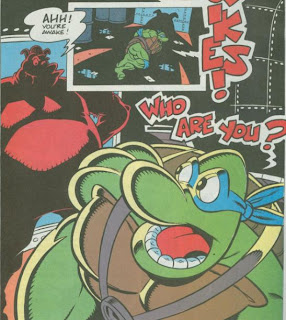 Back at the lair, Splinter is meditating and gets the sense that Leo is in danger. He tells the Turtles to go to the docks and find their brother. They search around Pier 18 and find the old watchman bound and gagged. He explains that a group of pirates ambushed him and stole the toxic waste that was meant for the garbage barge.

Undersea, Leo is freed by the pig-guy, aptly named Pig-Foot. He explains that they’re both prisoners onboard the Sea Cow submarine. Going into origin recap mode, Pig-Foot says that he was once a merchant mariner named Ben who carried toxic waste across the ocean for proper disposal. He was ambushed by Captain Blythe and taken prisoner. Blythe’s boss, the mad scientist Dr. Ruthven, experimented on him with the mutagenic waste and turned him into a pig mutant. Now a freak, Pig-Foot was left no choice but to work for Captain Blythe.

Returning to the lair, the Turtles bring their findings to Splinter, fearing that Leo might have been kidnapped by the Shredder. Meditating, Splinter sends his astral projection out to find Leo and locates him in the Sea Cow. The stress is too much for Splinter and he faints.

On said Sea Cow, Leo attempts an escape, but Captain Blythe takes him down with the help of his mutant canine, Sea-Dog. Blythe then successfully attacks the garbage barge, stealing the last of the toxic waste. Contacting Ruthven, Blythe tells him of his success and that he has a surprise in store: a true mutant to experiment with. Running around his spooky castle, Ruthven gleefully celebrates the imminent dissection.

Awakening, Splinter tells Don to contact April at Channel 7 while he, Mike and Raph attempt to form a psychic link with Man Ray, as his nautical prowess is their only hope of rescuing Leo from the submarine. They successfully contact Man Ray in his secret base off the Jersey Shore and he races to their aid in his stealth submarine. 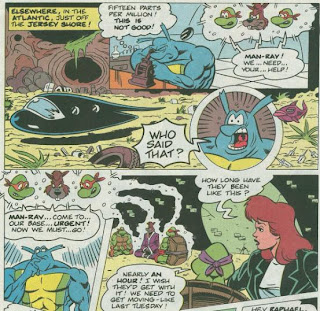 On the Sea Cow, Blythe decides to have some fun and forces Leo to fight Sea-Dog. Not as strong as the canine, Leo realizes he can never beat Sea-Dog in a boxing match. So instead, he finally learns to use his wits and think through the battle. Copying Raph’s move, Leo tricks Sea-Dog into charging into the other pirates, and knocks him out. Not happy with the outcome, Blythe has Leo tied up.

Picking up Splinter, April and the Turtles, Man Ray heads for the Outer Hebrides of Scotland, where he determines the Sea Cow is headed. They eventually deduce that it will be docking at a castle on Ruthven Island. Inside said castle, Leo is strapped to a dissection table while Ruthven sharpens his instruments. The Turtles infiltrate the place while Pig-Foot hatches his own plan, freeing the other captured mutants of the mad doctor. The Turtles are attacked by the pirates, but Pig-Foot and the Mutants take them down. Pig-Foot then leads them to Ruthven’s lab. Blythe flees the scene, leaving Sea-Dog behind to protect Ruthven. The Turtles kick Sea-Dog, who stumbles over a hunched Pig-Foot, crashes into Ruthven and together they go toppling over the balcony. As the pair of villains fall into the sea, they happen to land on Blythe, who is trying to escape via rowboat. All three evildoers perish in a watery grave. 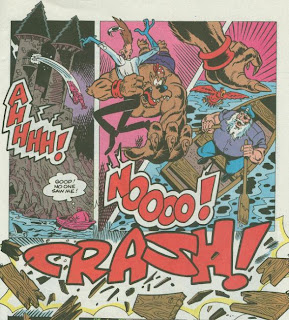 With the pirates set adrift and the Coast Guard alerted, Pig-Foot decides he wants to stay in the castle with the other mutants, as it is their new home. The Turtles, April and Splinter, meanwhile, figure they’ll stick around and explore Scotland.

*The story continues in “Doomsday Hassle in Banshee Castle”.

*Man Ray’s presence means it must take place after TMNT Adventures #5, but Shredder and Krang working together in the follow-up story means it must take place before TMNT Adventures #13. There are only two narrative gaps between issues #5 and #13 that this story could fit; after #5 or after #9. I chose after #9 because it puts some time between their first encounter with Man Ray, giving him an opportunity to build his base and sub.

Well, all things considered, in the grand scheme of Hedden & McWeeney’s TMNT contributions, their TMNT Adventures Special stories were probably their least offensive. I think it has to do with the fact that Philip Nutman wrote the adventure, so it wasn’t the stream of consciousness nonsense of Hedden & McWeeney’s Mirage run. Additionally, their surreal and cartoonish style is a better fit for this brighter kid’s book than it ever was for Mirage.

What makes “Yo-Ho-Ho!” a chore to read through isn’t so much it’s eco-aware content, or the groaners of jokes, or the trite lesson about “looking before you leap”. I think what makes it a pain is just that it is so. Freakin’. LONG. The thing just goes on and on and on to the point of becoming pretty damn tedious. Nutman was never one of TMNT Adventures’ better substitute writers (not as bad as Stanley Wiater, but close) and while the set pieces are fine and the story is plotted well-enough for its absurd length, it’s just bland as all Hell from start to finish.

I also feel inclined to point out that Captain Blythe is, believe it or not, the FOURTH pirate villain/evil sea captain the Turtles have battled in TMNT Adventures. Cap’n Mossback… Captain Agamatta… Murk Mariner… And now this guy. Honestly, ONE pirate villain was more than enough for TMNT Adventures. Four is just pushing your fucking luck, guys.

There’s also the fact that “toxic waste = mutagen”. I guess there’s absolutely no difference in this universe, which doesn’t surprise me, but still. For a book so determined to hammer home environmental messages, it’s kind of hard to impart on kids the dangers of toxic waste when all you ever show it doing is giving people and animals awesome super powers. After reading TMNT Adventures, I think children would be more inclined to drink radioactive run-off than fear it.

Man Ray’s presence is strictly for the purpose of providing a sub to get them from New York to Scotland and nothing more. And where did he get that thing, anyway? Or the Jersey lab? Last time we saw the guy, he could hardly talk in his new mutant form. And the Turtles barely knew him. I guess there’re some missing adventures we don’t know about. Not that I care.

Anyway, this one’s pretty much a snoozefest, and that’s only because I’m feeling kind of generous, today. The follow-up story is actually more enjoyable, but mostly just because it has Shredder and Krang in it.

Grade: D- (as in, “Does cancer count as a super power? Cuz that’s what I got after drinking some ‘ooze’ I found in a barrel”.)