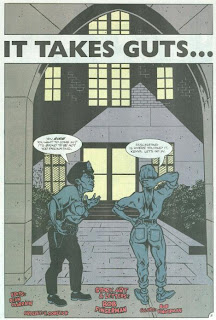 At a diner, April is spending time with her old friend, Officer Kenya Leavitt, who has just been saddled with the graveyard shift (giving her little time to spend with her son, Trevor). Suddenly, dispatch tells Officer Leavitt to proceed to Mercy Hospital to investigate another report of petty theft. April asks to tag along, as she suspects a more interesting story could be involved.

At the desk, an orderly named Hector sends April and Kenya to the room of a Mr. Goldfarb, in for a gallbladder removal, who is upset that his dentures were stolen. Kenya tells April that a lot of weird things have been jacked, such as eyeglasses and a toupee; stuff no sane person would want to steal. As they leave, Kenya slips on a puddle of weird pink goo. They decide to take a sample back to the crime lab for analysis. 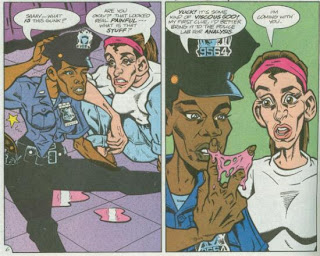 Police scientist Dr. Kamishi takes a look at the crude and tells them that it is extraordinary. It is organic, but the DNA has quadruple-helixes (which is supposed to be impossible). Even more, there are traces of rare radioactive elements in the goo. Inspired, April asks to borrow a pair of Geiger counters to help them track the goo back to its source when they return to the hospital.

Driving back, dispatch contacts Kenya to let her know that her son, Trevor, was just checked into Mercy Hospital by his grandmother. Now really worried, Kenya races back to the hospital to see what’s wrong with her boy. At the front desk, Hector reassures Kenya that Trevor only had an appendicitis and the procedure went fine. As Trevor sleeps, April and Kenya split up and begin using the Geiger counters to track the goo, finding that the thief has been traveling through the air vents. 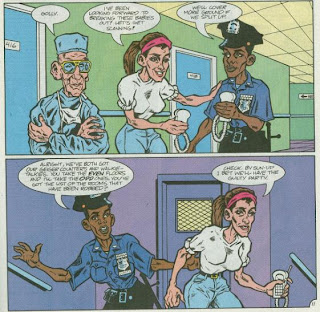 Suddenly, Hector comes running up to Kenya to tell her that her son has disappeared. In the room, they find traces of pink slime and two trails; one leading to the basement and another to the roof. Kenya heads for the roof while April investigates the basement.


In the basement, she finds Trevor comfortably playing cards with his new friend; an anthropomorphic pile of organs named Innardo. Innardo is highly intelligent and very friendly, having merely invited Trevor to keep him company. As it turns out, the hospital had been improperly storing its various medical waste (such as removed organs) and toxic waste in the basement. The waste mixed and the radioactive material caused the organs to combine and mutate into Innardo. Having vague memories of each of the people his organs previously belonged to, he found himself with a longing for certain possessions; the ones he stole.

April tells Trevor to head back up to the front desk and tell Hector that he found all the stolen items in the hospital basement. Meanwhile, April takes Innardo into the sewer, saying she knows a better place for him to stay. Traveling through forgotten tunnels, April escorts Innardo to the lonesome sanctuary of the Bookwurm. April asks if he’ll give Innardo shelter, and finding Innardo to be highly educated and literate, Bookwurm enthusiastically agrees to the company. 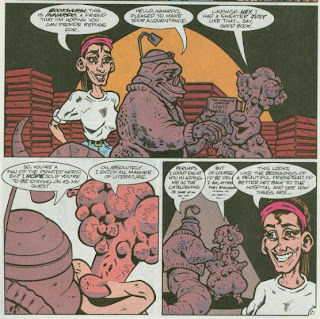 Back at the hospital, Trevor apparently told everyone that he followed a “mutant rat” into the basement, where he found all the lost items. Kenya is at ease while April asks Trevor to keep Innardo “their secret”.

At the lair, April finishes recounting her story to four very disgusted Turtles. Splinter scoffs at the idea that anybody would believe an alibi involving a “mutant rat”, igniting lots of laughter at his expense.


*Chronologically, I would place this story after April O’Neil: The May East Saga #3.

*The absence of Ninjara in the epilogue means this story has to take place before the Turtles visited Japan in TMNT Adventures #28.

*April mentions visiting Bookwurm last in April O’Neil: The May East Saga #3. As that story was retconned by "The Fifth Turtle" as just being a nightmare, then the same could potentially be said of this issue, as it references a story that “never happened”.

Bob Fingerman was pretty much the worst thing to happen to TMNT Adventures. I honestly don’t know who, if anyone, liked his artwork. And if you did, I’d be fascinated to hear why. Because, holy hell, it is the most grotesquely unpalatable style I have ever seen. It makes me nauseas just to look at it.

And I’m aware that “style” is completely subjective and everyone’s tastes differ, but Fingerman’s failings go beyond just a matter of liberal artistic decisions. His work is anatomically incompetent. Just look at April’s hand in this panel: 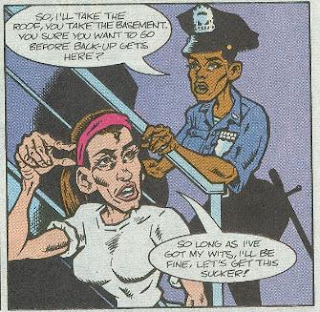 “It Takes Guts…” also suffers from having an infuriatingly boring story. Solo adventures starring April have always been cool, and I dig the idea of her having her own unique supporting cast away from the Turtles, but said stories should at least be exciting. Fingerman’s writing is as awful as his artwork, as characters recite ludicrous blocks of dialogue that are idiotically labored and insincere.  Example?

So, Kenya’s son has just disappeared from his room; a child recovering from surgery, missing somewhere in a hospital. This is a serious matter. So how does Hector, established as a friend of Kenya's, break it to the mother?

“Kenya! Two more missing items! One, an expensive gold dress watch! The other… Your son!”

Wow. So Kenya’s missing son comes in second to a gold watch and is cataloged as an “item”? Hector’s dialogue was couched this way to create some sort of dramatic impact, as the “Your son!” part was trailed off into a second panel, with a close-up of Hector and everything. But that suspense doesn’t mean jack shit if it’s written so hilariously unrealistically.

And the story just goes on and on like this; poorly drawn characters engaging in page after page of poorly scripted dialogue with scarcely any tension or action. Then Innardo shows up and the story tries to take a turn for the humorous and absurd, but it’s all halfhearted and unenthusiastic. Innardo’s origin and motivations were kind of “neat”, and he might have made a good alternate version of Mutagen Man the more I think about it, but his entire characterization is delivered through a clunky monologue. He’s then sent to live with Bookwurm and that’s the end of that.

There is honestly nothing good about this story, save for the fact that by referencing the events of The May East Saga, it qualifies itself for being discarded alongside that story thanks to a later retcon. So there’s that.

Grade: F (as in, “Fingerman’s art is legitimately gross. It actually makes you say ‘ew’ when you see it”.)