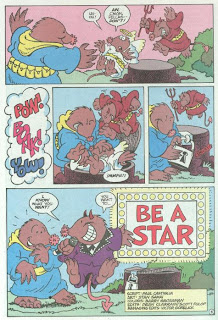 Down in the lair, the Turtles are going over a photo album Don put together. When they get to the picture of Headrush, they begin to wonder how their little magical mole buddy is doing now that he’s back in his other dimensional world of Glum.


The answer is bored. Headrush is really, really bored. Suddenly, the old devil and angel caricatures appear on his shoulders. The devil tempts him to cheat the locals out of their money and property, while the angel tries to dissuade him. Headrush makes his choice and, with the help of the devil, locks the angel up in a hollow tree stump. 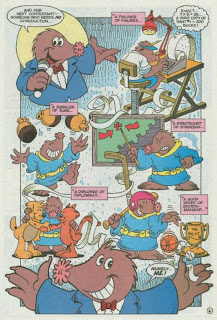 Back at the lair, Don finishes installing his suped up satellite dish that gets ALL the channels… even ones from other dimensions! By accident, they tune into “You Bet I’m Right”, the newest game show in Glum… with Headrush as host. Headrush introduces the barbarian audience to his three contestants: Broom the Janitor (who sweeps all his trash into an elephant’s house, making the lady pachyderm very angry), Salon the Barber-ian (who sits around the shop loafing all day because barbarians never cut their hair) and… himself! 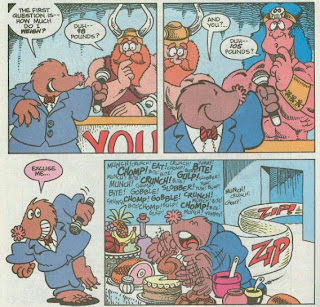 As host, Headrush then begins asking the dimwitted barbarians a series of questions, such as how much he weighs and what color his hair is. Then, as contestant, Headrush answers them all correctly. Having won the game, Headrush first mocks the barbarians for being so stupid they couldn’t tell the game was rigged, then he begins demanding they pay up. The barbarians aren’t having it and the ones from the audience as well as the contestants swarm him from all sides, beating Headrush to a pulp.

Watching the whole thing unfold on TV, the Turtles and Splinter realize they must rush to Headrush’s rescue. Luckily, Cudley the Cowlick is ready and waiting on the river bank and the Turtles catch an interdimensional ride to Glum. Arriving just in time, the Turtles make short work of the rowdy barbarians and save Headrush. The Turtles scold Headrush for trying to cheat people, but Headrush insists that the devil made him do it. Splinter backs his claim, having tied up the tiny devil and freed the angel. Regardless of his influence, the angel and Splinter insist, Headrush should never have given into peer pressure and should have elected to do the right thing on his own. 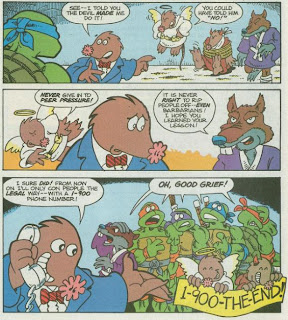 Headrush apologizes and promises that from now on, he’ll only ever cheat people out of money the honest way… with a 1-900 number!

*A photo of Usagi Yojimbo can be seen just below Headrush in the TMNT’s photo album. An Usagi stuffed doll can also be seen on the couch on page 11.

Castiglia’s script for this second Headrush story in TMNT Adventures Special #9 easily outshines his initial effort, being far more fun and memorable. We actually get a better idea of Headrush’s personality as more of a con artist than an obnoxious prankster and I greatly prefer that take. The skewed moral compass also makes the knowledge that Cudley the Cowlick keeps him in line with blackmail a little easier to swallow (as Cudley is usually a nice guy and we’d need a good reason for him to hold a being in servitude like that). The ending lesson is ham-fisted as Hell, but at least the moral is kept mostly to the last few panels and everything preceding it is more preoccupied with being entertaining than educational.

The real attraction, though, is Stan Sakai’s fantastic cartooning. His lively, action-packed and often cute style just elevates this whole story beyond what it has any right to be. Sakai has such a great command of humor and charm that even jokes that sound dull on paper (a montage of Headrush complimenting himself) will capture your attention and make you smile.

What was fun for me was seeing Sakai let loose and draw places and props that weren’t themed around Feudal Japan. I’ve only ever read his Usagi Yojimbo stuff (and the occasional TMNT crossover), so I’ve never gotten to see how he handles other settings and sight gags. It was great seeing him draw everything from TV studios to barbarians to adding machines.

“Be a Star” is a decent story gifted with a great artist. It’s definitely worth snagging this TMNT Adventures Special for, especially if you’re already a fan of Sakai’s work.

Grade: B+ (as in, “But I’m a little disappointed that they got Jeff Smith to do the cover of this Special but not any of the stories”.)