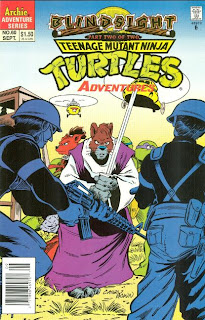 Outside a military base in the mountains, an old janitor keeps a vigil on some vaulted doors. Meanwhile, back at their offices, Kid Terra and his eco group are still on the lookout for any signs of Raph, Ninjara, Splinter and the rest. One of the eco members, Frances, finds a military transmission from the USCGS Dator (the ship that held Mike) and believes it may be a clue, though the code will take some time to crack. In the meantime, Leo goes over the story of how Raph, Ninjara, Splinter, Slash and Future-Don and Future-Raph left to battle Maligna on her Hive World to save Candy Fine from Null. 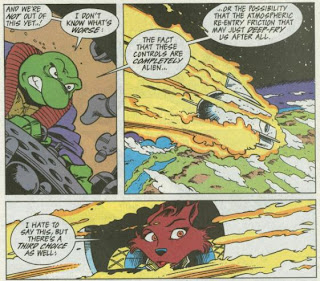 Flashing back, Slash holds off Maligna and her Malignoids as the Hive World plummets into the sun. He implores his friends to escape while they still can, and sadly, they leave him behind to his death. Future-Don has trouble piloting the alien escape craft and it begins to come apart reentering Earth’s atmosphere. They survive reentry, but are quickly flanked by jets from the US Air Force. Unable to escape, Future-Don lands the craft at a military base in the mountains. As the Turtles and their friends are being taken prisoner, the old janitor looks on (though the General tells him he didn’t see a thing). Once the Turtles are locked up behind the vaulted door and the janitor clocks out for the day, he immediately phones Kid Terra and the other members of the eco group with the good news. At the same time, Frances finishes decoding the transmission and learns that the base they’ve been taken to is Area 51 in Nevada, otherwise known as “Dreamland”. 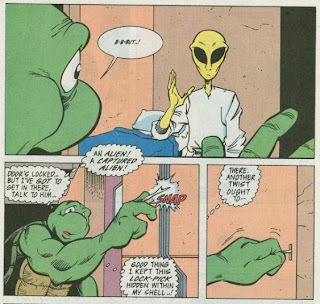 At Area 51, the General and Dr. Dick are gently questioning Future-Don when young Raph escapes his guard and makes a scene. Future-Don uses the opportunity to slip away and scope out the facility. He finds a yellow-skinned alien imprisoned in a cell and, using a lock-pick hidden in his shell, opens the door. Before he can get the alien out, though, guards subdue Raph and escort Future-Don back to his cell (though unaware that the alien’s cell is now open). As the alien makes his way into the hall, he bumps into the old janitor, who kindly greets his old friend.

Back at their holding cell, the General scolds Raph (who now has a black eye) and Future-Don for their behavior and insists on cooperation. He suddenly finds himself mentally stupefied as the alien psychically takes hold of him. Along with the alien, the Turtles and their friends make an attempted jailbreak. Shortly into their breakout, they’re cornered by guards, but the old janitor intervenes. Having absconded with their weapons from the evidence room, he returns them to the Turtles, who succeed in beating down the guards and making it outside. Unfortunately, the General, Dr. Dick and a whole troop of soldiers await them and order them to surrender. 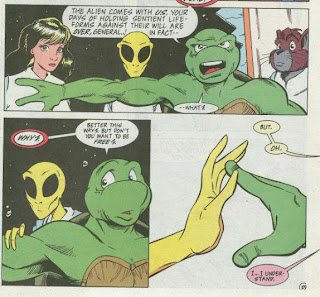 Right at the nick of time, though, Kid Terra, the Turtles, April, Oyuki and the eco group (calling themselves “Justice”) appear armed and in force, taking the high ground. Kid Terra orders the General to stand down and let his friends go. The General offers to compromise: Kid’s friends for the military’s pet alien. Future-Don refuses to let the General imprison an innocent sentient being, but the alien telepathically communicates with him, telling him that it is the only way they can escape. Future-Don bids farewell to the alien and escapes with Kid Terra, though he vows to someday return and save his friend.


*Raph, Splinter, Ninjara, Slash, Candy and the Future Turtles defeated Maligna, but haven’t been seen since, in TMNT Adventures #57.

*The Area 51 alien appears to be of the same race as the Sons of Silence, who last appeared in TMNT Adventures #50.

“Blind Sight” might not have been the most suitable title for this story, as Mike being blind has little to do with anything (though I suspect it was more a case of Murphy trying to be clever and illustrating to the reader how all us rubes are “blind” to the “sight” of the Government’s evils). This second half kind of falls apart on any sort of logical level, as the US Government just gives up valuable mutant specimens to a handful of hippies because, I dunno, it was convenient to the story, I guess?


There are just a lot of problems with how Murphy conceives of a Government base, from the hilariously lax security measures (they have an outsourced janitorial employee that is free to roam around top secret sectors and peek in on matters of national security like he owns the place) to the Government just giving up without a fight because “meh, we didn’t really want those mutants, anyway”. I guess the military base was just understaffed at the moment?

The entire thing is rather reminiscent of the second story arc of Mirage’s TMNT (Vol. 2), where the Turtles storm a military base to rescue their brother and befriend incarcerated aliens along the way. It plays out totally differently in that book, but the basic set-up is the same. Mirage, however, at least had the sense to make the infiltration and escape a challenge to the protagonists (one they wouldn’t have triumphed over had a Triceraton spacecraft not crashed into the base at the last minute to save them). Here, the military is just unenthused and halfhearted about everything.

I suppose there are some underlying explanations the reader is encouraged to string together on their own. Dr. Dick had a change of heart about the Turtles in the previous issue, and you’ll notice not only is he silent and rather stoic in this story, but that the treatment of Future-Don is much kinder than how Mike was handled. Additionally, the Turtles had just recently revealed themselves to the general public on television, so perhaps the Government thought it unwise to keep such celebrities prisoner while the media is going nuts about them. That second excuse is about 99% me pulling words out of my ass, though.

While a (mostly) well-drawn story on Allan’s part, the script relies way too much on the incompetence of the antagonists in order for the heroes to come out on top. It’s just very lazily written and at times redundant; how does the transmission Frances decoded even matter after the janitor informed Kid of where the Turtles were being held captive? And, I mean, c’mon. Couldn’t they have let Candy pick the lock to the alien’s cell since she had previously been established in multiple stories as having lock-picking skills? It would have at least given her something to contribute to this issue, as she otherwise does absolutely nothing throughout the whole thing.

Grade: D (as in, “Don’t have a clue how the action layout in this page was supposed to work. Sorry, Allan…”) 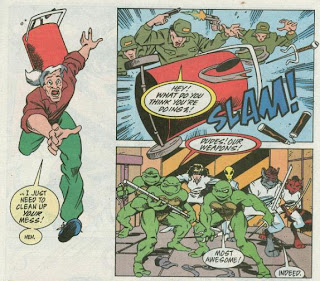