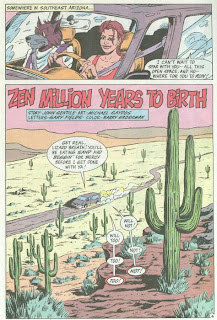 Down in the sewer, Splinter is attempting to teach the Turtles a lesson about zen; the art of becoming one with your surroundings, forgetting yourself and learning to act without thought. Unfortunately, he attempts this lesson through archery and the cramped surroundings make that a task in and of itself. Splinter realizes that a field trip is in order, preferably to a wide open space. And it doesn’t get more wide open than Southeast Arizona.

Out in the middle of the desert, April has gladly driven the Turtles and Splinter to their training destination (and brought plenty of bottles of water to survive the trip). Enjoying the scenery, April spots a man digging up a cactus and immediately stops the van. The man is named Cid and he’s a cactus-rustler; poachers who steal protected species of cactus like the saguaro to sell to landscapers for a fortune. Cid drops to his knees and begs them not to turn him in, and Splinter agrees to show him mercy so long as he returns all his stolen cacti to the desert. As Cid gets busy replanting the prickly things, Splinter starts the Turtles on their zen lesson. 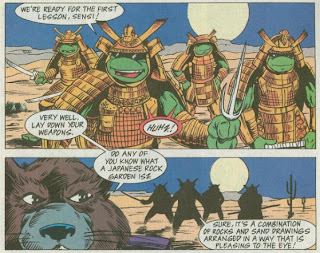 The Turtles don heavy sets of samurai armor as Splinter explains what a Japanese rock garden is. He tells them to begin creating patterns in the sand, decorated with rocks and to keep doing so until he tells them to stop. As he leaves, April asks what the point of rock gardening is. Splinter hopes that by forcing them to focus on their gardening, they will lose track of all thought and become one with their objective.

Many hours and rock gardens later, the Turtles haven’t learned squat. Cid, meanwhile, has taken to goofing off with the samurai armor on. Finishing up his last garden, Raph finds the remnants of an old town called Birth that appears to have been destroyed in a fire. He then excavates a spaceship because why not? The Turtles and Cid enter the ship and find several crystals laying around. A voice speaks to them through telepathy, claiming that if they reattach the power crystal that was dislodged in the crash, they will learn all the secrets of the Grog. Don suspects it may be a trick, but Cid greedily succumbs to the lure of infinite knowledge. Plugging in the power crystal, the Grog alien mind possesses Cid, turning him into a crystal samurai. Grog-Cid boasts that in fifteen minutes, the ship will repair itself and then go about possessing the minds of all the people of Earth. Grog-Cid is then flanked by a pair of cactus creatures, the physical forms of the Grog, and they chase the Turtles outside. 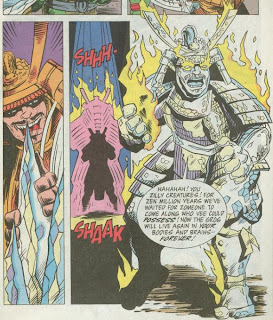 The Turtles try to fight the Grog, but their telepathic powers allow them to counter their moves before they make them. Splinter shows up and handily takes down several Grog, explaining that using zen techniques, his mind and body become one, eliminating all thought. At last understanding the value of zen, the Turtles employ what they’ve learned to battle the Grog. Don chases one of the Grog named Kak-Ti into the ship, but not before the villain procures a dehydration gun capable of sapping all water from its victims and transferring it to him. Unfortunately, because Kak-Ti only has one eye, his depth perception stinks and he ends up shooting his own soldiers. Don flees outside as the ship tries to fly before its repair sequence is finished. The Turtles use their shells to smack Grog-Cid around and shatter his crystal exterior. One look at the cactus-monsters, though, sends Cid running away in horror. The Turtles take out the last of the Grog out in the desert as the ship, unable to properly fly, crashes back down to earth and reburies itself.

The adventure over, the Turtles decide to get back to their zen training, figuring they’ve just about got it down.

Michael Gaydos really didn’t get enough work on TMNT Adventures. While his style was a little rough at first (“The Darkest Hour”), he improved rapidly and became one of my favorite infrequent contributors (the Merdude miniseries being my favorite of his work). Unfortunately, what with TMNT Adventures having a regular artist that almost always made his deadlines (and Jim Lawson seemingly locked-in as the fill-in artist), that pretty much meant Gaydos could only offer his talents to the occasional TMNT Adventures Special segment or miniseries.

“Zen Million Years to Birth” is the longest story in TMNT Adventures Special #10 and easily the best-looking. Unfortunately, it has a somewhat sloppy script that definitely would have benefitted from some tighter editing. For instance, no explanation is given as to why Cid is hanging with the Turtles after April lectures him (I assume it’s to replant the cacti he rustled, but it’s never stated or shown). He’s just… still there. Hours later. And why the heck does the Grog ship crash? I figured it was because it tried to take off too early, but no explanation is given. Most of the issue consists of comical battles with the aliens to the detriment of the story’s overall coherency.

And speaking of the “funny” fighting, it’s pretty much the sort of thing you’d have seen in the Fred Wolf cartoon because the Turtles weren’t allowed to punch anybody. Like, you know, when they’d drop a trashcan over some guy’s head and say something to the effect of, “You’ve been CANNED!” That sort of thing. It’s pretty loathsome in this story, though I did get a laugh out of Kak-Ti shooting his own troops because he has no depth perception. Unfortunately, the whole comedy battle just goes on way too long. And why the heck didn’t April do anything? She just vanishes from the story until the fight’s nearly over with no explanation for her absence. Again, it really could have used some better editing.