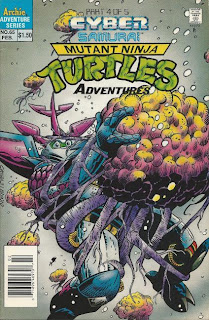 Inside a strange pool, Leo (in his Cyber Samurai armor) is being swarmed by dozens of human brains, clasping onto him with their stems. Leo ponders how he ended up in this crazy predicament…

Leaving the Turtleco building in their Cyber Samurai armor, Raph manages to find Mike floating in the water below. Apparently, Crainiac and Verminator-X are still on-world, merely hiding out in the flooded streets.

Speaking of them, in his underwater base, Crainiac inspects Hitler’s brain and is shocked to find it still functional. He then asks Verminator as to the status of “the project”. Verminator says he’s finished installing the stolen NASA parts, though he wished he could have gotten more. Crainiac reminds Verminator about the deadly comet heading Earth’s way and that every second counts. 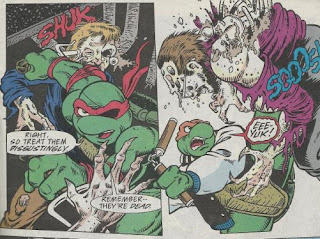 At the Turtleco building, the Turtles, Mezcaal and Leo’s students gear up and split into teams. Leo and Don (in their armor) infiltrate the underwater base from below, while Raph, Mikey and the rest go in from above. Sneaking in, Raph’s team stumbles onto one of Verminator’s Thanotics labs: a lab full of corpses hooked up to strange machines. Raph trips over a device and suddenly all the corpses spring to life. As the corpses attack, Leo’s students fight back and begin tearing the zombies apart, though the numbers against them are great. Eventually, the corpses overcome the heroes. 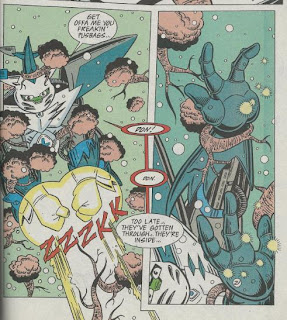 Undersea, Leo and Don find an unguarded entrance. Knowing it to be a trap, but having no other means in, they go through. The Turtles find themselves in a strange pool full of human brains (which takes us back to where we started). The brains begin attacking and there are too many for the Turtles to fend off. Eventually, they start slithering inside their Cyber Samurai armor.

Watching from security monitors, Crainiac and Verminator laugh at their success. 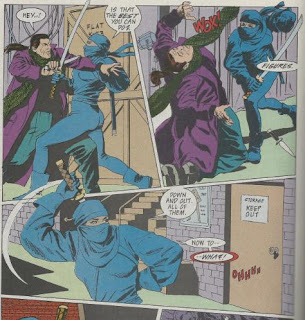 April then moves to the storage room where the Angel is being kept chained to a bed. The angel awakens and tells April that she knew she would be coming. April is shocked at how truly angelic the captive appears up close, but is even more shocked that the angel knows her name.

*This issue also contained a bonus story, “The Angel of Times Square, Chapter IV” by Clarrain and Morrow.

The penultimate chapter! Things just get weirder and weirder, as Murphy (Clarrain) basically does his best to rip off that cheesy old B-movie, “Fiend Without a Face” (it’s available as part of the Criterion Collection, I swear to God).

The zombie army is surprisingly gruesome, though they still obey Archie’s coloring laws (all blood is painted anything other than red; in this case, brown or green). Despite that, for the first time in all of TMNT Adventures you actually get to see Raph bury the pointy end of his sai through the temple of a human head (loosening an eyeball in the process). And you might take entertainment from some of the other risqué moments, such as Leo muttering “Hay-Zeus” phonetically when first encountering the brains.

The issue’s a bit light on content, as the dramatic cliffhanger from the previous issue is resolved almost offhandedly (oh, hey, Mikey’s just floating in the water; cool). And Leo’s students are all boring as Hell. Nobuko is April’s granddaughter, Miles is Raph’s “nephew”, Bob is a mutant baboon and Carmen is, uh… female. I just don’t see the point of including them in this story at all when they have such shallow characterization and offer so little to the plot. Nova Posse was better than this (though not by much).

While this installment doesn’t amount to much more than a whole lot of weird action, it’s at least a lot of fun to look at. Allan offers some really lavish pages, with the art spilling all the way to the edges (he’s often forced to place the bubble with the page number in weird positions because the cool stuff goes all the way to the corners). There’s some groaners, sure (like the splash page where everyone strikes a pose and says a stupid catchphrase), but overall this issue is balls to the wall with the art. And I love Verminator’s expression on page 20 as he watches his enemies get swarmed by brains/zombies.

The April back-up is still going at a snail’s pace. Contrary to what I said a moment ago about Archie’s blood-coloring policy, April draws a bit of crimson with her sword as she cuts one of the thugs (though not enough to kill him, which may have had something to do with letting the red color slide). The only thing in this installment that made me take notice was the “triple-X movie” joke. Another first for TMNT Adventures, ladies and gentlemen.

Grade: B (as in, “But Mezcaal’s dreadlocks look like cigar butts to me”.)