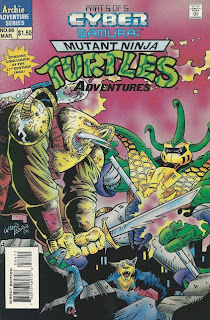 Down in the lab, the zombies are begging for death while attacking Raph and his team. Uncollapsing Don’s hi-tech bo staff, Raph decides to fry the cadavers with electricity. This only makes things worse, as now they’re killer zombies that are on fire.

In the brain tank, Leo is about to black out when Don saves the day with a pulsar blast from his gauntlet. He tells Leo that he could have just cranked up the thermowaves in his Cyber Samurai armor to fry the brains around him, but Leo says he hasn’t read the owner’s manual.

Back in the lab, Raph resorts to plan B. He uses the staff to draw out all the electric energy coursing through the cadavers, as that’s what’s keeping them “alive”. Raph succeeds in shutting down the corpses, but the staff cannot hold all that energy and fires it out in a huge blast. The blast smashes a nearby wall, emptying the brain tank. Don and Leo step out of the goo and rejoin the team. 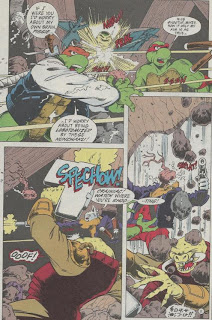 From another room, Verminator and Crainiac step in and get the drop on the heroes, holding them hostage with their guns. Crainiac wants the brains of the Turtles, as they’re sure to fetch a good price. Raph and Mikey think fast and knock the guns out of the villains’ hands by throwing a nunchaku and a brain. Raph and Verminator tussle a bit, with Verminator regaining his gun. Crainiac draws his sword and is about to cut the brain out of Mikey when Verminator turns his gun on Crainiac. Apparently, a part of their deal involved Crainiac promising to only harvest already-dead brains. Enraged at Verminator’s betrayal, Crainiac abandons him to die on Earth when the asteroid collides and flies off laughing in his ship.

While Verminator is distracted, Raph grabs one of the fallen guns and holds it to Verminator. Raph tells Verminator to drop his weapon or he’ll kill him on the spot. Verminator calls Raph’s bluff, knowing that the Turtle would never kill an enemy. Raph shoots Verminator at point blank range in the head. The other Turtles are appalled, but Raph insists it was the only way; that killing Verminator was needed to save future lives. At any rate, it won’t matter for long, as the approaching asteroid will soon destroy the Earth. 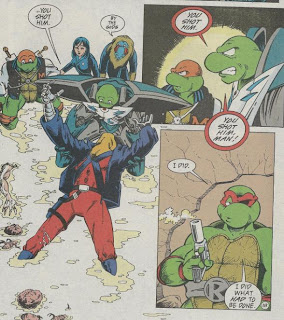 A short time later, a space ship piloted by Don targets the asteroid. A well-placed nuclear missile fired by his copilot destroys the asteroid and saves the Earth. Don’s copilot is revealed to be Verminator (now going by his original name: Manx). Apparently, Don repaired his cerebral cybernetics, removing certain “bad parts”, and not only succeeded in saving Manx’s life, but returning him to his younger, gentler personality. The day saved, the friends fly back to Earth.

In the theater, April cuts the angel free and she reveals herself to be named Gabrielle. April asks Gabrielle if she’s a true angel and Gabrielle says yes. April wonders why an angel would allow herself to be captured by a man and, reading her mind, Gabrielle answers. Gabrielle says that everything she has done has been for man and escorts April outside to Times Square.

As the ball drops to usher in the New Year, Gabrielle says that man thinks only of tomorrow and never of today. Thus, they never see the beauty that surrounds them. Departing on those words, Gabrielle takes wing and disappears as the clock strikes midnight. 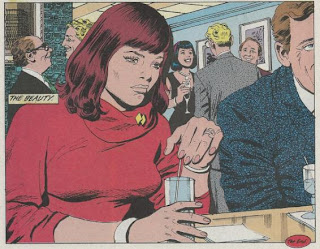 Going home, April considers Gabrielle’s words and notices that in her haste to get a story, she missed out on seeing her roommate, Oyuki, on New Years. April heads straight to a bar and continues pondering what Gabrielle meant by the beauty of man and the present they ignore.

*This story is continued from TMNT Adventures #65.

*The future-Turtles were set to make their next appearance in TMNT Adventures #71, as part of the “Forever War” storyline. However, editorial and creative differences caused the shelving of that arc. For more, read my research essay, “Whatever Happened to The Forever War?”.

*This issue also contained a bonus story, “The Angel of Times Square, Chapter V” by Clarrain and Morrow.

If you ever read any of Steve Murphy’s (Dean Clarrain’s) old insider posts from his now-defunct blog, “The Fifth Turtle”, then you might have an idea what his last few months working for Archie Comics were like. Apparently, Gorelick and Goldwater were not happy about the direction he was taking TMNT Adventures, thinking the material too dark and violent and challenging for what was supposed to be a children’s comic. Ultimately, Murphy would only get to write one more storyline after “Dreamland” before getting canned by the editors.

I’ll never agree with what Gorelick and Goldwater did, as I think kids deserve much more credit than the people in charge of their entertainment tend to give them, but a part of me can see why they were so terrified of what TMNT Adventures was becoming. In a way, “Dreamland” almost does cross the line with its material, though not in the content of said material but in its execution.

A story where the Turtles go back in time and face Adolf Hitler could have been very educational and handed down some heavy morality lessons to the young audience. Instead, the idea is rather slapdash in its manner, having little considerable effect on the overall story and amounting to nothing more than a violent and controversial diversion. In essence, it feels extremely “gratuitous” and that’s what really bothers me about it. Murphy had some strong and risqué ideas percolating in his imagination, but the half-baked transfer to the page wound-up making those ideas look like they were included strictly for the shock value. And from that angle, I can see how editors would find the material so objectionable.

If you’re going to write a story about the Turtles traveling to Nazi Germany and fighting Hitler, don’t make it a brief side story.

And the poor execution shows through in this final chapter, too, particularly the implementation of the asteroid conflict. It really, really shouldn’t have been in this story arc. It didn’t matter whatsoever.

The asteroid is constantly looming overhead as a problem from the start of “Dreamland”, but the Turtles don’t know about it until the last second and the villains only mention it offhandedly from time to time; there’s little suspense in it. Then Don and Verminator destroy it with nearly humorous ease over the span of three pages; the resolution is as sloppy as it gets.

Likewise is Verminator’s return as Manx at the very end, completely undercutting the shocking power of Raph pulling the trigger and making the tough decision to end Verminator’s life. Everything about that moment is tossed aside for this sappy ending that feels woefully tacked on. And there’s a certain moral objection to Don “reprogramming” Verminator into a good guy; removing his free will and manipulating him into being the person Don wants him to be. While certainly an interesting ethical concept, there’s no dwelling on it in that high speed epilogue. You’re just supposed to take Don lobotomizing Verminator as a good thing.

Even Raph’s termination of Verminator has its problems. When betraying Crainiac, Verminator displays a sense of honor heretofore unseen in the character. It conflicts with his personality as shown up to this point; so he doesn’t want to kill anyone while working his schemes, but has no compunctions about leaving everyone on Earth to die in an asteroid collision? And what about the dock guards that his cadaver soldiers killed a couple issues back? Verminator tries to pull this honorable about-face on killing, but it just doesn’t gel with his characterization. And anyway, to have him make this declaration that he won’t let anyone be killed to meet his goals clashes with Raph’s rationalization for shooting him in the head; Raph insists that if he hadn’t, Verminator would have taken countless lives in the future.

It just doesn’t hold together. And when the moral or emotional backbone gets pulled out of the scene, all you’re left with is Raph cold-bloodedly shooting an enemy in the head because it’s “totally badass, man”. And, again, that’s just gratuitous violence and not only inappropriate for a kid’s comic, but completely beneath the quality we’d been seeing up to this point.

I wish I didn’t have to be so harsh on “Dreamland”, as it’s packed with good ideas; I love the central conflict of a brain thief out to steal dreams for aliens, and I dig seeing how the future has turned out for the main cast in greater detail. But the execution of those elements is half-assed, to be frank, and I somewhat find myself siding with the editors. Not because I don’t think these ideas belong in a book like TMNT Adventures, but because I think they were squandered to the point of easily being misinterpreted as gratuitous violence and recklessly controversial material.

As for the April back-up, we all waited five months for a pretty damn trite lesson, didn’t we? “Slow down and appreciate the beauty of the world around you”. Got it. Thanks. Hippy.

The presence of Christian angels in TMNT Adventures shouldn’t come as a shock to anyone. Thus far we’ve encountered numerous religious and mythological entities from numerous creeds, including Shinotism, Buddhism and Islam. And so far as Christianity is concerned, we’ve already met the Four Horseman of the Apocalypse and even Null, a demon straight from Hell. April is shocked at meeting an angel and says she never believed in such things, displaying an overall atheist attitude. I just find that sort of disposition hard to swallow, considering all the religious entities I just mentioned, many of which April has encountered for herself and now knows to exist.

It’s sort of like how I find it hard to believe atheists can exist in the Marvel or DC universes, when gods of all faiths run around New York City and their existence is very matter of fact.

Anyway, the ending seemed unreasonably depressing, to me. Gabrielle tells April to enjoy the beauty of the present so she heads out to wallow in a bar all by herself. Jesus, lady. It’s not like the angel was being very subtle. Sheesh.