About a week ago, I received an e-mail from writer Jeremiah D. Allan with a pretty cool gift inside.  Apparently, before the Viacom buy-out of the Teenage Mutant Ninja Turtles franchise from Peter Laird, Jeremiah wrote a 10-page comic introducing the villainous, palm tree-obsessed Slash to the Volume 4 era of the Mirage TMNT series.  The story was drawn by Randy Valiente and lettered by Kris Johnson.

Jeremiah had this to say about the creation of the story:


"Not much history behind the comic. I was born in '83 and have thus developed a lifelong love for the Turtles. Slash has always been a favorite, with his bad ass toy and adventures in "Adventures," which I bought off the rack at a local drugstore from #23 until the end of the series. Several years ago, Go Green Machine was putting together a fan tribute book that I wanted to be a part of so I wrote a script introducing Slash to the Vol. 4 continuity and commissioned a friend to draw it. The tribute book was canceled during the Nickelodeon buyout so I've just been sitting on this story in the meanwhile."


With Slash's recent comeback via the IDW TMNT comic, now seems like a better time than ever to become reacquainted with The Evil Turtle from Dimension X (who isn't always from Dimension X).  So, without further ado, here is the comic as sent to me by Jeremiah: 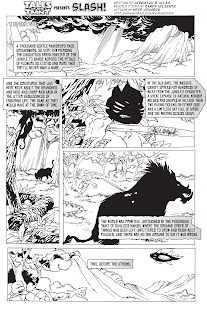 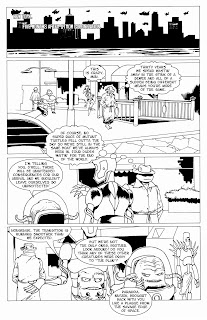 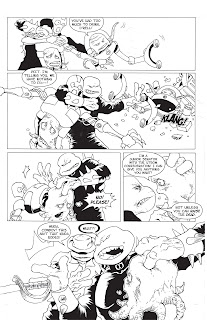 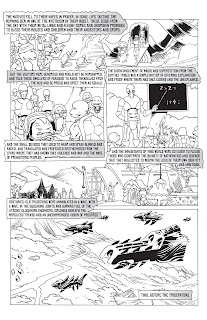 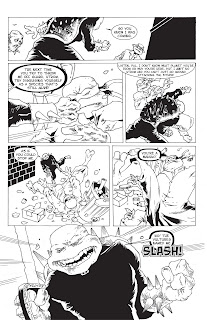 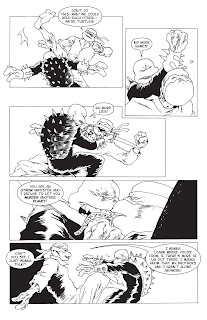 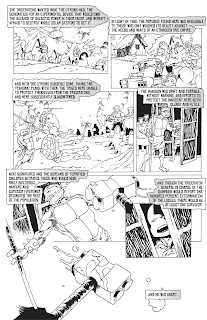 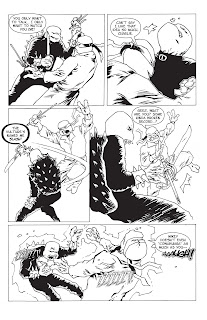 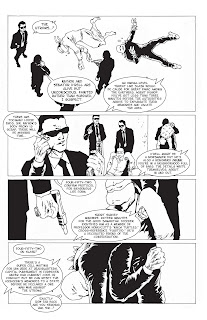 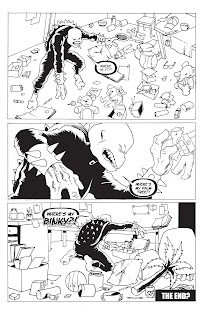 Definitely a cool little story with a rebooted origin that sticks very close to Slash's Archie Comic roots (while IDW's reboot is playing a little closer to his Fred Wolf origin).  I think Jeremiah struck a steady balance in terms of tone between Slash's admittedly sillier Archie back story and the grittier, more political atmosphere of Mirage's Volume 4.  I particularly liked how he worked in both Slash's palm tree obsession and his reduced intelligence into the story.

Perhaps my favorite element to the tale, though, was the way the script was paced, with regular interludes to the history of Slash's people, punctuating the present-set action.  It was a much more enthralling way of communicating the back story than just doing a linear past-to-present tale.  The inclusion of Agent Bishop from the 4Kids series may have felt like one dollop of "fanwank" too much, but author Tristan Jones had already slipped in a cameo/reference to the character during Tales of the TMNT (Vol. 2) #61, so there's already a precedent for you continuity hounds (you know who you are!).

Valiente's art has a good sense of layout to it and I thought he really excelled on the past-set pages of Slash's homeworld.  The present-set pages do suffer a bit from "empty space" in regards to the background, but the focus is supposed to be on Raph and Slash tussling, so that's hardly a grievance.  The lack of shading/toning perhaps added a bit to the "empty space" effect and some sort of shading might have made moments like page 9, panel 1 a bit easier to read (without anything designating the ground, Raph and Slash kind of look like they're floating in mid air).  Johnson's lettering flows fluidly and unobtrussively.  I particularly liked the parchment effect used for the narration of the past-set pages.

Overall, this was a lot of fun to discover and I'm grateful to Jeremiah for sharing it with me.  I suppose the Go Green Machine tribute book can join the ranks of the Mirage Universe Sourcebook and the Forever War miniseries as casualties of the Viacom buy-out.  Still, it's great to see what could have been.