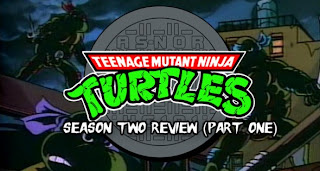 Continuing my watch-through of the old Teenage Mutant Ninja Turtles cartoon produced by Fred Wolf in 1987, I jump into the first half of Season Two.

Despite a noticeable decline in production values and a clear bit of "tidying up" to appease BS&P, there's surprisingly quite a bit to like about this season, particularly the first half which forms a pretty tight-knit story arc.

Unfortunately, there's also some crap, but that can't be helped.