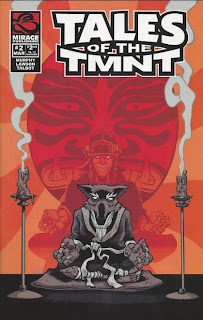 Frontispiece: Sitting beneath a torri, Leonardo ponders that Master Splinter would be very proud of him, as he has made great strides in mastering “the lesson of the bittern”. This is the ability to attain perfect calm so as to commune with nature. Now, with all of nature listening, Leonardo decides to tell a story…

Fifteen minutes ago: On a rooftop in New York, a mystic in a meditating position, chews on sunflower seeds and laughs evilly to himself. Down in the lair, Raph and Donnie come home with some loot they got at a junkyard. Leo and Mike have ill-tidings, as Splinter has been trapped in a levitating, meditating position for seven hours, unable to be woken from his trance. 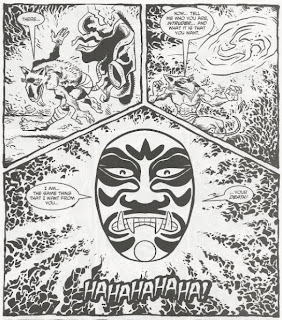 Ten hours earlier: Awoken from his sleep by a noise, Splinter investigates and finds a glowing sphere in the sewers. The sphere transforms into several rocks and attacks him. Splinter dodges, only for the rocks to become shuriken and nearly impale him. Splinter demands to know who his attacker is and the spectral form of the mystic answers that he is Splinter’s death. With the challenge issued, the mystic’s spirit departs. Splinter deduces that the mystic may be a member of the Foot Clan and that his worst fears are about to be realized.

Eight hours earlier: Pouring over many ancient tomes and scrolls, Splinter tells Mike that he and his brothers have the day off from their studies, but that they must not bother him under any circumstance.

Seven hours earlier: Leo uses the day off to practice, Mike uses the day off to read comics and Raph and Donnie use the day off to go hunting for scrap at a junkyard. Finishing up his studies, Splinter determines that he at last knows what he must in order to meet the mystic’s challenge. Taking a lotus position, Splinter performs an astral projection for the first time, detaching his spirit from his body. He follows the trail left by the mystic and confronts him on the rooftop. The mystic is shocked that the old rat could learn such an advanced technique so quickly and counters by projecting his own spirit.

The mystic sends Splinter on a chase through many metaphysical dimensions in an attempt to wear him down, eventually landing in an endless field of sunflowers. The sunflowers fire bullet-seeds at Splinter’s spirit, distracting him long enough for the mystic, now a giant clad in samurai armor, to burst from the soul and snatch Splinter in his hand. Splinter is no easy prey, however and first transforms into many small rats to escape the mystic’s grasp, then transforms into rain which cuts a hole in the ground beneath the mystic, plummeting him into darkness. Furious, the mystic grows wings and escapes the hole. 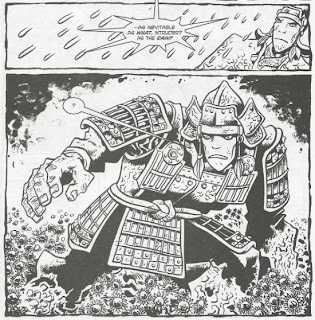 One minute ago: The Turtles gather around Splinter, wondering what they can do. In the astral plane, Splinter counters by transforming into an armored bat and begins out-fighting the mystic. The mystic recognizes Splinter’s style as that of the Foot and is confused. Splinter finally defeats him with multiple energy blasts, explaining that his will is greater than the mystics, thus ensuring his victory.

On the rooftop, the mystic’s body is curled up in a paralyzed fetal position. Three Foot Mystics (a woman, a warrior and an old man) approach their initiate (Myzoko) and declare that he has failed his final ordeal. They then kick him over the side of the roof where he falls to his death. Leaving, the female Mystic says that one day, they too must face the rat in combat. 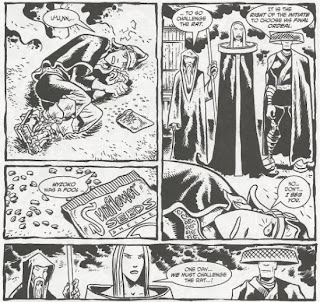 In the astral plane, the mystic’s spirit dissolves now that his body is dead. Splinter, holding no ill will, tells the mystic to go in peace as his spirit ascends to the heavens.

Splinter suddenly awakens in the lair and tells his sons that he is alright… albeit very hungry. Mike offers to make him some dinner and Splinter accepts (with the condition that the meal not contain any seeds).

*Considering that Splinter does not learn to master astral projection until this story, and the Foot are unaware of his connection to their clan until this encounter, I would place this story as prior to TMNT (Vol. 1) #9.  That one was a flashback story where Splinter is shown using the technique which also takes place before TMNT (Vol. 1) #1 (where Splinter will reveal his existence to the Foot and the Shredder).

*There is a bit of discontinuity due to this, as the Turtles look older in this issue than they did in TMNT (Vol. 1) #9 and have adopted the strip bandanas over the skullcap bandanas.

*In the letters page of Tales of the TMNT (Vol. 2) #4, Murphy says: "Issue 2's tale took place sometime in 1996. (But I no longer remember why!)"  Well, that goes against my assessment, but it completely clashes with the actual story, where Splinter has to learn astral projection and the Foot are unaware of his connection.

*The Foot Mystics from this issue will return, after a long absence, in Tales of the TMNT (Vol. 2) #11.

*This issue also featured a 2-page bonus gallery detailing the creation process of the cover of Tales of the TMNT (Vol. 2) #3.

*In the opening editorial, Murphy explains that this story was based on a submission he sent to Dreamwave, applying for the writing gig on their TMNT comic based on the 4Kids animated series. He was rejected in favor of Peter David and the script (originally titled “In the Realm of the Super-senses”) went unused until now.

You can definitely detect the lingering artifacts of this story having originally been written to take place in the 4Kids animated series. While it functions perfectly well as a flashback tale to the early years of the Mirage characters, it would have fit in just fine at the beginning of the cartoon (Murphy even says it was written to take place just after the first episode). The Foot Mystics, for example, were conceived for the 4Kids cartoon and imported to the Mirage comics after the fact (by this story, no less).

Despite not having been meant for this continuity from the outset, it fits in rather well and shows us an important development in Splinter’s mystical abilities (how he learned to astral project). It manages to dodge disrupting continuity by not having Splinter battle a true member of the Foot Clan before TMNT #1, but just a failed initiate (who dies before he can tell the rest of the Clan of Splinter’s connection).

Back in 2004, when this was first published, I recall not being too enthused with “Seeds of Destruction”. The story seemed a little light for me, consisting mostly of a chase and a game of imaginary one-ups-manship. This is the first time I’ve read it since 2004 (my god, eight years ago) and my attitude feels much less damning. It’s a good focus on Splinter and reads really well alongside stories like “A Day in the Life” and even helps make a lousy tale like “The Pantheon” read better (explaining Splinter’s rather random mastery of the mystic arts).

I think another part of my initial opinion was that back in 2004 I was a fresher initiate to the Mirage comics and hadn’t quite built up my “callus” to Jim Lawson’s contemporary art style. I’ve since gotten over that and this is certainly some of his better work in the modern era; great expressions on Myzoko’s face as Splinter batters and zaps him and Talbot’s inking creates a better sense of depth to Lawson’s pencils than you usually see.

There isn’t much else to say about “Seeds of Destruction” other than how cool the frontispiece by Laird is. I mentioned in my review of TMNT (Vol. 1) #12 that the guy can draw scenic natural splendor like nobody’s business, and he certainly hadn’t lost his talent for it by 2004. Gorgeous landscapes in that frontispiece.

Grade: B (as in, “But I'd be terrified, too, if the Phanto mask from Super Mario Bros. 2 suddenly appeared in my bedroom”.)
Posted by TMNT Entity at 6:54 PM