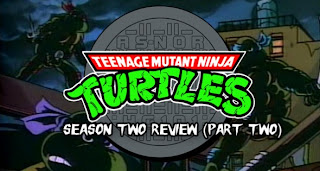 I've finished up my review of the second season of the 1987 Teenage Mutant Ninja Turtles cartoon produced by Fred Wolf, taking a shot at the last seven episodes.

While I enjoyed the first half and its tighter plotting a bit more, this second half of season 2 has some pretty fun episodes, including a few of my all-time favorites ("Enter: The Fly" being my pick as the season's best).  Of course, it also has some of the most inept in the series, like the borderline incompetent "New York's Shiniest", but even the bad ones are at least fun to watch for their rampant idiocy.

So if you wanna read about the Punk Frogs, REX-1, Baxter-Fly and the return of those god damn Neutrinos, head on over to the link above.