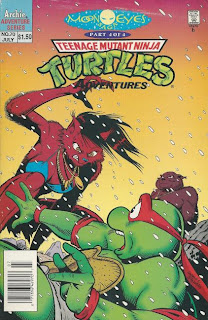 In the cave, April, Mike, Leo and Don fail to find Raph, but do find the discarded barrels of toxic waste that the US Government had hid. Raph, meanwhile, is in a different section of the cave, staring down the wolf pack. Before he can defend himself, a stalactite breaks and falls on his head, knocking him out. 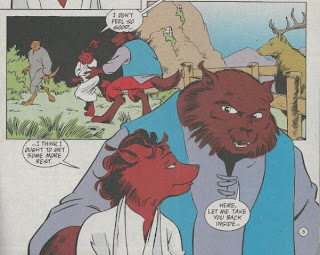 At the wolf-people village, Mokoshan shows Ninjara around their livestock pens. Mokoshan explains that the only people who know of the wolf tribe are the Native Indians, as modern man cannot understand them. He says that the wolf-people and the Indians came to Alaska over the ice bridge many centuries ago. Ninjara realizes that her fox-people and Mokoshan’s wolf-people share a common ancestry. The two become even closer as the day winds on.

April, Leo, Don and Mike find their way out a different entrance to the cave and see for themselves how the toxic waste has affected the flora; giant briar patches twist and wind every which where. Don wonders what the radiation might have done to the fauna as a large shadowy creature stalks the gang. 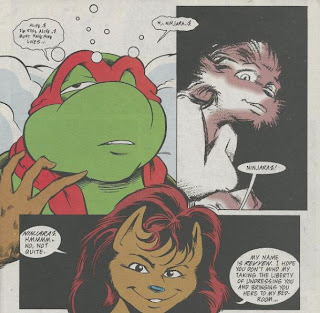 Back at the village, Raph awakens inside Revyen’s chambers. She admits to having rescued him from the cave and dressed his wound. Raph is in no mood to talk and demands to see Ninjara. Revyen points him to the window and says that Ninjara is with Mokoshan by the caribou pen. Infuriated, Raph smashes through the window and accosts Mokoshan.

At the cave, the shadowy creatures stalking the Turtles turn out to be polar bears, mutated into humongous monstrosities. The Turtles and April make a break for it as the gang of bears chase after them.

And at the village, Raph picks a fight with Mokoshan, who has no interest in violence. Raph insists, though, and starts punching him (as Ninjara begs for him to stop). From the broken window, Revyen looks on in sinister amusement. Before a victor can be determined, though, April and the Turtles come barreling through the briar patch with the polar bears hot behind them. Don tells Mokoshan to create a diversion and the wolf-man sets the caribou free from their pen. As the caribou race off over the hills, the bears chase after them and abandon the village. Still weak, and made even weaker by all the action, Ninjara faints. Mokoshan sees to her and carries her back to her room. Raph realizes he’s lost the battle for good. 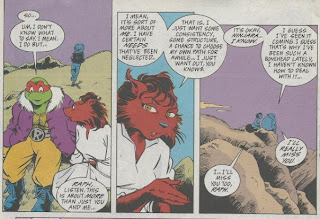 Later, April and Ninjara have another chat while sitting on a cliff-side. Ninjara admits to being smitten with Mokoshan’s charm and good looks, but also that she finds his peaceful and positive disposition preferable to Raph’s perpetual bad attitude. Raph approaches and April takes her cue to leave. Ninjara finally gives it to Raph straight: She has needs that he cannot give her and that she has to find her own path in life. Raph says he understands and they kiss each other goodbye.

As the Turtles and April leave the village, Mokoshan wishes Raph goodbye, though the Turtle says nothing. Entering the forest, Mike tries to cheer Raph up with some canned advice, such as “if you love her, set her free” and “it’s better to have loved and lost yadda yadda yadda”. Raph tells Mike to shut up.

Entering through the front door that the redneck fur-poachers left open, the wolf pack attacks. The wolves chase the rednecks out the back door and to the pen where the she-wolf is being kept. The lead redneck attempts to shoot the wolves, but Inky bites his arm and makes him drop his gun. 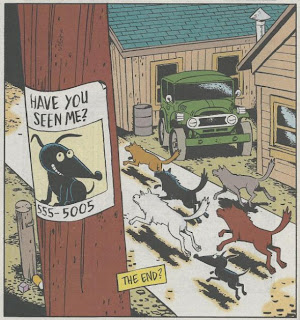 Reunited, the alpha male and the she-wolf take off back through the front door with Inky and the rest of the pack in tow. As Inky joins his new wolf friends on the run, he passes by a missing dog poster with his face on it.

*Ninjara was originally intended to return in TMNT Adventures #74.  That issue and it's storyline were never published (only a pencilled and inked cover were completed).  She won’t be seen again until the future-set storyline Furrlough #47.

*We never find out if Inky ever gets reunited with Tattoo, sadly.

*The Hype section of this issue contains an ad for “The Forever War”, supposedly beginning next issue. That storyline wound up being cancelled with Steve Murphy and Chris Allan’s departure from Archie Comics. For more on this, read my research article, “Whatever Happened to the Forever War?”

*This issue also contained a bonus Inky story by Jones, Talbot and Lawson.

The “Moon Eyes Saga” concludes and Ninjara. Is. OUTTA HEEEEERE!

Obviously, you can tell that this wasn’t meant to be the end of Ninjara. Murphy (Vollman) was clearly setting up some character arcs, particularly with Revyen and that scheming look she makes as Raph and Mokoshan fight. I got the impression that Revyen didn’t cotton to Ninjara too well and may have had her heart set on replacing Nei’Sha as Mokoshan’s mate (and thus setting herself up as “queen”). All presumption on my part, but that seems like the typical direction these things go.

As far as Mokoshan goes, the guy is just a mess of a character. When introduced, he’s a violent and threatening creature that swears death to the Turtles the moment he meets them. Next, he’s a smooth charmer that instantly puts the moves on Ninjara. After that, he’s a melancholy widower, lamenting the death of his lost love. And here, he’s now a pacifist that doesn’t look for trouble, has no interest in hurting others even when they try to provoke him and is quick to forgive and forget.

You just can’t get a bead on this guy.

The end result is that he’s incredibly sloppy; his personality does an about-face whenever it’s convenient to the plot. Need him to be a snarling villain for a thrilling cliffhanger? Sure! Need him to be an irresistible canine Casanova to woo Ninjara away from Raph? Okay! Need him to be a grieving victim to garner sympathy from the audience? Why not! Need him to be a mellow, gentle giant that refuses to fight and doesn’t make enemies? Hell, he’s been everything else!

And it isn’t like Ninjara is the last female anthropomorphic canine on the planet, either. Beyond just Revyen, the village is shown to be populated by plenty of wolf-women. So it’s not like he put the moves on her because he had no other options… The guy just instantly forgot about his dead mate (her corpse probably not even cold yet) and immediately started chasing some teenage tail. And, again, the fact that this guy is drawn to look much, MUCH older than Ninjara just makes things really gross.

Like I said, Mokoshan is just a total disaster.

What I did enjoy about this issue is Ninjara finally putting Raph in his place. I said this in my review for the very first installment of the “Moon Eyes Saga”, but Ninjara basically outgrew Raph and you can't really blame her. The way she puts it in this issue makes it clear that she’s over her “bad boy” phase, which was a take on the matter I absolutely liked. She sees Raph for the selfish, immature, volatile jerk that he really is and has the epiphany that she can do better.

Of course, she kind of overshoots in her search for a more “mature” man and winds up hooking up with a guy in his 30s or 40s. Ninjara just makes a lot of bad decisions when it comes to her love life. She ends up having Mokoshan’s kid, too.

And one more thing: Why the hell is she wearing a bikini on that cover? And please, don’t say “sex appeal”.

The subplot involving the US Government dumping toxic waste in Alaska is more environmental pap. It is entirely superfluous, along with the mutant polar bears (Hell, they could have been just regular polar bears and served the same purpose), and only included for the sake of some contrived finger-wagging. I thought at first it would be an explanation for the wolf-people, but it wound up not even having that level of impact on the story (the wolf-people are “natural mutants” like the fox-people). It’s just utterly pointless filler that turned two issues-worth of story into a tedious 4-part affair.

As for Inky… The greatest tragedy of TMNT Adventures’ untimely cancellation was his loose end. Oh Inky, did you ever make it home? I stay up at night, wondering…

Grade: D (as in, “Did Ninjara just faint again? She’s done that at least four or five times between this and last issue”.)