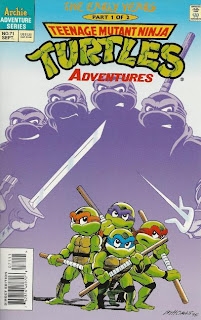 “How the Turtles got their Weapons, Part 1”


Prologue: Down in the sewers, April enjoys a leisurely stroll with Master Splinter. April is busy discussing how the Turtles lack self control (Raph throwing her TV out the window when upset, or Mikey teaming with Oyuki to raid her fridge), but she notices Splinter gaining a distant look in his eyes. Splinter apologizes and explains that the section of the tunnels they’re in reminds him of a story…

Returning with a payload of pizzas for his young, pre-teen Turtles, Splinter passes by the storm drain looking out at the Ling Martial Arts Academy. He overhears its owner, Lynda Ling, having an argument with her attorney, Kim. Slujjco wants to tear down her failing academy so it can develop the neighborhood, but she won’t sell. The academy was left to her by her late husband, the famous martial arts film star David Ling. 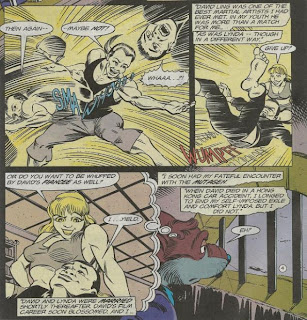 As Kim drives off and the conversation ends, Splinter recalls how he met David and Lynda shortly after he was exiled from Japan in his Hamato Yoshi days. David was a talented martial artist and a dear friend, so Splinter was crushed when he learned that he’d died in a Hollywood car accident. Splinter since yearned to comfort Lynda, but his subsequent mutation forced him to keep a distance.

Shortly after Kim drives away, a trio of masked thugs breaks in and attacks Lynda, demanding she leave the neighborhood or face the consequences. A talented martial artist herself, she mops the floor with the punks and they retreat. Splinter, still watching, leaves with the satisfaction that Lynda can take care of herself. However, he feels the urge to give her a helping hand of the invisible kind, anyway.

Back at the lair, Splinter attempts to rally his pre-teen Turtles, but all they can do is whine about the pizza being cold. Leo snaps his brothers out of their childish behavior and, grabbing their bo staffs, they all promise to help Splinter’s friend. 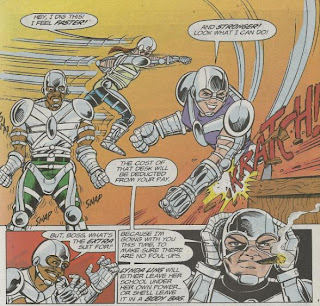 At a construction office, the three bruised punks meet with their boss (a shadowy, cigar-chomping figure). They ask if they can go back with guns, but he refuses to let them; Lynda’s death and the destruction of the academy has to look like an accident. The boss then gives the punks cybernetic exoskeletons to enhance their speed and strength. He then dons one himself, insisting he must go along to make sure the job is done right. 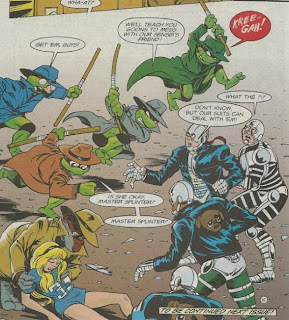 *The Pre-Teenage Mutant Ninja Turtles last had a flashback in TMNT Adventures #58.

*Slujjcorp was first introduced in “If a Tree Falls…”

*This issue also contained a reprint of “Origin of the Species”.

With all the staff shake-ups, it’s pretty clear in this issue that Archie’s TMNT Adventures title had fallen into a fatal state of turmoil. Not only did this story come out a month late, but it’s only 15-pages long. “How the Turtles got their Weapons” is really only a 1-issue story, broken in half to cover two, with reprints filling out the rest of the page space. With Murphy and Allan off the team, and the already advertised “Forever War” story arc now cancelled, TMNT Adventures was rendered confused and directionless.

So what we get is delays, an unobtrusive flashback story and a bunch of reprints to cover collective editorial asses while the powers that be get their shit together. Well, the proverbial fecal matter was never successfully rounded up and TMNT Adventures will meet its end next issue.

While “How the Turtles got their Weapons” certainly wasn’t the story readers were expecting, it’s still a decent little flashback tale. I’ve said it before, but Brian Thomas is really one of the most overlooked artistic talents in the title’s stable. As far as mixing action and cartoonish expression goes, he was pretty much the next best thing to Chris Allan. Had TMNT Adventures continued on with Thomas as the regular artist, the book would still have maintained an excellent visual standard. I particularly liked his design for Lynda; he seems to have a lot of fun with her hair.

In regards to Sullivan’s script, it’s kind of funny. Murphy was let go by Archie’s editors because they thought his scripts were too dark and too violent. While this has nothing on Hitler blowing his own brains out or zombies getting dismembered, Sullivan’s script for this story has its own edge of death, tragedy and menace that the Archie editors were supposedly trying to distance the book from.

As it happens, my favorite part of this issue is the flashback-within-a-flashback, as Splinter recalls his days in New York as Hamato Yoshi, before the Shredder mutated him. The Fred Wolf cartoon almost never dwelt on Splinter’s past as Yoshi beyond the second season and TMNT Adventures, though it offered a more detailed background, still glossed over it more often than not. So any glimpses of his human days strike me as being special, as I’ll admit to greatly preferring the “Yoshi-is-Splinter” origin over the “Yoshi’s-pet-rat-as-Splinter” origin (Mirage purity be damned).

Never the less, this is just 15 pages; a single issue cut down the middle and sold for twice the price ($1.50 an issue in 1995, sure, but I had to pay $7 bucks a piece for these on the aftermarket). And because of the bisecting, the plot point this story is titled after, the Turtles choosing their own unique weapons, is completely absent from this half of the narrative.  I think I finally understand how all you British people feel whenever you get American comics reprinted and chopped to pieces to stretch the material out over as many months as possible.

Grade: B– (as in, “But after some thought, Lynda’s design reminds me a lot of Relena Peacecraft from ‘Gundam Wing’.”)