TMNT Adventures: The Year of the Turtle #2 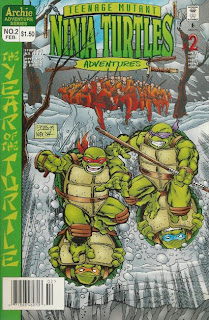 Prologue: Entering his son’s room at bedtime, Hamato Yoshi is horrified to find that all the furniture and blankets have been used to build a fort (or as Yoshi calls it, a “mess”). Yoshi tells his son that after he hears tonight’s story, he has to clean up his room…

Traveling to the Himalayas, the Turtles and Hamato Yoshi make it to the hidden temple that houses the last Green Talisman. Yoshi elects to stay behind, still getting used to his human form, and the Turtles infiltrate the temple (guarded by the Killer Monks) by themselves. Unbeknownst to them, brother and sister team T.K.O. and Psonic have already made it in using the maps Shredder stole from the Turtles’ lair. Hearing a group of Killer Monks coming down the hallway, T.K.O. uses her telekinetic powers to levitate them to the ceiling, while Psonic creates an energy keytar and plays some “null sound” to mask their noise from the guards. They then find the main entrance to the Talisman’s chamber, but T.K.O. reads the map and tells Psonic it’s booby-trapped. They then take a detour to a secret entrance. 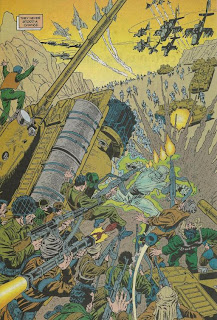 In the warring Kyrranian Desert of the Middle East, Cyberius shows Shredder a vast battleground where two enemy nations are doing battle. Cyberius tells Shredder that according to his calculations, the alignment will occur in this exact spot… though it needs to be cleared of debris. Uniting his two fragments of the Green Talisman, Shredder channels the awesome energy through his body and handily wipes out both armies.

At the temple, Don finds the main entrance to the Talisman’s chamber, but is unaware of the booby-traps. The Turtles all fall into various deadly pits, but use their wits and skill to escape death. They arrive in the chamber, but before they can secure the Talisman, T.K.O. levitates it into her clutches. Psonic then forms several energy instruments and hits the Turtles with sonic attacks, blowing a hole through the side of the temple. T.K.O. levitates herself and her brother to safety as the Killer Monks descend upon the Turtles. 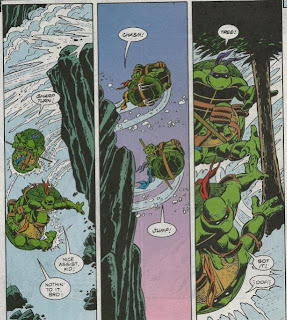 Mikey and Leo recede into their shells and Don and Raph use them as makeshift snowboards to sled down the side of the mountain. The Killer Monks give chase, at least until Psonic uses an energy guitar to cause an avalanche. The flood of snow eventually catches and buries the Turtles. T.K.O. lets her telekinetic forcefield down, thinking the Turtles dead, but Mike pops out of the snow and hits the bad guys with snowballs. T.K.O. drops the Talisman and both she and Mike race to snatch it up. They touch it at the same time and cause the confused mystical energies (only supposed to be accessed by one individual at a time) to explode.

The explosion frees the other three Turtles from the snow and they find T.K.O. and Psonic knocked out. As Don recovers the Talisman, Leo makes a horrible discovery. Just as the mystical energy had reverted Splinter’s mutation, returning him to his human form, the energies reverted Mikey’s mutation… turning him back into a baby turtle. 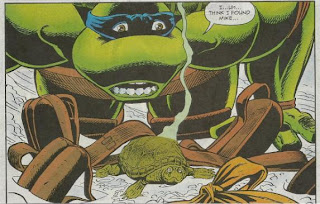 Epilogue: Yoshi declares that his son has heard enough story for one night; he’ll hear the conclusion tomorrow. Leaving, he tells his son he won’t hear it, however, until he has cleaned up his room.

*This issue was originally published with 2 bonus pin-ups by Frankie Teran and Pitoick & Hanson.

Like a lot of three-part stories, the middle section is the weakest. Not that part two of The Year of the Turtle is a bad adventure, it’s just more forgettable than the opening and concluding chapters.

I think its primary flaw is how terrible Shredder’s reject super villain henchmen are. While they’re certainly a welcomed break from idiot mutants and mindless robots… They still suck. Honestly, there can’t possibly be a superpower more embarrassing than the ability to create a keytar out of thin air.

This issue’s successes hinge more on Haynes’ kickass art than anything else, as he renders the action sequences in Slott’s script with incredible flare. All the set pieces look amazing, from the glorious two-page splash introducing the hidden temple to the goofy snowboard/shell chase down the mountain (which probably would have qualified as “awful” had anybody else drawn it).

My absolute favorite moment in the issue, though, is when Shredder storms the desert battlefield and just starts WRECKING tanks and infantry with his bare hands like it was child’s play. Haynes’ pencils just come to life in that amazing splash page, as hundreds of soldiers scramble in vain to stop him, as jets and helicopters levy missiles at him and tanks fire rounds of ammunition to no effect. For a villain who was more often than not an ineffectual joke in this comic, Haynes’ splash page of the Shredder effortlessly annihilating an entire army practically redeems him in a single stroke.

The cliffhanger, though, is a solid hook. Slott does a great job of foreshadowing it with Yoshi’s ominous narration at the start of the issue, and while the slapstick race down the mountain was a bit groan-worthy, the pay-off wasn’t. If anything, The Year of the Turtle is a miniseries that keeps you on your edge and coming back for more, even when it hits its own relative low.