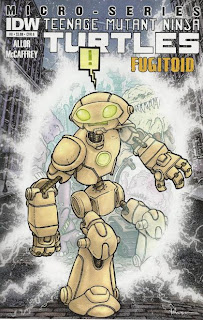 Two years ago. After being “conscripted” from his homeworld of Neutrino by General Krang, Professor Honeycutt was put to work building the Simulated Anthropomorphic Lifeform (or SAL). Thanks to Honeycutt’s brilliance, SAL can withstand intense temperatures and even shape-shift for short periods of time. However, the android still requires a user’s consciousness to be uploaded into it in order to function. Honeycutt believes SAL can be used for the benefit of everyone, but Krang only wants to use it as a weapon of war for his “Technodrome”. 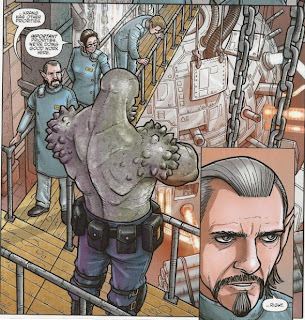 Later, at home, Honeycutt is startled when he learns that his 6 year-old son, Ely, idolizes Krang and his campaign of conquest. Both Honeycutt and his wife, Marra, are disturbed by this. Marra encourages Honeycutt to join the Neutrino Resistance and escape from Krang, before they can help him do anymore evil. Sneaking back into his lab, Honeycutt deletes all his files and steals SAL. His family then escapes back to Neutrino with the Resistance.

Twenty months ago. Aware that Krang has a portal to Earth, Honeycutt has been working with the Resistance to even the playing field by building one of their own. Unfortunately, the portal only works about 60% of the time; destroying anything that tries to go through it the other 40%.

Suddenly, Sergeant Granitor of Krang’s Stone Warriors strikes with a fleet of airships, bombarding the Resistance’s secret headquarters. Following protocols, the living quarters are put under lockdown, trapping all the families in the burning building. The only way to get to the command center and override the protocols is to go through a wall of flames that are edging closer and closer to the lab. Knowing he has no choice and must save his family, Honeycutt uploads his consciousness into SAL and leaves his body behind to burn. 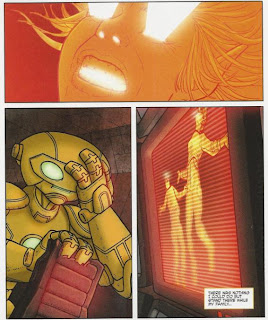 Honeycutt makes it to the command center and succeeds in opening the bunkers to let the families out. However, Granitor was expecting this and calls in an airstrike. All the families, including Honeycutt’s, are killed. As Granitor and the Stone Warriors move in to take back the SAL android, Honeycutt takes a chance and escapes through his portal to Earth. Granitor chases him into the busy streets of New York, but Honeycutt loses him by changing forms into a human.

Eighteen months ago. General Krang contacts Baxter Stockman and Chet, charging them with the responsibility of finding and retrieving the “Fugitoid” (a portmanteau of “fugitive” and “android”; a name Chet finds amusing). Stockman rolls his eyes and figures finding one robot in New York City can’t possibly be that hard. 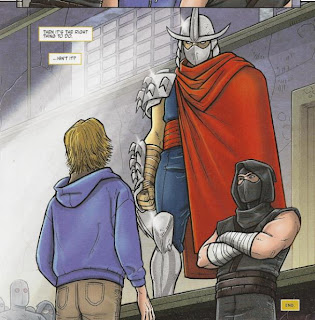 Present day. Sneaking through alleys and entering a warehouse, Honeycutt ponders what all he’s accomplished since coming to Earth. Seeking to thwart Krang, he took on the guise of “Chet” and infiltrated Stockgen (Chet’s stutter being the result of a broken voice box). He considered making allies within the organization, such as April, but instead chose to find aid from an outside source. In retrospect, he realizes he’s made a deal with the devil (recalling how the organization he sided with kidnapped Splinter), but he’s left with no other choice. “Chet” is then escorted through the warehouse facility by a pair of Foot Soldiers and is taken before the Shredder.

*The Neutrino Resistance was first glimpsed in TMNT (IDW) #7.

*This issue was originally published with 3 variant covers: Cover A by David Petersen, Cover B by Paul McCaffrey and Cover RI sketch variant by Petersen.

Well, I’ve finally gotten what I’ve been begging for since this book began over a year ago: The Krang subplot has finally been kicked into high gear! Aw yeah!

My introduction to the Ninja Turtles, like a lot of folks my age, was through the Fred Wolf animated series. While it hasn’t aged well, I still have a fondness for it and I’ll always respect the diverse mythology wholly separate from the Mirage comic that it constructed. One of my greatest disappointments of the Fred Wolf cartoon, and even Archie’s TMNT Adventures which spun off from it, was that the goofy conflict-a-week antics overshadowed the world-building of that universe. In particular, everything involving Dimension X, the Neutrinos and Krang’s interdimensional conquest were squandered in exchange for shrink rays and love potions and giant monkeys and pizza jokes.

There was a much bigger story going on in that universe which we never got to see, is what I’m saying.

So, naturally, when I started reading IDW’s TMNT series and found that it would be incorporating elements from the Fred Wolf series, fleshing those ideas out to their fullest potential, my money pretty much leapt from my wallet on its own accord. Now, don’t misunderstand me; I enjoyed the first year of storytelling in IDW’s comic (especially the revised origin which sounds so bizarre in summary but was executed so fantastically). However, THIS is what I’d spent a year salivating for. I’m a Mirage fan through and through, but Krang, the Technodrome, the Rock Soldiers/Stone Warriors and Dimension X were what I grew up with.

Writer Paul Allor deserves some serious props for this issue of the TMNT Microseries. The original Fugitoid (microseries) #1 was a very special Mirage comic, in that the content actually predated Mirage as a company, as well as the Turtles. It was the first major collaboration between Kevin Eastman and Peter Laird and so to go back and “mess with” a story like that was probably more than a little intimidating. What Allor does is incorporate the basics of that original story with the intricate tapestry of the IDW ongoing series. The issue hits all the major bullet points of the Fugitoid’s origin, whilst otherwise doing its own thing and making it entirely unique to the IDW universe.

What’s funny is how the Fugitoid still functions as a keystone on the same fundamental level in IDW as he did in Mirage. In the Mirage universe, he was brought into the TMNT comic to connect the Turtles with the more expansive outer space mythology they otherwise would never have had contact with; in Mirage’s case, that meant the Federation and the Triceratons. In this case, Fugitoid does much the same, bringing the war between Krang and the Neutrinos to the Turtles (albeit, they’re still unaware of this). When rebooting a character’s origin, *this* is the way I like to see it done. Allor doesn’t ape Eastman and Laird’s origin step by step, but neither does he throw it away and build from the ground up something unrecognizable. Everything that makes the Fugitoid the Fugitoid is here, simply adapted for a different universe while serving the same purpose.

If there’s one thing I’d actually qualify as an improvement over the source, it would have to be the decision to give Honeycutt a family. In the original story, he was simply an old recluse and his transformation into SAL was a contrived accident. Here, the transformation is far more tragic and personal as he elects to sacrifice his humanity to save his family and still fails, in the end. While perhaps a tad “grimdark”, it’s written really well and gives us a better idea of Honeycutt’s personality and stakes in the drama than making him a clutzy old man that got struck by lightning.

The issue is also full of revelations, thanks in part to it spanning such a length of time and interweaving between issues of the ongoing. While we’ve known that Chet was up to something for a while now, the reveal that he was the Fugitoid all along struck me as a genuine shock; well played, Waltz and Allor. Though we had a pretty good notion who Chet was working for, it’s still good to have the question formally answered (and the idea that Honeycutt would team up with a criminal organization to stop Krang was a nice touch, showing how desperate he’s come to get revenge without necessarily compromising his character). The idea that Krang wants the shape-shifting SAL so badly makes me think he plans to create his own army of robot Foot Soldiers, ala the Fred Wolf cartoon, and that’d be pretty awesome.

Artist Paul McCaffrey does a wonderful job with this issue, as it contains a lot of action and technical detail. His layouts are full of energy; the entire sequence where Honeycutt uses SAL to save his family, only to end up losing them is superbly rendered. I suppose my one grievance is that the shape of the Fugitoid’s eyes makes the robot look a little feminine (when the cover was first revealed, I thought Honeycutt was going to be a woman in this universe). John-Paul Bove’s colors are excellent and he really brings the alien technology to life with his multitude of glowing effects. At times I feel he overdoes the color gradients just a bit, but all in all, his colors complement McCaffrey’s pencils splendidly.

TMNT Microseries #8 is, essentially, the issue I’d been waiting for since Day One. A deeper, more detailed look at the war between Krang and the Neutrinos is something I’ve been wanting since I was a little kid, so naturally this issue would have a major appeal for me. But even if you’re new to the Krang and Neutrino stuff, this story does major work in building the IDW universe, tying in plot elements seeded a year or more ago and maintaining the integrity of Eastman and Laird’s first collaboration whilst still doing something all its own. Probably one of the best TMNT issues IDW has put out yet and the Turtles are only in one panel.

Grade: A (as in, “And if IDW finds a way to throw in the Mutastones, one of the few bits of Neutrino back story we ever got, I’ll give them my liver”.)