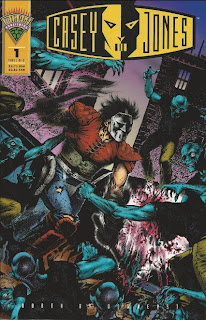 “North by Downeast, Part One of Two”

It’s a dark and stormy night and down in the sewer lair, the Turtles are killing time in their own way. Leo is sharpening his katana, Raph is lifting weights, Mikey is reading a book and Don is monitoring the activity of the Foot Clan on his computer. Suddenly, a stranger opens the secret entrance and lets a flood of water wash in. The water shorts out the electricity, darkening the room, and the Turtles leap to the ready. The stranger lights a match and reveals himself to be Casey Jones. He says that on Friday, while they were up in Northampton, he was in New York having the weirdest adventure… 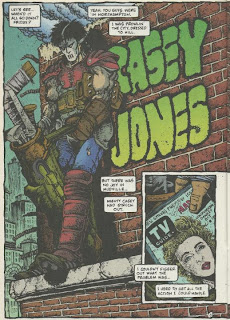 Prowling the Bronx, Casey is disappointed at the overall lack of criminal activity for him to punish. And worse yet, he’s missing one of his favorite shows. Casey spends the rest of the night peeking in through windows, hoping to find a television set with his program on. He never finds his show, but he does find a trio of thugs lifting a lobster tank through a window and down a fire escape; the punks having designs on fencing the lobsters for crack. Casey trips the thugs with a fishing line, sending them and the tank toppling down the fire escape and into the alley below. After delivering a beating, Casey considers taking one of the lobsters home for dinner.  His indecision causes him to be caught unaware and he's cold-cocked over the back of the head.

The sensation of slimy tentacles messing with his gear brings Casey back to consciousness a few minutes later, and he finds a swarm of strange blue men picking through all the loose lobsters (with one of the blue men fascinated with the “human in a shell”). Casey doesn’t waste time asking questions, and grabbing a baseball bat and ski pole, wails on the blue men. Beating them into submission, Casey loses the upper hand when he’s distracted by the theme song to “Dragnet” coming from a nearby apartment's TV. The blue men cold-cock him yet again and he goes out like a light. 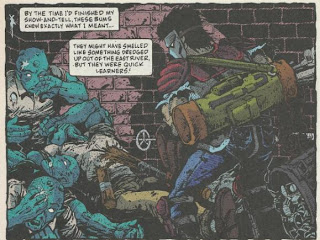 When Casey comes to, he finds himself submerged underwater and being dragged through a cave. The blue men decide that he isn’t worth hauling the rest of the way and, after peeling him of his gear and mask, discard his body. Casey is ejected, not from a cave, but from a humongous ammonite shell and sent hurtling through the undertow off the coast of New York. Luck is with him, however, as he is caught in the line to a lobster trap and hauled to a fishing boat on the surface.

The fisherman pulls Casey onboard and brings him to with the smell of some rotten bait. The fisherman then takes off his slicker, revealing himself to be… a fisherwoman. And in a bikini, no less. Casey composes himself and the lady introduces herself as Gabrielle Lau ("Gabby" for short). She welcomes him onto her boat, the Lobster Princess, and asks how he came to be tangled in her trap line. Casey tells her all about the blue men and Gabby instantly recognizes their description as matching those of the Malacostra. Casey doesn’t know what a “Malacostra” is, so Gabby elaborates… 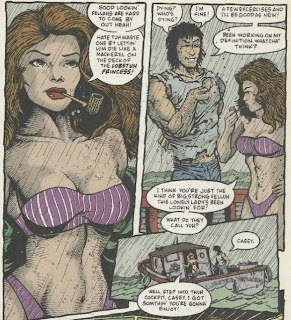 A long time ago, there was a race of lobster creatures from the planet Neptune. When Neptune’s gravitational field began to weaken, the leader of the Malacostra, Big Snapper, recognized that his people needed to leave their homeworld in search of a new one. The Malacostra refused to leave, though, so Big Snapper made the journey to Earth by himself. Many years later, Naptune’s gravitational field eventually weakened to the point of making the planet uninhabitable to the Malacostra, so the lobsters finally conceded to fly to Earth. When they arrived, however, they found Big Snapper not so welcoming. He had mated with the indigenous pygmy lobsters and formed a new kingdom to rule. Cursing his former subjects, he transformed them all into blue quasi-men, doomed to live on dry land. In order to undo the curse, they must find the Royal Roe: the one lobster on Earth that carries Big Snapper’s bloodline. The Malacostra have been searching ever since.

*The story concludes in Casey Jones #2.

*As the Turtles are shown living in the sewer lair, the chronology of this story is a little tricky. I would place it after TMNT (Vol. 1) #21, when the Turtles returned to their sewer lair in New York, but before Tales of the TMNT (Vol. 1) #6, when they give their lair away to Leatherhead. The fact that Donatello is shown monitoring the activity of the Foot Clan would seem to confirm this placement.

*The 2-issue Casey Jones miniseries collects the 6-part “North by Downeast” story originally serialized in the anthology title Plastron Café. Mirage cancelled Plastron Café after only 4 issues, leaving this storyline unfinished until it was collected in this miniseries.

Rick Veitch was one of the great guest contributors to the Mirage TMNT series, right up there with Michael Zulli, Rick McCollum and Bill Anderson. It’s a shame he ended up having a falling out with Mirage after the fiasco involving the “mandatory retroactive work-for-hire agreements”, as it’s made his contributions harder to come by (none of his stories have been reprinted since 1991). While his best known TMNT work is “The River” trilogy, one of my favorite Veitch-crafted Turtle stories is “North by Downeast”, which is really a Casey Jones joint.

Veitch scripted and penciled all his work for TMNT and he has this wonderfully dirty, murky style that I first fell in love with while reading his run on Swamp Thing (and his turn at author is extremely underrated and terminally overshadowed by the preceding Alan Moore run, in my opinion). Eastman’s inks compliment Veitch’s style superbly, as do Lavigne’s colors, and I actually think his pencils wind up looking better in these stories than they did on Swamp Thing (where the inks never seemed heavy enough).

His layouts are some of my favorites, particularly the decompressed opening, as we track all the filthy rainwater on its path from the sky to the sewers before Casey makes his moody entrance. It’s a great set-up and befitting of this horror-themed storyline. What I appreciate is that Veitch doesn’t overdo the decompression, merely drawing it out for the intro to get the audience hooked; the remainder of the story is very compact and fast-paced (Jim Lawson probably should have been taking notes from this story before he wrote “The Brain Thief”).

Veitch’s Ninja Turtle stories always struck a chord with me, I think, because we both seem to share the same tastes. Not just in terms of horror-themed storytelling, but an overall preference for Casey Jones. Veitch loved writing the guy and was one of the best authors to handle the character (often even outdoing Eastman and Laird, who could never seem to agree if Casey was an imbecile or a douchebag). Veitch’s Casey is the perfect balance of “streetwise” and “foolish”, proving himself a competent fighter but still succumbing to the shortcomings of his meager attention span. His quest to find a single television set showing his program was pure Casey and his inner monologue was amusing the whole while.

One of the more striking things about “North by Downeast” is how bizarrely it transitions from “gritty street-level brawling” to “lobster men from Neptune”. While the “big fish story” Veitch was going for becomes a little too on the nose once the actual big fish (or lobsters, I guess) are introduced, it certainly makes this tale pretty unpredictable. Casey’s propensity for exaggeration would later crop up in Tales of the TMNT (Vol. 2) #37, but I think this story did the idea more justice.

When it comes down to a competition between the original black and white version of this story published in Plastron Café and the colorized version published in the Casey Jones miniseries, I’d go with the colorized version all the way. Ignoring the fact that the colorized version is the only way to read the whole adventure, Lavigne’s colors really enhance the overall mood of the story, particularly in regards to the little touches, like the glow of Don’s computer monitor or the flickering light of Casey’s matches or the grey sky above the angry, green sea. Going back and reading the story in black and white after experiencing the color version, it just feels like something is missing.

Hopefully IDW will be able to come to an agreement with Veitch where Mirage failed and this story will get its just reprint. But even if it doesn’t, I don’t think the issues are too difficult or expensive to find. Mirage was printing in pretty high quantities during the early 90s.

Grade: A (as in, “And I love it when writers add some variety to Casey’s arsenal, like the ski pole or the fishing rod in this issue”.)
Posted by TMNT Entity at 5:11 PM