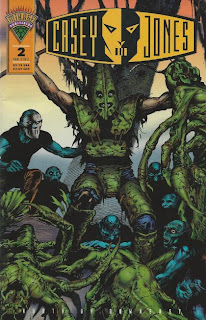 
“North by Downeast: The Conclusion”

After Gabby finishes telling him about the Malacostra, Casey isn’t quite so inclined to believe her. Gabby provides some incontrovertible evidence, though, when she opens up the hold and shows the corpse of a lobster-monster that she caught a few days ago. Casey instantly becomes a believer in the lobster-men from Neptune.

Suddenly, the Lobster Princess is nearly run down by a Coast Guard cutter. Casey and Gabby take a peek at the personel onboard and see that they’re all Malacostra. Gabby reveals that the Malacostra have found the Royal Roe and are taking it someplace to perform the ceremony to summon Big Snapper. They trail the ships to Hog Island and find that all the Malacostra have gathered around a bonfire in the middle of Fort Gorges, performing a ritual. Gabby is turned on by the spectacle and wants to get freaky with Casey, but he tells her to go back to the ships and see if any of the human passengers are still alive. Meanwhile, Casey hollows out the Malacostra corpse and fashions its exoskeleton into a new set of gear. 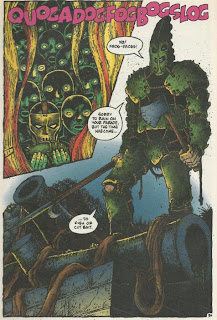 Casey then interrupts the ceremony from atop the wall of the fort. The leader of the Malacostra (wearing Casey’s purloined hockey mask) orders the others to kill the human. Using a harpoon and an axe, Casey cuts one of the old cannons free and sends it toppling down into the crowd, crushing several of the blue men. Casey then leaps down into the fray and provokes a riot by scaring a large enough crowd with his weapons. The Malacostra, in their panic, cause the walls of the fort to collapse.

Eventually, Casey digs himself out of the rubble only to find that Big Snapper has heard the Malacostra’s pleas and lifted their curse. The blue men have now been transformed back into giant lobsters. Casey surrenders to a berserker and mindlessly hacks and slashes his way through the shellfish, finally coming face to face with the lobster that stole his mask. As the Malacostra grips him in its claw, Casey buries his axe in its head, splitting the forehead section of his own mask. Having won, Casey discards his lobster armor and reclaims his mask… only for a stray ordinary lobster to pinch his toe with an unrelenting grip.

As Casey hops around with the Lobster clinging to his foot, all of Hog Island quakes and erupts, revealing itself to have been Big Snapper, asleep for centuries. Snapper’s awakening causes a huge tidal wave and Casey is sent flying through the air. He lands on the deck of the Coast Guard cutter and sees the giant lobster bearing down on him, hungrily. Thinking quickly, Casey cuts loose the cutter’s store of depth charges and sends them tumbling toward Big Snapper. As Casey leaps over the side of the cutter (with the tiny lobster still on his toe), the charges detonate and Big Snapper is obliterated. 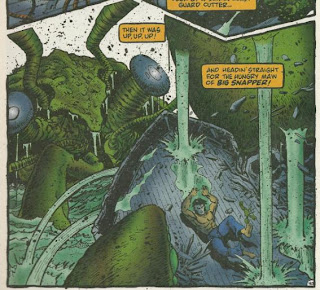 Casey later comes to in the luxury suite of an ocean cruise ship. Looking out the window, he sees Hog Island is gone, but none of the tidal waves have touched nearby Portland. Casey figures that the explosion cut down the worst waves and that the Coast Guard has likely covered up everything that has happened in order to save face. Sitting on the nightstand next to his mask is the tiny lobster and a note from Gabby. Gabby says that the cruise ship is abandoned and they have it all to themselves. She invites him to join her in the hot tub, but before he accepts, Casey decides he needs to fill his stomach.

Taking the lobster to the galley, he drops it in a pot of boiling water and then chows down on it with some butter sauce and a rerun of M-Squad on the tube. Gabby comes down to the galley to see if Casey’s ready for the hot tub, but is horrified to see him munching on the lobster. Gabby says that the lobster was the Royal Roe and that with its death, Big Snapper’s lineage has been destroyed. Even worse, Gabby transforms into a lobster-monster, revealing herself to have been Big Snapper’s queen and the one to have birthed the Royal Roe. Gabby seizes Casey in her claw and intends to crush him. Blacking out, Casey reaches for a meat cleaver and starts swinging… 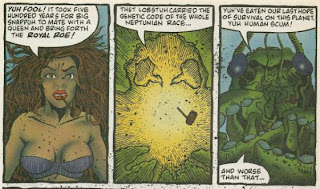 Suddenly, Casey’s last match goes out and the sewer lair is again plunged into darkness. Donatello gets the electricity work again, but as soon as the lights come on, Casey is gone. The Turtles suspect Casey had made the whole story up, though they’re curious as to what happened to Gabby. Leo looks down on the ground and finds something Casey dropped: a corncob pipe (just like the one Gabby smoked) split cleanly in two down the middle.

Outside, Casey takes a walk in the pouring rain.

*This story is continued from Casey Jones #1.

*The first 7 pages of this issue (numbered 25 through 31) were originally printed in black and white in Plastron Café #4.

“North by Downeast” comes to an explosive conclusion and it’s still one of my favorite Casey stories to reread.

It’s gory and crazy and weird, but the tale moves at a swift pace, hurling Casey from one insane predicament to another, and you can hardly tell that the thing was serialized when taking it all together. The only real artifact of the serialization style is the break between the two issues of the miniseries (they cut off Part 4 just as it was getting started rather than breaking the story cleanly in two after Part 3). As a result, the miniseries has a weird non-cliffhanger at the end of issue #1 and a perplexing non-introduction at the beginning of issue #2. Again, they really should have divided the serial cleanly in two for the miniseries publication, but I suspect there may have been some problem regarding page numbers per issue that resulted in the weird split during Part 4.

Anyway, even if you think Casey fighting lobster-men from Neptune sounds a little stupid, “North by Downeast” is probably the best trip inside of Casey’s head since TMNT (Vol. 1) #14. Veitch’s inner monologue for Casey shows a great understanding of his character; Casey isn’t necessarily stupid, but a guy who prefers to rely on his gut instinct as opposed to over-thinking a situation. Or as Veitch words it, “I don’t think. I do!”

Whether you take Casey’s story as having actually happened or not is up to you, but either way I think it works just fine (the Turtles have met stranger foes than alien lobsters, so I wouldn’t rule this out for “silliness”). As an imaginary story, it fits right in with Casey’s other spotlights in tales like “Casey Jones: Private Eye”, “The Unmentionables” and “Casey in Point”. Casey has always been shown to exist in his own little fantasy world (this is a guy who put on a mask and decided to become a vigilante superhero, after all) and he has a pretty wild imagination (he was shown dabbling in art in "Fun with Guns" and "I, Monster"), as well as a tendency for the melodramatic (his Cryptkeeper-style presentation of this horror-themed story rings similarly to his film noir-style presentation of the private eye-themed “The Unementionables”).

While “North by Downeast” is far from essential, I think it acts as a great compliment to “The Unmentionables” and the other Casey-centric stories from earlier in the run of TMNT. Such stories show a younger, wilder Casey more willing to indulge his own delusions and fantasies, which I find to be a far more fun interpretation of the character than the hard-drinking, bar-brawling drunk that would eventually hit rock bottom by the time of “City at War”. Either way, Casey is inevitably forced to grow up and put away his immature attitudes and delusions, which sort of made the character less interesting in the later volumes. While I wasn’t quite so sad to lose the “douchebag drunkard” side of the character, I did come to miss the “runs away with his own imagination” aspect.

Grade: A (as in, “And bikini or not, I don’t think there’s anything less attractive than a woman smoking a corncob pipe and talking like a scurvy sea captain”.)