A Splinter in the Eye of God? 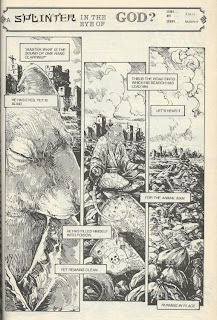 “A Splinter in the Eye of God?”

Meditating in the ruins of a city, atop a mountain of toxic waste canisters, Splinter contemplates the sound of one hand clapping.  He is approached by his four terrapin pupils, who clap their hands and then persecute him.  Knowing he will not find the answer here, Splinter flees.

He flees into a beautiful forest unspoiled by man.  Taking a dove into his hand, he concludes that the answer to his question is peace.  Splinter hears the sound of agreement rise from the depths of a pond.  It is the skeletal figure of Death, who claims to be a bringer of peace.  The dove dies in Splinter’s hands as Death dematerializes.  Overcome with fright, Splinter is relieved that Death did not choose to come for him at that moment.  But if Death is peace, then can peace be the answer? 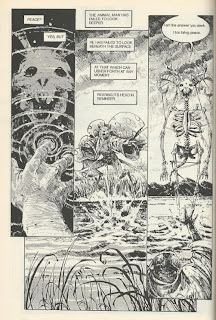 Splinter is awoken from his meditation by his four turtle students, who ask him if he is okay.  Splinter asks for privacy and says that he will rejoin them shortly.  As Splinter holds the dead dove in his hands, he considers that the sound of one hand clapping is the same as no wings flapping.

*This story was reprinted in the TMNT: Souls Winter trade paperback published by Mirage in February of 2007.

“A Splinter in the Eye of God?” is an excellent complement to the “Souls Winter” trilogy, hitting on several of the themes and imagery (particularly Zulli’s amazing rendering of Death).  While Murphy’s commentary on environmentalism is ever-present (but when ISN’T it?), the story is more about Splinter trying to contemplate the answer to an unanswerable question (no, Bart Simpson’s solution doesn’t count) and pondering the true meaning of peace.

Sure, Death does indeed bring the ultimate peace, but I’m likewise reminded of that Robot Chicken sketch where the old lady goes to God to talk about the Grim Reaper: “I kind of think dying is scary enough without a robed skeleton with a knife popping out at you.”

Zulli’s art is amazing and this 8-page short provides a tempting taste of what his “Souls Winter” trilogy was going to look like.  Zulli’s a very well-rounded artist who excels in not just action layouts and character design, but in environments, too.  His renderings of nature, for instance, are stunning and his anthropomorphic characters manage to retain their animal features without being cartoonishly overdone.  His Splinter is the most genuinely rodent-like rendition of the character I’ve seen… albeit perhaps more “mouse” than “rat”.

I’m rather glad that the 2007 “Souls Winter” trade saw fit to collect ALL of Zulli’s work under one cover, as hunting down some of the rarer publications to feature his shorts could be a bit of a pain.  “A Splinter in the Eye of God?” looks fantastic and I’d recommend it on the art alone.