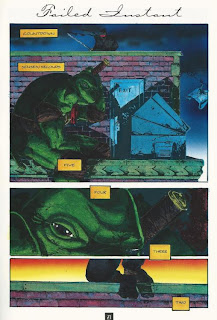 On a rooftop, a Turtle crouches at the edge with his hand ready at his katana.  A ninja sneaks up behind him, wielding a sword and preparing to strike.  the Turtle is aware of his enemy’s presence and mentally prepares himself to counter the attack.

The ninja strikes and the Turtle lets his body move intuitively in response.  With his left hand, the Turtle swings his katana, and with his right, he swipes at the ninja’s hood. 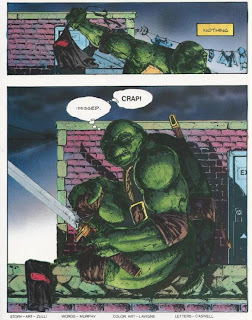 Unfortunately, the Turtle misses and the ninja vanishes as quickly as he came.  All the Turtle has to show for his counterattack is the ninja’s discarded hood, clutched in his grip.

*This story was reprinted in black and white in the TMNT: Souls Winter trade paperback collection, published by Mirage in February, 2007.

Zulli’s third and final TMNT short strip, though he goes out with some lavish color work by Mirage’s favorite colorist, Steve Lavigne.

“Failed Instant” isn’t much on story, but it’s a nice display of “things going wrong”.  Even the Turtle (none of the TMNT have names in the "Souls Winter" universe), with all his practice and skill, still misses from time to time.  The slow build-up is a nice bit of suspense and the fact that the Turtle winds up failing in his counterattack makes for a somewhat humorous twist ending.

I’ve always been kind of mesmerized by this story, chiefly because of the apparition-like attack waged by the lone ninja.  He strikes once, fails to connect, then vanishes like a phantom.  I find that far more menacing than a villain that attacks, fails and then keeps attacking until he gets stabbed to death by the protagonist.  There’s something frightening about a villain that waits for his target to let their guard down, attacks, and if he misses, escapes to repeat the stratagem all over again at a later date.

It’s an intelligent maneuver I wish the mainstream Foot Clan would employ over “throw wave after wave of men at the Turtles until they’re all dead”.

Lavigne’s colors are a nice complement to Zulli’s pencils, though he sort of mutes the exaggerated beak that Zulli typically gives his Turtles.  As it is, the Turtle looks somewhere in-between Zulli’s “Souls Winter” style and his “Mirage” style as seen in “O-Deed”.  As a result, I’m not entirely sure if this is meant to be “Souls Winter” continuity or Mirage continuity.  On the first page, the Turtle even has his bandana hanging loose around his neck, and the “Souls Winter” Turtles never wore bandanas.  Of course, the bandana disappears in all subsequent pages, so who knows? The Foot Soldier is also drawn in the design of the "Souls Winter" Foot Soldiers, not the Mirage Foot Soldiers, so it's a little confusing.

Anyway, this is a neat little piece with some fine art and coloring, though the lack of story makes it hard to really “grade”.  The most I can say is, “I dig it”.

Grade: N/A (as in, “Now if this were Mirage continuity, it would make a pretty good ‘Old Man Leo’ story for the Future Mirage era”.)
Posted by TMNT Entity at 8:55 PM