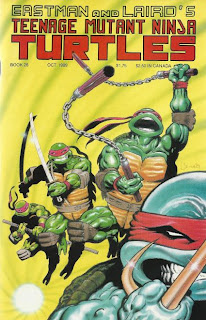 In Northampton, Splinter follows the course of the river with his spirit until at last he finds Bloodsucker, stomping toward a presence who sits at the source of the river… waiting…

On the side of a dirt road, Casey and April struggle to fix the transmission of their Chevy.  Luckily, their car just happened to break down right where a canoe has been stashed.  Abanak says that the entire situation was orchestrated by the old man whom they seek.  In all the commotion, the Turtles lose track of Raph.  They find him in a bush, confronted by a weasel.  Despite being devolved into a normal pet shop turtle, Raph still has his fighting spirit and scares the weasel away with a few sharp bites from his beak.  Boarding the canoe, the Turtles and Abanak continue upriver while Casey and April stay behind to fix the Chevy.

Following the river through a course not on any map, but guided by Abanak’s dreams, they come to a huge lake which Abanak claims is the true source of the river.  Their canoe is overturned by a school of fish and they are all carried to the base of a waterfall by them.  The fish then carry them up the waterfall and they find a large stone in the middle of the river.  Taking position in the center of the stone, they are overcome by a powerful surge of energy. 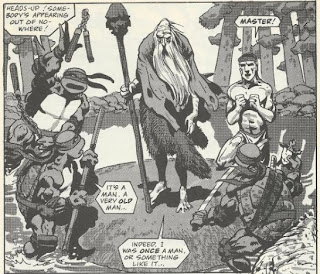 Splinter, his mind and spirit still free from his body, is also overtaken by that surge of energy and feels himself being trapped by it.  The energy coalesces into a wizened old man.  The old man explains to them that he is of a race that dominated the Earth in the time of the dinosaurs, but their civilization was destroyed by nuclear war.  The survivors turned their backs on technology after that and began communing with nature in search of knowledge and true power.  Their spirits soon merged with the rivers of the world and the Connecticut River is his river.

The Turtles ask the old man if he can restore Raphael and he says that he could, but does not wish to.  Bloodsucker then comes stomping up the falls and takes his place at the old man’s side.  The old man explains that he sent the leech to feed off of Raph’s mutagen-laced blood so that he could study the effects of mutation.  He intends to likewise devolve the other three Turtles and learn about mutation through their blood.  The Turtles ready themselves to attack, but the old man is prepared.  Having already snared Splinter’s consciousness in his trap, he uses the will of the rat to paralyze the Turtles.  He then sicks Bloodsucker on them to drain them of all their mutagen-laced blood.

Raphael swims up to Bloodsucker’s feet and bites down on his toe.  Bloodsucker then tumbles over the falls with all the turtles still in his clutches.  Abanak takes up Leo’s fallen katana and attacks the old man, accusing him of forsaking the Native population and encouraging industrialists to pollute the river simply so that he could increase his own perverted knowledge (and thus become more powerful). The old man blasts Abanak into the forest with a bolt of energy.  The momentary distraction is enough for Splinter to free his mind from the old man’s trap and, with a total surge of will, sends a psychic counterattack upriver.

At Booders Falls, the three kids are busy chiseling their dream symbols into the rocks by the river, intent on fulfilling their promise to Abanak.  Suddenly, a huge glowing claw comes surging up the river.  A few miles further, April and Casey are still dealing with the Chevy when they see the claw come rocketing by.  And finally, at the top of the falls, the old man registers the counterattack a little too late and is struck by the huge glowing fist.  Splinter’s attack has cut the old man off from the energies that have sustained him for millennia and he quickly begins to decay. 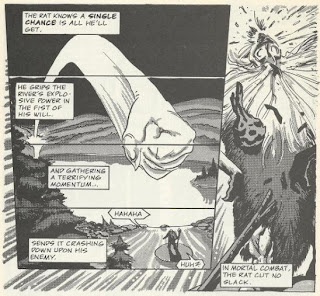 At the base of the falls, Leo is freed from his paralysis just as Bloodsucker attacks.  Mike and Don come to his aid and they dogpile on the leech-man.  Bloodsucker is still too strong and throws them off, but his attack is momentarily delayed by Raph, who takes another bite out of him.

At the top of the falls, the old man begs Abanak to help him.  He says that Abanak is capable of the same powers as he is, but Abanak does nothing.  The old man attempts to heal himself but begins de-aging rapidly, eventually turning into a baby before vanishing entirely.

With the old man gone, Bloodsucker begins to steadily weaken.  At the same time, Raphael is growing larger and larger thanks to the blood he continues to slurp from the leech-man’s throat.  Raph wrestles Bloodsucker behind the cascade of water and the two disappear.  Don and Mike want to go in and help their brother, but Leo says Raph has to fight this battle on his own.  A moment later, Raph comes stomping out, demanding a beer.  He says he pulled a turnabout on Bloodsucker, sucking the villain’s mutagen-laced blood and restoring himself in the process.  Bloodsucker, now just a normal leech, is spared a squishy death by Raphael and simply flicked back into the river. 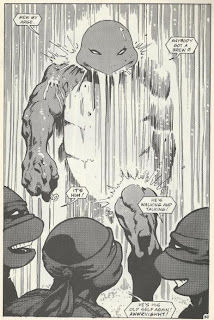 Abanak, speaking from the top of the falls, says that he has found his destiny and must take the old man’s place as the spirit of the river.  He then commands the fish to carry the Turtles back home.  Riding the fish, the Turtles pass April and Casey (who have fixed the car and sparked a romance in the process) and assure them that Raph is back to normal.  Passing Booders Falls, they see the kids finishing their carvings and tell them that Abanak sends his regards.  Finally, they reach Northampton where Splinter sits, waiting.  They each bow respectfully to their master (and that includes Raphael).

Elsewhere, a human embryo floats helplessly in the river current.  It is quickly inhaled by a small leech with vague memories of tasting mutant turtle blood.

*Raph will be seen dealing with the psychological fallout of this story arc in TMNT (Vol. 1) #28.

Despite a weak middle, Veitch’s “River” trilogy manages a strong finish with one of the better battles in Volume 1.  Though he turns out to be nothing more than a pawn in the old man’s game, Bloodsucker still made for a powerful enemy; one that actually gave the Turtles a run for their money.  Many of the most memorable villains of the Mirage series weren’t particularly great threats.  Leatherhead was never really a bad guy to begin with, Savanti Romero and Complete Carnage were comedy relief stooges and Rat King sort of just operated from the shadows, not being a physical equal.  There were plenty of disposable thugs and the occasional monster here or there but, looking at Volume 1, Bloodsucker is probably the most serious threat the Turtles face aside from, obviously, the Shredder.

In a way, he’s almost too powerful.  He can’t be killed no matter how you chop him up, he gains the knowledge and skills of whatever he eats and he has the ability to devolve the Turtles by sucking their blood.  From the TMNT’s point of view, he’s a pretty terrifying enemy and easily one of Volume 1’s most memorable foes.  He is, of course, “off limits” due to rights issues between Mirage and Veitch, which is a shame, as I’d like to see him revived in another medium, be it the new cartoon from Nick or the new comic from IDW.  Of course, they could always do a run-around and use Wyrm, the leech mutant with all the same powers (can reform himself after being chopped up; feeds on mutagen-laced blood) that Viacom owns lock, stock and barrel.  But that’d be kind of a dick move toward Veitch.

“Old Man River” suffers from some… “what the fuck” moments, to put it vulgarly.  Veitch rather nonchalantly throws the existence of Atlantis or whatever that ancient civilization was out there in a brief flashback and it just seems so random and weird.  And, of course, it’s never referenced again by any other writers.  Even ignoring the whole “off limits” status of “The River”, the fact that every river in the world is home to some Atlantean sorcerer would seem rather important.  But that’s always been my biggest grievance with the Mirage universe as a whole; a lack of cohesion.

On the other hand, a really small moment in this issue is actually really important to the ongoing narrative of Volume 1, and that’s the blossoming of April and Casey’s romance.  Before now, they’ve only ever been shown just coexisting with each other with maybe a romantic undercurrent just beneath the surface.  This is the point where they actually start to show affection toward one another (April gives Casey a kiss for the first time, I think).  If you purge “The River” from continuity as Laird has, you amputate an important chapter in the development of their relationship which really undercuts the tragedy of their breaking up during “Shades of Grey”.  Regardless of editorial (and legal) mandates, “The River” is not only a good story arc in TMNT Vol. 1, but an important one, too.

Veitch also seems to have hit his stride with the characters in this installment, too.  I mentioned in my review for the first chapter that he didn’t really have a solid handle on their voices and seemed to mix up their personalities and traits.  Here, the Turtles are all unique in their speech (save perhaps Don, who never has anything technical to say) and Raph stops acting like a whimpering crybaby like he did in the first chapter and behaves like his beer-swilling self.  Mike even yells “cowabunga”, which probably pissed off a few readers in ’89.  Casey’s dialogue about giving up on Raph as a lost cause can either be interpreted as macho bluster or mischaracterization, depending on how forgiving you are as a reader.

“The River” is one of my favorite arcs from the guest era and one of the better storylines from Volume 1 in general.  The middle section is a bore, but the bookending chapters more than make up for it.  This finale is the strongest installment in the arc and Veitch’s art sells it even moreso.  The bit where Splinter sends a psychic sucker punch barreling upriver is a great example of how to build momentum in storytelling.

Grade: A- (as in, “Although we may never see this storyline collected again, the original issues are pretty easy to come by and pretty cheap, too”.)
Posted by TMNT Entity at 12:13 PM