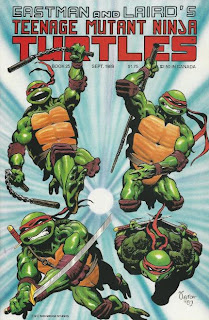 In Northampton, Splinter meditates and sends his spirit along the river, searching for his sons and tracking their progress. 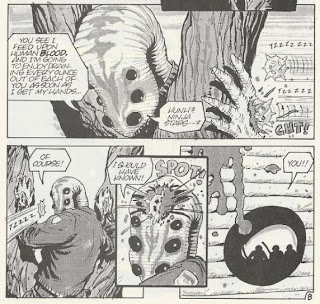 In a small factory town called Booders Falls, a trio of kids (Owen, Cookie and Ray) are heading down to the river to do some fishing.  They’re excited because the river has supposedly been cleaned of all pollution, but nervous that they’ll be caught by Officer Mannigan, who doesn’t want them fishing down there, anyway.  Even worse, they fear they might encounter a legendary ghost who leaves strange carvings in the rocks.  They have worse things to fear, though, as Bloodsucker (stilled disguised as a game warden) attacks them.  He’s about to suck the kids dry when Leo, Don and Mike intervene.  Pumped up on mutagen and human blood, Bloodsucker uproots a large tree and throws it at the Turtles, pinning them to the riverbed.  As the kids hightail it out of there, Bloodsucker gloats that he’ll return after the Turtles have drowned and feast on their dead bodies.

Back in Northampton, Splinter senses the danger his sons are in.  He searches for another spirit that can understand his plight and locates an individual carving symbols into the rock.

On the highway, Casey and April (and the devolved Raphael) enter Booders Falls at high speed, hoping to catch up with the Turtles.  Their speeding runs afoul of the crooked Officer Mannigan, though, and he quickly cuffs Casey and preps him for a trip downtown.  The three boys interrupt, telling Mannigan about the mutant animals they encountered by the river.  Casey uses the opportunity to dive off a bridge and into the river, where he vanishes.  Mannigan could care less if Casey’s dead or alive and takes all three kids and April into custody.  As he drives away, Raph falls out of the car and off the bridge.  Luckily for both Raph and Casey, the “ghost” of Booders Falls fishes them out of river and carries them into a cave system.

At the local jail, April isn’t pleased with being incarcerated without legal representation, but Mannigan assures her that the local industrial bigwig Samuel Booder VI owns all the judges, so she might as well clam up.  Mannigan calls his “boss”, Mr. Booder, who tells him that no one can know about the mutant animals in the river or it would mean serious financial losses for his factory.  Booder tells Mannigan to grab his gun and meet him at the factory.  Booder leaves April and the kids alone in the station house, but being a dunce, he also leaves the kids with their fishing rods.  They snag the keys off Mannigan’s desk and make their escape with April.

In the caves, Casey comes to, surrounded by the Turtles.  The Turtles introduce him to Abanak, the “ghost” of Booders Falls who saved all five of them from drowning in the river.  Abanak explains that he is the last of the Algonquin Nation; his people having been slaughtered by a settler named Colonel Booder many generations ago.  Booder’s most recent heir has been dumping toxic waste into the Connecticut River, poisoning the land.  The Turtles decide to suspend their search for Bloodsucker long enough to repay Abanak.  They follow him up a sewer shaft that leads to Booder’s factory while Casey reverses the flow of the waste drainage pipeline.

At the plastics factory, Booder tells Mannigan that he’s sick and tired of the “ghosts” that have been plaguing his family for generations.  Gathering a militia, he plans to route the Indian out of the sewers and caves and execute him.  Suddenly, they hear footsteps coming up the sewer access and all of Booder’s thugs take aim. 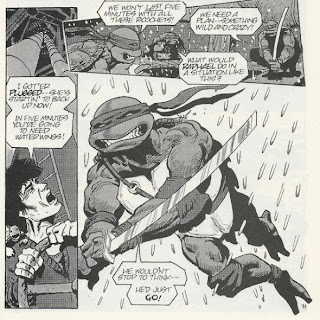 Abanak takes a load of rock salt to the chest and the Turtles drag him to safety while the militia opens fire with dumdum bullets (which can’t pierce their shells).  As Casey finishes reversing the sewage flow, the Turtles take out the guns with a flurry of shuriken.  Booder tries to escape, but is overtaken by a flood of backed up toxic waste.  He’s rescued from drowning by Abanak, but uses the opportunity to slug the Indian in the stomach and head to his car.  Booder climbs inside his vehicle, ready to get out of Dodge before the EPA arrives.  Unfortunately, he fails to notice Bloodsucker in the backseat and the giant leech-man promptly drains him of all his vital fluids. 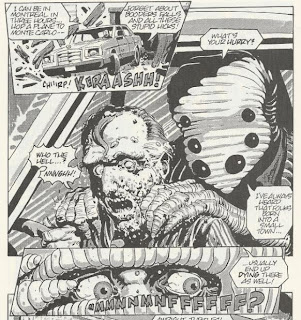 As the whole factory begins to collapse, April arrives in Casey’s Chevy and picks everybody up.  They escape shortly before the EPA arrives to clean the mess up and pass the three kids on their way out of town.  Abanak tells the kids that he’s ready to retire, but wishes to pass the title of “ghost” down to them.  Vowing to respect the land and nature, the kids accept the honor and responsibility.  Hitting the highway, Abanak says that he can guide them to an ancient spirit that dwells on the river and may be able to save Raphael.  None of them notice, though, that Bloodsucker is following in Booder’s car.

In Northampton, Splinter senses the presence of an old mystic who lives on the river.  The old mystic senses Splinter, as well.

And so begins a string of American Indian-related storylines in TMNT Vol. 1 that were all done by different creators who had no clue that the others were preaching the same stuff.  Following “The River”, Michael Dooney offers “Dreams of Stone” (which ties Complete Carnage and Radical into Indian mythology), and following that, Steve Murphy pens “Sonsof the Silent Age” (which uses fish-people as an analogue for the displaced Native population).  In his opening editorial for “Dreams of Stone”, Michael Dooney even apologizes to the readers for his part in the relentless string of Indian-themed stories, assuring us it was all an accident.  Kind of makes you wonder, though, what was going on in 1989 that just happened inspire three TMNT creators to write Native American-related stories at the exact same time?

“River Hymn” is the weak link in Veitch’s “The River” trilogy as it is a total distraction from the ongoing storyline.  The way the Turtles simply forget about Bloodsucker and saving Raph so that they can play eco-terrorists and fight the power is just… awkward.  I mean, was stopping the factory so urgent they couldn’t have come back and plugged up the pipe on their way home from saving Raph?  Time is of the essence and all that, you know.  The more time they waste playing Planeteers, the further away Bloodsucker gets and the less likely they are to restore their brother (lucky for them Bloodsucker decided to stick close by).

The script is just full of too many clichés.  A corporate head honcho that is willing to destroy the Earth and murder Indians and children and animals so long as it means profits, a crooked idiot cop that arrests people on trumped up charges because I guess that’s what everyone thinks small town cops do after watching “First Blood”, an American Indian character who gives long rambling speeches about how you cannot own land and how the White Man destroyed his people and then proceeds to cry at the sight of pollution like in that public service announcement from the 70s…

The list goes on.  There’s hammy dialogue like you wouldn’t believe, as Booder proceeds to make all manner of stupid puns near the end (“‘Cause I should give you back your land, shouldn’t I?  Let’s start with a couple of ACHERS!” as he punches Abanak in the stomach) or that awful bit with the kids talking about how pollution is totally bogus and that they’ll clean up the Earth for future generations.

“River Hymn” is just all-around groan-inducing once it gets away from the primary conflict involving Bloodsucker and goes into this distracting nonsense about river pollution and crying Indians.

It’s not all bad, though.  April is more useful in this story than she’s been in a long, long time.  Not only does she get out of jail, she fixes the broken gear-shifter in Casey’s Chevy with a screwdriver and some hairpins, showcasing some of that ingenuity that we haven’t seen since TMNT (Vol.1) #2.  It’s a rare treat in these old Mirage comics to see April being anything other than useless.  Savor it.

Veitch’s art is still some great stuff, and I got a real EC Comics vibe out of the scene where Bloodsucker surprises Booder in his car.  It just reminded me of something you’d see on a Jack Davis “Tales from the Crypt” cover.  And speaking of Bloodsucker, while his ramblings about world domination were hackneyed as all get-out, I love his casual style of speech.  In my head, he doesn’t have a melodramatic monster voice, but something more natural and human (in fact, in my noggin, he’s played by Bill Ratner using his Flint from “G.I. Joe” voice).

“The River” trilogy averages out to a good story, don’t get me wrong, but this is definitely the low point.