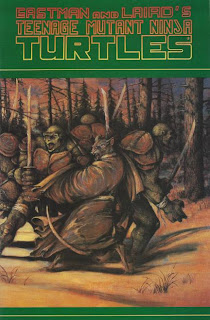 In a city, crows gather outside a window.  Inside, a man in samurai armor is delivered a cup of hot tea by a masked geisha.  The samurai says that the cup has served countless generations of Oroku.  Sipping his tea and then smashing the cup, the samurai says that the world is a torrent of change, resolving into sorrow, and it is a lesson he shall now teach his old enemy. 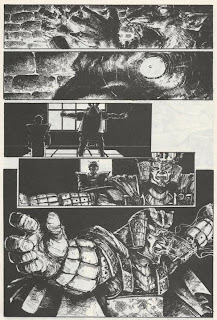 In a basement somewhere, a mutant rat, Splinter, is hit by a spiritual attack.  Realizing that his foe, Oroku Saki, has finally begun to strike, Splinter gathers the ingredients necessary to meet the threat.  Splinter confronts Saki on the astral plane, but Saki defeats him handily.  Realizing that he is too old and weak to battle his nemesis alone, Splinter swallows four ancient talismans (representing earth, fire, air and water) and performs a mystic ritual.

Sensing Splinter’s workings, Oroku Saki (now known as the Shredder) is not disturbed.  He rallies his Foot Soldiers and tells them that through harmony and patience, they shall destroy their enemies in battle.

Down in the basement, Splinter's four “sons” awaken.  They are four large, anthropomorphic turtles.  Splinter rallies them to their feet, as they shall help him restore his honor. 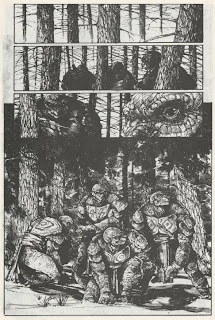 Several crows fly from the city to the snow-covered forests on the outskirts.  Splinter leads his sons through the snow, telling them that death only visits once.  Entering a clearing, they are ambushed by dozens of Foot Soldiers lurking in the snow.  As Shredder barks orders from a vantage point, the Foot Soldiers strike.  The Turtles hold their own in battle, slaying many of the Foot Soldiers.  Eventually, one of them has their right hand sliced off.  Feeling his son’s pain, Splinter vomits up the talismans.  He then orders his sons to save the hand and enter into retreat.  Shredder allows his enemies to leave, being satisfied with his victory over them.

Running through the forest, Splinter tells his sons to be quick with their fallen brother, as they are running out of time to not only save his hand, but his life, too. 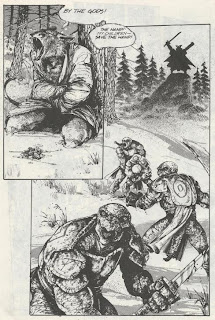 Having observed the battle, a crow swoops down and lands next to one of the disgorged talismans, covered in Splinter’s blood.

*When Splinter enters the astral plane to face Oroku Saki, he says “nin” (忍) which is Japanese for “endurance” and “concealment” in certain conjugations, as well as the first character in the word “ninja” (忍者).

The “guest era” of TMNT Vol. 1 is pretty polarizing amongst fans.  It wasn’t very well-received at the time it happened, as it delayed the actual narrative of TMNT Vol. 1 for YEARS.  When Eastman and Laird finally resumed “canon” stories in TMNT (Vol. 1) #45, they had to write up an editorial note assuring readers that the “guest era” was over for good.

Looking back, it was a very interesting experiment that I can appreciate on principle.  For years, indie creators were invited to write stories (sometimes one-shots, sometimes arcs) featuring completely new renditions of the Turtles.  The idea was to give readers variety in both art and storytelling whilst still maintaining familiarity in terms of characters.

That’s what was intended.  What we GOT was another matter entirely.

The “guest era” was practically consumed by surreal, zany, wacky comedy stories by screwball creators and artists.  Instead of “variety” we got Mark Martin or Hedden & McWeeney taking the Turtles on three-issue-long treks through the tediousness of “random” storytelling.  And still more were one-shot “surrealist comedy” bits of the same vibe.  If you’re actually attempting a #1 through #62 read-through of TMNT Vol. 1, then the “guest era” amounts to little more than an exercise in monotonous agony.  I can’t even imagine what it must have been like for the fans buying the book on a monthly basis back in the 80s and early 90s when this was going on.  “Is it over, yet?”  “Nope, it’s Hedden & McWeeney again”.  “Sigh.”

But while so much of the “guest era” was unbearable screwball comedy nonsense, there were some diamonds amongst the coal.  Rick Veitch’s contributions were worth keeping, but they were written to fit into the continuity of the ongoing Mirage series.  Likewise, so were many of the better issues, like “Halls of Lost Legends”, “Sons of the Silent Age” and “Dreams of Stone”.  Great stories, but they didn’t operate under the idea of a creator taking the Turtles away from established continuity and recreating them on their own.  THAT stuff was almost strictly reserved for the stupid comedy relief issues and arcs.

Then in step Michael Zulli and Steve Murphy with their “Souls Winter” trilogy.  Together, they proved to be the only creative minds invited to participate in the “guest era” who truly got what the exercise was all about.  Reinventing the series from the ground up, we get a fresh look at Splinter, Shredder, the Foot Clan and the Ninja Turtles under a lens of mysticism and spirituality as opposed to science fiction and contrived happenstance.

Here, the Turtles are created by Splinter using his own blood and his own soul.  They are truly his sons; his creations.  While his motivation for birthing them might be a little questionable, it’s no worse than his motivations in the main Mirage continuity (in both takes, he only raises them for the purpose of killing the Shredder; at least here he’s more honest about it).

Shredder, meanwhile, is much the same, though far more in touch with spiritual and psychic warfare than the strictly physical combatant he was in the Mirage continuity.  Often, the dichotomy between Splinter and Shredder is given that Shredder believes more in the might of hand-to-hand combat and strength, while Splinter is more a student of philosophy and spiritualism.  Murphy wisely chooses to cast the Shredder as something closer to Splinter’s darker half than his polar opposite, as both are masters of astral projection and psychic warfare.  It creates a more menacing Shredder, as the villain can now fight Splinter on both fronts (and over the course of this issue, defeats him on both fronts).

Murphy is subtle with his symbolism and his exposition in this issue.  This is the side of Murphy that I like to see, when he gives the audience enough credit to read into the message of his work, rather than having his work read its message to the audience out loud.  Sadly, you just don’t see enough of this sort of Stephen Murphy, as he mostly opts to go the soapbox route in his stories.  Regardless, he crafts a dark and brutal new origin for the Turtles that omits the campy superhero artifacts of the Eastman and Laird version (all the Turtles use katana, for instance, and none wear silly robber masks).  His use of the crows to symbolize the hovering presence of death, always following you and gradually drawing nearer, was a great touch of menace.  Of course, we’ll be meeting Death in a much less veiled form in the subsequent installments of the trilogy.

And what’s to be said about Michael Zulli’s art other than a righteous “Hell yeah”…?

The guy can DRAW and his renderings not only of the main cast, but of the grimy sewer depths, the dreary city skyline, the ominous winter forests and the menacing crows prove him to be one of the most well-rounded artists you will ever encounter.  The Puma Blues, while a bit of a dense read, is a great title if all you’re interested in is beautiful black and white artwork.  Zulli’s way of capturing nature is practically unparalleled.  He can put so much emotion into the face of an animal without cartoonishly anthropomorphisizing it.  His Turtles have scaly, bumpy skin and sharp, pronounced beaks which make them look ferocious from a distance, but close-ups show a warmth and wisdom in their eyes that’s really hard to describe.

“Souls Winter” is something very special.  While some good stories came out of TMNT Vol. 1’s “guest era”, I honestly think that Murphy and Zulli’s trilogy was the only one to utilize the freedom to its fullest potential.  If you plan on skipping the “guest era” in your collections, just make sure you don’t skip these.

Grade: A (as in, “And the Turtles wear loincloths!  Sweet, merciful loincloths!”)
Posted by TMNT Entity at 1:10 PM