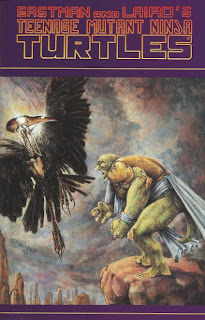 With their home in the abandoned building violated, Splinter orders his sons to carry their injured and unconscious brother out into the alley to search for a new sanctuary.  Suddenly, the spectral crow swoops down from the sky and enters the injured Turtle’s body in a flash of light.  Splinter recognizes the entity as an emissary sent by Animus.  Knowing that his son now houses a volatile force of nature, Splinter has no choice but to return to the basement of the building and wait to see what transpires. 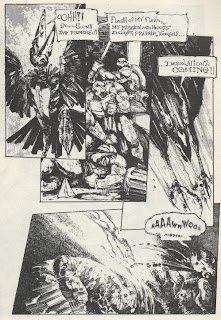 The injured Turtle finds himself alone in a strange wasteland, calling for his master.  He is greeted by the crow, who is known as Desolation.  Desolation tells the Turtle that he comes bearing a message from Animus: “Pick a species”.  With that, he blasts the Turtle with a bolt of energy. 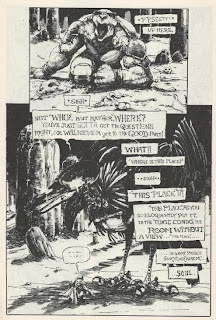 Inside the cave, he is once again greeted by Desolation.  Desolation gives him one final opportunity to make his choice: Man or Animal.  The Turtle ponders the choice for a moment and then delivers his answer: Life.  Desolation then blasts him with a bolt of energy and the Turtle falls silent. 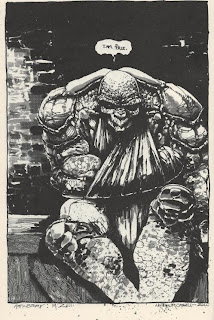 In the basement, the other Turtles are dropping flowers by the head of their unconscious brother.  The Turtle awakens and informs them that he is finally free.

*Other stories by Zulli in the “Souls Winter” universe include “A Splinter in the Eye of God” and “Failed Instant”.  “O-Deed”, despite being by Michael Zulli, is part of the Mirage continuity.

*The title “Souls End” does not appear anywhere in this issue.  The title is taken from the official Mirage Comics website.

*This issue also included an introduction by Rick Veitch.

Before now, the Turtles took a backseat to the conflict between Shredder and Splinter and felt like pawns in their own title.  Here, the unnamed Turtle who was injured in battle in the first installment takes center stage, fighting for the right to have a soul.

Zulli’s arc addresses the fact that the Turtles are unnatural abominations, neither animal nor man, and plots it out on a metaphysical plane.  The human world doesn’t want them and the natural world is just as disinterested; so where precisely do they fit in?  The circumstances of their origins in this universe are a tad confused; Splinter either creates them in the first issue or wakes them from a long hibernation.  Either way, there don’t appear to be any mutagen or baby turtles involved in their birth; and for that matter, we have no clue what happened to create Splinter.  For all intents and purposes, they aren’t “animals that became men” as in the Mirage universe, but were supernaturally forged creatures that have no firm foothold in either existence.

Animus, as is stated rather bluntly in this story, is displeased with such abominations existing at all and sends an emissary to make them “choose a side”.  That gives Zulli the opportunity to continue the theme of “Souls Winter” that was stated out loud by the Shredder in the previous issue; “all that bleeds is beautiful”.  Basically, it doesn’t matter which “side” they’re on; so long as they’re alive, they deserve to exist (and in this case, warrant possessing a soul).  They earn acceptance from the Shredder (who represents the forces of man) in the previous issue, and they earn the approval of Animus (who represents nature) in this concluding issue, effectively winning their right to exist from both sides.

It’s a shame we never got any extended continuations of the “Souls Winter” universe, as so much is left unsaid and unresolved.  Do the other three Turtles have to undergo spiritual trials to earn their souls, too?  Where did Splinter come from?  Why do he and Shredder hate each other?  If Animus is the god of nature, what is the god of man?

All answers we’re unlikely to ever hear, though there remains plenty to think about.

I’ve commented ad nauseum about how great Zulli’s art is, but with this issue, I’d really like to compliment his and Rob Caswell’s lettering.  Particularly for Desolation, the lettering just leaves the character dripping with personality; an especially impressive feat considering Desolation’s skull-headed design prohibits him from emoting.  His entire personality stems from his dialogue and the lettering that conveys it, and everything from the font type to the font size to the little details (tiny hearts around certain words) brings his voice to life.  There’s a manic, sinister sense of humor to the character as he drops colloquialisms and behaves so leisurely, but not in a way that makes him seem dated or silly.  He’s just weird and frightening and funny all at once.

“Souls Winter” leaves you wanting more, but still manages to tell a complete tale.  It’s a major departure from the Mirage universe, but familiar in so many ways.  If only more creators participating in the “guest era” had opted to reinvent the TMNT the way Zulli did, that experiment wouldn’t have turned out to be such a drag.

Grade: A (as in, “And if the ‘Coming Out of their Shells’ tour had been a metal concert, this issue would have made a great album cover”.)
Posted by TMNT Entity at 6:43 PM