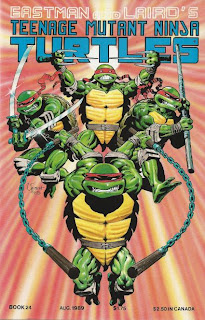 “Down to the River”

Out in a field near the farm in Northampton, the Turtles practice their lessons beneath the hot sun as Splinter watches and instructs.  Splinter hears the voice of nature all about him and probes his students to discern if they can hear it, too.  They cannot.  Seeing that the sun is taking its toll on them, Splinter ends practice for the day.  All the Turtles bow to their master, save Raphael, who runs away to cool off in the river.  Disappointed, Splinter tells the other three Turtles that they are not yet mature enough to learn more advanced lessons in ninjutsu.

Enraged that their callous and selfish brother has made them all look bad, Leo, Don and Mike chase after him.  They find Raph climbing a tree by the Connecticut River and demand that he come down and take his medicine.  The branch he’s standing on breaks and Raph plunges into the rocky water.  His brothers dive in after him, but while searching the river bed, Raph gets the drop on them and stomps their faces into the mud. 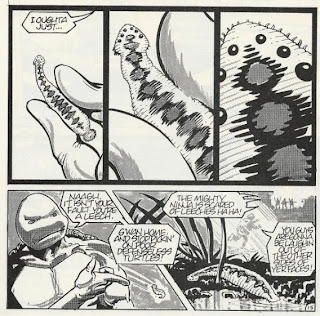 Now even more furious, the Turtles climb out of the water and prepare to pulverize Raph.  He successfully distracts them with the sight of a turtle nest where all the eggs have just hatched.  The Turtles are hypnotized by the sight of all the baby turtles swimming around.  Raph finds one that looks hurt and, upon closer inspection, sees that a leech is attached to it.  Raph recoils in horror, being afraid of leeches, and this revelation gives his brothers the chance to get even.  Holding him down, they place the leech on the bottom of his foot and let it get a few sips of blood.  Raph freaks out and pulls the leech off then chases his brothers back to the farm.

The next day, Splinter continues their lessons, but find that his pupils are no closer to hearing the voices of nature than before.  Listening, he feels a malignant presence in the nearby river, growing fat off of baby turtles.  Raph, pale and weak, collapses in the heat of the sun and Splinter calls off practice early.

Cooling off in the river, Leo, Don and Mike apologize to Raph for teasing him yesterday.  Raph reluctantly accepts the apology.  Suddenly, they spot a large snapping turtle get pulled under the way by a huge, slimy mass.  They chase the creature to a small cave with no exit and discover it to be a humongous leech.  Raph blocks the entrance to the cave with his shell while his brothers fetch their weapons to kill the thing. 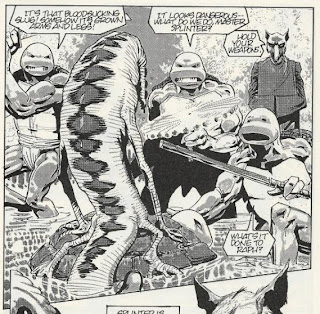 The Turtles return to find Raph passed out and the “bloodsucker” now not only larger, but standing erect with arms and legs.  Splinter, having accompanied his sons, recognizes something strange about the creature and tells them to stay back.  Leo, worried about Raph, ignores Splinter’s orders and chops the leech up.  Leo apologizes to Splinter, who tells his pupil that he needs to learn of other ways to solve problems than with his katana.

The next day, at practice, Raph seems dazed and unfocused.  He breaks formation at the sight of a dragonfly and chases it off into a field.  Splinter senses something is the matter with him, and over the next few days, the others begin to see it, too.  Raph gradually becomes more child-like in nature and loses intelligence, dexterity and focus.  Eventually, he begins to shrink in size and ceases speaking.

Splinter concludes that the leech siphoned off the mutagen in Raph’s system, absorbing it into itself.  As a result, the leech mutated into an anthropomorphic creature while Raph has begun to devolve into a normal turtle.  Together with April and Casey, they head to the river to try and find the remains of the leech and see if they can’t reclaim some of the mutagen and restore Raph.  They are suddenly accosted in the dead of night by a game warden who accuses them of fishing in a game preserve.  Seeing the quadrupedal Raphael, the game warden snatches him in a slimy hand, covered in tiny suckers and drinks more of Raph’s blood.  The game warden is revealed to be the mutated leech, now reformed from being chopped up, fully mutated and going by the name “Bloodsucker”. 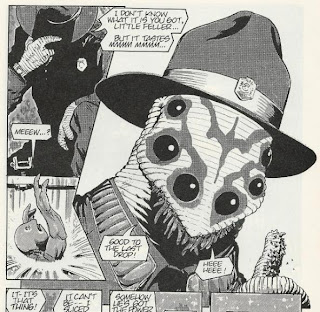 Bloodsucker escapes on a motorboat, which it stole from the real game warden (whom it devoured, thus gaining the ability to speak as well as other humanoid traits).  Donning their bandanas, Leo, Don and Mike begin their swim up river to catch Bloodsucker and bring him back to the farm.  April and Splinter stay behind to watch over Raph while Casey loads up his Chevy and promises to meet them at a rendezvous point upstream.

*The canonicity of Rick Veitch’s “The River” trilogy is somewhat confused.  Peter Laird has stated that all issues published during the Vol. 1 “guest era” are non-canon, with the lone exceptions being TMNT (Vol. 1) #27 and TMNT (Vol. 1) #28, as they were produced in-house by Mirage.  However, the events of this “non-canon” storyline are referenced in TMNT #28, a canon issue.  Make of it what you will.  Regardless of any editorial decrees on “canon”, there is nothing in this story to contradict the Mirage continuity.

Veitch’s “The River” trilogy defined the post “Return to New York” Northampton issues for me; whenever I’m reminded of that time period in Vol. 1, this is the story arc that immediately comes to mind.

It’s a very suspenseful tale, and I recall that when I originally read it, I legitimately felt worried that Raph “wasn’t going to make it”.  A silly thing, I know, but the circumstances of the publication probably helped elicit that reaction.  Coming out during the “guest era” where anything could happen, there was no guarantee that “The River” would align with Mirage continuity and there was always the chance that a main character might be at risk.  Of course, “The River” wound up functioning as a part of Mirage continuity until Veitch refused to sign the “mandatory retroactive work-for-hire” contracts and Laird struck this storyline from the record, but all that came after the fact.

The overarching plot of “The River” is a thrilling one, as Raph is left in a precarious situation and his brothers have to race to catch up with the villain that may be the key to saving him.  Not the most original set up when boiled down like that, sure, but one that nevertheless makes for an exciting story.  Being the first chapter in the trilogy, Veitch takes a very slow and deliberate approach to establishing the conflict, as Raph’s devolution takes several days and the characters, not wanting to accept that there’s something wrong with their friend, willfully ignore his decline until it looks them indisputably in the face.  While it may seem a little callous, I don’t think any of us can claim to have never reacted to a friend’s silent plight with denial.  It’s just one of those selfish things people do, sometimes, and somewhat understandable given how bizarre a malady it is; one the Turtles wouldn’t exactly know how to treat.

What can make Veitch’s “River” trilogy rather hard to read is his… less than firm grasp on the characters and their personalities.  None of the Turtles act very distinctly, particularly at the beginning of the issue, and you really can’t tell them apart unless they’re calling each other by name.  While Raph being a “rebel” is well-established, the way he brushes off practice and disrespects Splinter so he can goof-off and play around like a child with ADD is really more Michelangelo’s thing.  In fact, Raph’s and Mike’s personalities seem almost switched in this story.  When Raph begins to devolve, Mike is shown being an aggressive bully, taunting Raph to chase him out onto the roof of the farmhouse.  Raph’s dialogue seems out of character, too, as he sulks and accuses his brothers of being “mean” to him.  Again, that seemed more like a reaction Mike would have.

There’s also the narrative boxes, which exclusively refer to the Turtles as “friends” and never as “brothers”, which leaves me wondering if, at the time, Veitch was aware that they had a familial relationship (unlike in the Fred Wolf cartoon, where the Turtles were all indeed “friends” and not “family”).  Lavigne’s lettering is also filled with errors, repeating words or spelling some wrong.  Some campy elements also stick out awkwardly in the script, such as Splinter of all characters giving the villain the melodramatic name of “Bloodsucker”.

Despite those setbacks, I think “The River” is an overall excellent storyline that’s marred only by some indistinct characterization.  Veitch’s art is great stuff and the sequence where the game warden is revealed to be Bloodsucker is a nice bit of horror.  Though it is a little weird to see Splinter wearing culturally Chinese clothing rather than the Japanese robes he’s typically seen in.  I wonder if Veitch was aware of the difference at the time or if it was a mistake.

Grade: B (“But I always got the feeling that Wyrm was a variation of Bloodsucker, but altered just enough so Eastman and Laird wouldn’t have to pay Veitch any royalties”.)
Posted by TMNT Entity at 11:40 AM