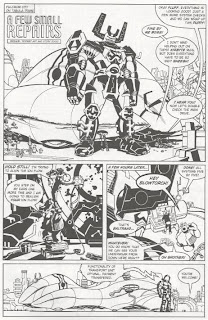 Fulcrum City on Tabula Prime.  After hours of work, Gizmo and Fluffy finish repairing a transport unit for a massive Kirbyte alien.  The Kirbyte transfers the funds into their account and Gizmo and Fluffy head out for some well-deserved lunch.  As Fluffy picks up some skump mellons from his old pal, Oskar, he’s bumped into by a pair of terrified children.

Fluffy asks what the matter is and the kids say that a mean man is after them.  Just then, a hulking brute brandishing a whip shows up, saying that the kids are runaway slaves.  Gizmo reminds the brute that slavery is illegal in the Commonwealth, but the brute doesn’t care, as the kids will net him 4,000 whatever the currency is.  Fluffy steps between the kids and the brute and says that he won’t let the kids be taken away.  Gizmo warns the kids to avert their eyes, as things are about to get ugly. 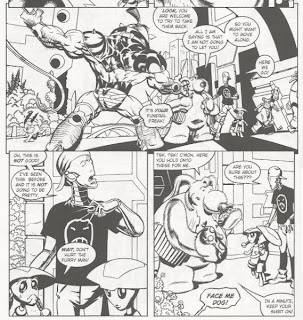 There’s a short fight and Fluffy handily (and violently) thrashes the slave-trader.  The kids introduce themselves as Elguay and Chystanna from Koshimo.  Gizmo promises to take the kids back to their village in ‘Soto, though Fluffy says it’ll have to wait until after lunch.  Gizmo warns the kids that they’d better listen to Fluffy, as they don’t want to see him when he’s mad.

*This is the first Gizmo story since “Sirensong” was published in 1992.  To date, it is the most recent.

*Michael Dooney has made the story available to read on his website under "Illustrations".

*In the opening editorial, Dooney says that he originally began a completely different Gizmo story, but it proved to go on too long for a back-up, so he shelved it in favor of this brisker adventure.  Dooney has yet to release the longer Gizmo comic, but I’m sure we all hope he does, someday!

This was such a pleasant surprise when cracking open TMNT #6.  Volume 4 wasn’t big on bonus strips (most “extra” stories were reserved for Tales of the TMNT Vol. 2), so when I say that seeing a Gizmo strip was surprise, I mean it was a BIG surprise.

To see Dooney resurrect Gizmo after ten years of silence was a shock, but perhaps the lesser shock was seeing that Dooney really hadn’t missed a beat after a whole decade.  “A Few Small Repairs” looks and feels like it stepped right out of the ‘80s with perhaps only the digital sharpness to betray its youth.  Really, it’s just another day in the life of Gizmo and Fluffy as they go about their paces, encountering adventures both large and small along the way, and it makes for a real nostalgia trip.

While the story is more than a little saccharine, it serves as a strong reminder after ten years of who these characters are and what their outlook is.  Fluffy’s a big tough bruiser, but a softy at heart, while Gizmo’s more of a “go with the flow” kind of guy and tends to keep his distance from the action when he can help it.  To date, it’s the latest in the Gizmo series and makes for a fascinating bookend with the first Gizmo short.  In that tale, Gizmo is a thief and scam artist on the run from the law.  Here, he’s a guy that does honest work for a day’s pay and helps out little kiddies when duty calls.  The character has really grown and developed a moral center, his “wild” days behind him, yet this hasn’t lessened his ability to find excitement.

The longer Gizmo story that Dooney mentions shelving in the opening editorial leaves me with a sense of hope that we haven’t seen the end of our hero; that when the urge hits him, Dooney might finish it up and release it to the public in some form or another.  With a grand total of 9 full-length issues and 8 shorts, the existing Gizmo library could easily fit into one omnibus trade paperback.  Perhaps someday such a thing might see a release and ignite enough interest in the character to see some new material hit the stands, too.  But whether or not we ever get more Gizmo stories, we’ll always have the twenty years of adventures Dooney has given us.  And I'm pretty sure that their fun, carefree mix of laidback humor and action will appeal to any generation of comic lovers.