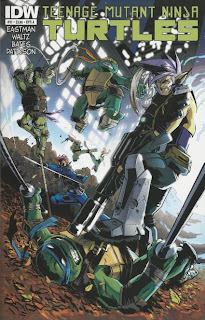 On the planet Neutrino, the capital city of Smada is under attack from Krang and his Rock Soldier forces.  King Zenter orders Commander Dask to take a commando unit to Earth and bring back Professor Honeycutt, as he’s the only one who can help them in the war against Krang.

In the lair beneath the old church, April helps Don with the power generator.  Observing his sons coping with recent events in their own separate ways, Splinter decides to call a family meeting.  Casey arrives with more fresh pizzas from Woody and joins in on the sitting.  Splinter tells all that he is proud of how they have handled their recent trials.  He reminds them that although their enemies rally together in groups, they are united only by avarice.  The seven of them, however, are a true family.  Casey asks if they have a game plan yet.  April offers a suggestion as to where they can start. 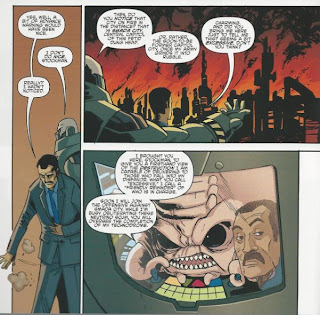 On the outskirts of Smada City, Krang, Tragg and a very discomforted Baxter Stockman teleport in.  Krang shows Stockman the destruction he is capable of wreaking against his enemies and reminds Stockman of his deadline involving the Technodrome.  Stockman says he’s gotten as far as he can, but needs assistance with the otherworldly tech that he isn’t equipped to handle.  Krang assures him that he is taking measures to capture the Fugitoid, who will help Stockman finish the Technodrome while he is away conquering Neutrino. 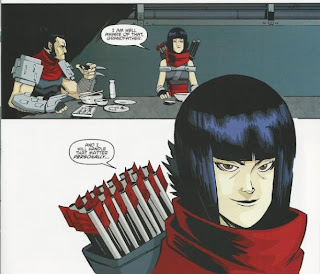 At Foot Clan HQ, Shredder asks Karai why she has not yet attempted to bring Leonardo to him (as he intends to make Leo his second in command).  Karai tells her grandfather that capturing Leo will require a very special team.  Shredder is aware of her plan but reminds her that she lacks the mutagen to make it happen.  Karai assures him that she has a solution for that.

It's past dark in Central Park and April and Chet are enjoying a cup of coffee on a bench.  April is glad that Chet agreed to meet her at such a weird time, though Chet seems nervous.  In the treetops, the Turtles and Casey keep guard.  Casey doesn’t trust Chet, but Leo reminds him that that’s why they’re there.  April tells Chet that he’s the only person from Stockgen whom she trusts and pleads with him to give her the lowdown on the company’s nefarious activities.  She reminds Chet of all the danger she’s endured because of Stockgen’s dealings; a reality that Chet is not proud of.  Chet tells April that he cannot reveal the truth to her, not because he doesn’t care if people get hurt, but because revealing the truth may cause even more trouble. 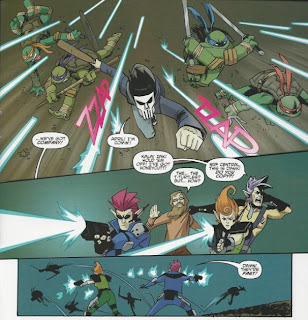 Suddenly, there’s a flash of light and the Neutrino Commandos (Dask, Zak and Kala) appear in the park.  Dask makes a move to apprehend Chet and the Turtles and Casey storm the scene.  A fight breaks out and Casey, fearing for April’s safety, pulls her out of harm’s way (even though she was holding her own).  Not wanting to be the cause of anymore violence, Chet agrees to go willingly with Dask.  Dask orders a teleportation, but the Turtles are caught in the radius.  They vanish, leaving April and Casey to wonder where they might have gone.

On the planet Neutrino, the Turtles find themselves in the middle of a battle between the Neutrino resistance and the Rock Soldiers, having no idea what’s going on.

*This story is continued from TMNT Microseries #8: Fugitoid.  The story continues in TMNT (IDW) #18.

*Despite their similarity in appearance, these are not the same Neutrinos who previously appeared in TMNT (IDW) #14.

*Chet’s identity as the Fugitoid was revealed in TMNTMicroseries #8: Fugitoid.

*This issue was originally published with 3 variant covers: Cover A by Ben Bates, Cover B by Eastman and Pattison, and Cover RI by Andy Kuhn.

Dammit, Tom Waltz.  If you turn me into a fan of the Neutrinos, I will never forgive you.

So this is it: The beginning of the Krang War.  The arc I’ve been fidgeting in anticipation for since Krang first clenched his mighty fist in TMNT (IDW) #1.  To my absolute awe, not only is it a delightful throwback to the Fred Wolf animated series, but a loose adaptation of the first outer space arc from Mirage’s TMNT Vol. 1, right down to the Turtles getting teleported across the galaxy by accident!  When Waltz borrows from the TMNT mythology, he sure doesn’t half-ass it.

Reinventing the Neutrinos as a trio of badass commandos might seem ridiculous (these were the “hotrodding teenagers” that spoke in beatnik lingo, after all), I can’t help but feel there’s a definite lampshade on the whole idea, too.  Dask, Zak and Kala look *exactly* as they did in the ‘80s cartoon, albeit with some sunglasses and body armor, and the idea is so absurd I get the feeling the comic is laughing right alongside us.

Karai’s decision to use the mutagen to aid her in her conquest of Leonardo (shut up, fangirls) leads me to think, and hope, that we’ll finally get to see Bebop and Rocksteady go mutant as was hinted way back in the Raphael microseries.  With Old Hob seemingly planning to start his own mutant gang and the Foot looking into creating more mutant henchmen, it looks like this book will have no shortage of mutant baddies for the Turtles to face.  I’m fine with that.  I know some folks hate the “mutant of the week” approach, or feel that having other mutants diminishes what makes the TMNT “special”, but I couldn’t disagree more.  If TMNT Adventures taught me anything, it’s that no glut of mutant characters, good or evil, somehow lessen the value of the Turtles.  And, in fact, many of those characters are really interesting.  IDW hasn’t shied away from using other mutants since the book began and that’s one of my favorite things about it.

Ben Bates takes on art duties starting… NOW!  I’d gotten to see much of his work before now in the pages of Archie’s Sonic the Hedgehog and Mega Man.  He’s done great work on both titles, though when he was announced as Kuhn’s replacement on TMNT, I was curious.  Mega Man employs a cute style where the characters aren’t necessarily “super deformed”, but definitely squat and bug-eyed.  Sonic, meanwhile, is a funny animal book and much of Bates’s work on that required him to ape the “house style” modeled after Tracey Yardley’s work.  Are Bates's pencils up to the task of handling a more “action adventure” oriented title that doesn’t utilize midget people or creepy furry bait?

The answer is yes.  Like Duncan and Kuhn before him, Bates utilizes a more economical take on the characters and layouts, but such a priority has gotten IDW’s TMNT out on time every month since it started.  So I’m A-OK with that.  His layouts flow nicely and he has perspective and scale down pat (two things that both Duncan and Kuhn faltered on from time to time).  It’s hard to judge him on action this early, as we only had 3 pages of it in this issue, but man, that panel where April elbow-slams Dask in the spine?  Great stuff.  And I want to see so much more of his smug, scheming Karai.  He really nailed her expressions.  As for his Turtles, their heads are maybe a bit too oval-shaped, but otherwise they looks perfectly fine to me.  They’re not rockin’ the boat and they may not go down in history for redefining the designs, but they’re expressive and attractive and Bates is the first regular artist on the ongoing NOT to give them massive overbites.  ‘Tis a blessing.

Also of note is that in the letters page, editor Bobby Curnow says that he, Waltz and Erik Burnham have been in talks over a potential Ghostbusters crossover.  They say now’s not the time, but they’re spitballing ideas.  I’ll just say that, as a dual fan of both the Ninja Turtles and Ghostbusters, I would react to such a crossover with grace, dignity and a reserved enthusiasm betrayed only by the most approving of golf-claps.

Just kidding.  I would lose my freakin’ mind.

Grade: A- (as in, “At the start of the issue, I thought for a second Waltz was going to sow seeds of the Donatello/April romance from the current Nickelodeon cartoon.  Whew, dodged that bullet”.)
Posted by TMNT Entity at 7:33 PM