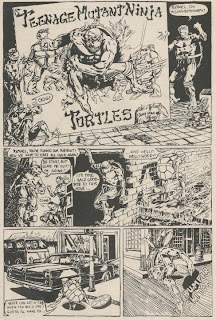 Down in the sewer lair, Raphael callously bursts through a portrait his brothers are painting.  As they yell at him, he says that he’s off for Hollywood to become a big star.  Catching a ride on the bumper of a car, he arrives at JFK and snakes aboard an airplane via the landing gear.

A week later, the Turtles lament Raph’s absence during a poker game.  Raph, meanwhile, is living it up on the beaches of Hollywood, surrounded by several naïve blondes.  He tells them that he is a Testudon alien that has come to Earth to save humanity from the Prodigian shape-changers.  In fact, he’s making a movie about it right now in order to warn the world of the alien threat!  Raph’s agent, Monty, then swings by and picks him up for a ride to the studio.  Monty shows Raph a piece of concept art for the Prodigian villains (shapely alien women) which the art department created to his precise specifications.  As Monty and Raph drive off, the two blondes transform into Prodigian alien women.  They are disturbed that a Testudon is on Earth and even more disturbed that he suspects their invasion.  They decide to accelerate their plans.

During the ride, Raph recalls how when he first arrived in Hollywood, he couldn’t get a job because mutants were passé.  He then saw a photo of an anthropomorphic turtle in a newspaper, labeled an “alien”, and decided to use that as a basis for his invasion cover (which landed him a gig with Monty).

Monty and Raph arrive at the studio and find a horde of Prodigians battling a horde of Testudons on the set.  Monty tells Raph that the invasion has begun before they could make their movie, while Raph is just shocked that his whole phony story was true.  Raph pulls Monty from the path of a Prodigian laser tank and both pile into Monty’s car.  Raph drives the car full-speed into the tank, exploding both vehicles (and killing Monty).  Still on fire, Raph battles the remaining Prodigians and takes them all down.

The fight over and the Prodigians captured, the Captain of the Testudons thanks Raphael and escorts him back to their spaceship.  The Captain explains that the Testudons and the Prodigians have been waging war for all of recorded history.  The Prodigians were exiled to Earth in the form of a penal colony, but when the Testudon’s registered anthropomorphic terrapin life similar to their own on the planet, they came back to remove the Prodigians before they could take over.  Raph asks how he could have known the whole story when he pitched his script to Monty and the Captain says some bullshit about residual psychic energy, I dunno.

Suddenly, the producer starts shaking his fist at the spaceship, demanding reimbursement for the damage done to his studio.  The Testudons then flee and drop Raph off in New York on their way home.  They invite Raph to come live with them on their homeworld, but Raph declines.

*To my knowledge, this story has never been reprinted.

The first volume of Turtle Soup was sort of a springboard for many amateur indie comics creators looking to put something eye-catching on their resume’.  I should stress the word “amateur” because man, some of these guys wouldn’t be able to hack it on DeviantArt, these days.

John Dowling’s cleverly titled “Teenage Mutant Ninja Turtles” would be one of those stories; a rather homely nine pages of meandering plot and something that may or may not qualify as humor.  I honestly can’t tell if Dowling was making a concerted attempt at being funny or not, as all the pieces necessary for a comedy are all present but there’s no visible effort made to assemble them.

As a gag short, Dowling’s comic might have been, I dunno, amusing (I’m hesitant to insist it would have been a genuine rib-tickler), but every aspect of the tale is delivered so deadpan and matter-of-factly that it seems like it wants to be a “serious” adventure, too.  The idea that Raph would make up a story about being an alien then find out that said story was true might've made for some zany antics, yet Dowling strains himself to provide an answer for everything during the epilogue (even how Raph came up with the idea).  This only serves to drain the silliness from the whole thing like a guy who ruins a joke by explaining it to you.  Hence my confusion as to whether this was even meant to be “funny” or not.

The only part that made me laugh was when Raph saved Monty from the laser tank, tells him to get in the car, then drives the car into the tank, killing Monty instantly and making his whole rescue pointless.  Then Raph says, “That was stupid.  Now Monty is dead and I never was fireproof!”  Come to think of it, perhaps Dowling was writing comedy on a dimension I’m simply not equipped to comprehend.

The pencils are pretty dire and the inking only serves to make the outlines look worse.  Raph’s montage where he battles the Prodigians looks like something you’d see in a teenager’s notebook.  The hand-lettering might be the worst offender of the whole ordeal, as there’s little consistency to the style, the flow of the bubbles jumble up the order of the conversations, the sentences are constantly slanted or just poorly leveled and words scrunch and stretch in order to save or take up space in the panel.

I mean, if this had been some kid's fan comic that he Xeroxed and passed around his high school, it would be really impressive.  But it wasn’t.

Grade: M (as in, “Michael Bay apparently read this story and only this story when conceiving of his TMNT movie for Platinum Dunes”.)