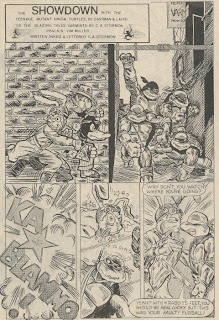 As the Turtles and the Varmints (Lucky the Rabbiteer, Ninja Duck and Nails the hamster detective) both round the same corner, Leonardo and Lucky smack headfirst into each other.  Neither leader is willing to admit fault and both demand satisfaction for the slight.  Both groups fight, but prove equally matched in battle.  Leonardo comes up with a solution of his own; he’ll act as ref while his brothers and the Varmints compete in a rooftop relay race. 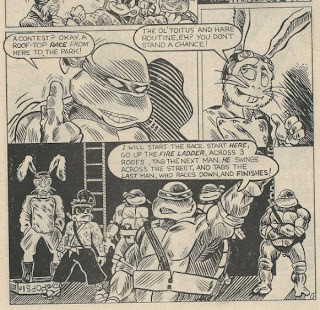 Mike and Nails are first off the line and scale the nearest building via the fire escape.  They leap off the first roof and onto the second, but come in too fast and crash into the next members of the relay.

Ninja Duck and Raphael recover at the same time and each take swinging lines over to the third building.  Unfortunately, their lines get tangled and both slam face-first into a brick wall.

Eventually, they tag Lucky and Donatello, who race across the roof and leap down into the alley where the finish line awaits.  They smash into craters in the concrete.  Leonardo declares the race a tie, but Nails insists that Lucky was first.

Ninja Duck says he has an ancient Japanese tiebreaker and produces the Jewel of Solutions from Ti-Quack.  The jewel zaps them with an “aura-monster” that puts both groups into a deep trance.  By the time the jewel finishes working its magic, both groups have completely forgotten about the encounter and wander off their separate ways.

*The Blazing Tales Varmints appeared, from what I can dig up online, in barely a handful of other comics: Varmints #1, Varmints Special #1, and back-up strips in L.I.F.E. Brigade #1 and #2, all published by Blue Comet Press in 1987.

*To my knowledge, this story has never been republished.

So who the hell are these guys?

There was a time in the ‘80s when I don’t think Eastman and Laird had the heart to turn down any crossover proposal no matter how obscure the characters were (how else did someone like Panda Khan end up with an action figure in the Playmates toyline?).  I’ve googled ‘til I can’ts google no more and have thus far failed to find any further info about the Varmints save the cover of Varmints #1.  There were a lot of black and white, anthropomorphic animal indie comics sprouting like weeds in the wake of the TMNT’s success, and most lasted about as long as C.A. Stormon’s creations and with about as much notoriety, too.  Hell, it took me an hour to find the names for the hamster and the duck.  Has anybody read these comics?

“Showdown” is about what you’d expect.  It’s a pretty amateurish bit of art and storytelling, but with the added amusement of Craig Stormon assuring readers that his Varmints are the total equals to the Ninja Turtles in every conceivable way (and maybe even a shade superior, if Lucky did indeed finish before Don).  That takes some ego.

The only notable thing about this comic is that it’s sandwiched between an awesome Raphael pin-up by Jim Lawson and an awesome TMNT/Metallica pin-up by Ryan Brown.

Grade: F (as in, “For a fleeting instant, I thought this was going to be a crossover with Bucky O’Hare and almost felt exhilarated.  Alas…”)