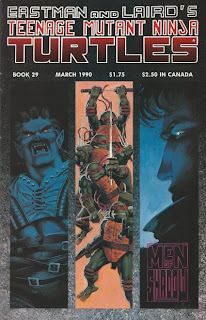 In a secret location, a dark man enters a log into his computer, waxing over his desire to be a true hero someday.  As he types, a batwinged eyeball spies on him.  He blasts it away with a gun.

In the woods of Northampton, Splinter looks on as Leo, Mike and Raph battle a lumbering turtle-mech.  Their attempts to trip it up prove futile and the turtle-mech takes the upper hand… at least until it has a systems breakdown and falls over.  Don climbs out of the cockpit and is pleased with all the salvage he’s gotten from the “U.S. Robots and Mechanical Men” company.

Over in nearby Arkham, two kids (Max and Pervis) exit a comic shop with a first printing of Dark Knight Returns #1.  They’re approached by Barry and his gang, who snatch up their comic, tear it in half and then hightail it before a cop arrives.  Pervis is willing to take the bullying on the chin, but Max is upset.

At the University of Massachusetts, a SWAT team gathers around the Whatley House, recently transplanted from Arkham and renovated into a curio museum.  The unknown assailants within have taken two hostages: April and Casey.  Hearing this over the radio, the Turtles and Splinter pile into their pick-up truck (with the turtle-mech in the bed) and head to the Whatley House. 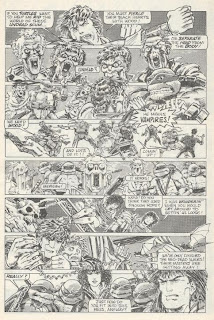 Inside, the vampire Lord Mallet forces an undead slave to arm an explosive with a “deadman switch” (depressing the button will cause it to blow).  Lord Mallet radios his cohort, Wolf, who is parked in a nearby van labeled “Innsmouth Seafood” and tells him that, no matter what, the artifact must be delivered to Master Traquer.  The Turtles invade the Whatley House and demand that Mallet release April and Casey.  Suddenly, the dark man sneaks up behind Mallet and relieves him of his gun.  The Turtles use the distraction to untie April and Casey and take on the vampires.  The dark man tells them that they have to pierce their hearts with wooden stakes to kill them and the Turtles comply.  Mallet and his goons transform into bats and escape as the zombie with the switch prepares to blow the explosive.  The dark man grabs the zombie and flies out the window and up into the air where he’s caught in the explosion.  The Innsmouth Seafood van tears away from the building and, sensing they’re involved, Don tags it with a tracking shuriken.  April offers to stay behind and appease the cops while the Turtles, Splinter and Casey follow the van in their pick-up truck.

In a deserted field, Max is whining to Pervis when an object crash-lands in front of them.  It’s the dark man, smoking and injured from the explosion.  Max helps the dark man up while Pervis heads to town for help.  The dark man, saying that his antigravity flightsuit has been damaged, tells Max to help him to his bunker.  Max helps the dark man through the woods and into a secret underground base.  The dark man climbs inside a pod to recuperate and tells Max not to touch anything.  Max immediately logs into his computer and reads his latest log entry.  Apparently, the dark man is named Clark Ashton Allard and he’s the nemesis of the vampire Master Traquer.  Traquer is after a certain artifact from the Whatley House which he and his followers can use to open a dimensional gateway.

On the outskirts of Arkham, Casey’s pick-up truck has broken down thanks to the excess weight.  The Turtles wonder what they’re going to do for a ride and Casey makes a unique suggestion.

Back in the bunker, Max is startled when Master Traquer and his vampires invade (having located the bunker with their spy-bats).  Traquer’s goons pull the unconscious Allard out of his pod while Traquer nabs Max.  He decides to take them both back to Innsmouth so they can share in the horror he is about to unleash. 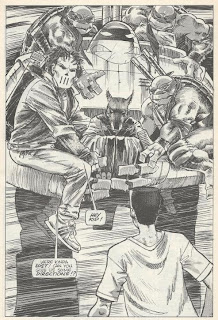 Meanwhile, Pervis is on his way toward town when he bumps into the Turtles, Splinter and Casey… all riding in the turtle-mech.  Casey says they’re lost and need directions to Innsmouth.

Inside a warehouse located on an Innsmouth pier, the local fish-people use the artifact Traquer procured to summon their master, Dagon, from the outer regions.  Allard (tied up next to Max) warns Traquer that all vampires will be destroyed in Dagon’s wake, too.  Traquer informs him that if vampires can’t control the world, then he’s happy to see it destroyed.  Suddenly, the turtle-mech smashes through the wall and the Turtles, Splinter and Casey attack the masses.  Casey confronts Traquer and breaks his bat over the vampire’s head.  Unfazed, Traquer is about to do Casey in when Max (freed in the chaos), picks up the splintered bat and stakes Traquer through the heart. 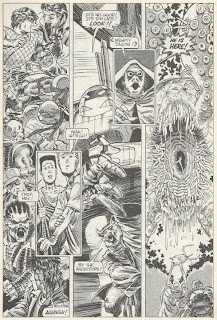 Their battle is all for naught, though, as the Innsmouth mystics successfully summon the massive creature Dagon.  Allard grabs the artifact and attempts to reconfigure it to send Dagon back.  As Dagon seizes Allard in a slimy tentacle, he tells the Turtles to flee before the artifact sucks everything back through the gateway.  The heroes escape the warehouse just before it explodes.  There is no trace of Allard in the aftermath.

Epilogue:  Back in the city, Max and Pervis are once again confronted by Barry and his gang.  No longer a push over, Max tells Barry off.  Barry proceeds to give Max a black eye and laugh in his face.  At a payphone, Casey calls April and tells her that they’ve gotten the truck fixed and are on their way home.  And in a secret bunker, Allard recuperates in his pod.

*Aside from that editorial mandate, however, there is nothing in this story to contradict Mirage canon.  So, you know, make up your own mind about it.

*This issue also contained a “The Turtles go to Egypt” preview pin-up by Mark Bode’.

One of my all-time favorite Turtle artists, A.C. Farley, makes his full-issue debut.  Much like another favorite of mine, Eric Talbot, Farley’s contributions to the Mirage TMNT series were fairly limited, only providing full pencils for a couple of issues and limiting himself mostly to covers, pin-ups and even sculptures (he’s an artist of many talents).  So as with Talbot, a full issue by Farley is nothing short of a rare treat and is definitely to be savored.

As stated in his opening editorial, and made pretty obvious in the story-itself, “Men of Shadow” is packed with references to the works of famous horror and science fiction authors such as Heinlein, Asimov, Stoker and, most abundantly, Lovecraft.  In fact, the Lovecraft references are so dense, the narrative is almost impenetrable without a working knowledge of the Cthulhu Mythos.  What’s so special about the Whatley House?  You’ll need to read “The Dunwich Horror” to figure that out.  Why are all the locals of Innsmouth fish-people?  That’s covered in “The Shadow Over Innsmouth”.  Having read Lovecraft’s complete works many times over, I was able to go with the flow rather naturally, but I can see how this story would be confusing for someone unacquainted with the literature.  Of course, in the opening editorial, Farley says that his intention was to inspire readers to check out the authors he took concepts from and expand their horizons.

That aside, “Men of Shadow” reads less like a Turtles story and more like a pilot for a Clark Ashton Allard ongoing series.  He’s really the focus of this tale, with his own arch enemies and secret headquarters and high tech equipment and years of adventuring all presented matter-of-factly (even if this is the first time any of us have heard of them).  Quite frankly, the intention is more than a little transparent and the characters introduced are pretty shallow and uninteresting; I’d much rather be reading about the Turtles fighting Dagon than some hackneyed “badass” that just came out of nowhere.

I didn’t really get why the kids needed to be included in the story, either (aside from referencing a trope of Heinlein's).  They don’t really offer anything to the plot other than an opportunity for exposition via Allard’s computer log.  At a glance it might be to establish a “stand up for yourself” moral at the end, but that falls flat on its face as Barry beats Max up and leaves him worse off than he was beforehand.  So is the lesson, “don’t stand up for yourself”?  Or perhaps, “pick your battles, kid”?

So, admittedly, the story in “Men of Shadow” isn’t so hot.  What makes this one of the better issues during the “guest era” at Mirage is the full length art by A.C. Farley, who is a serious contender for my favorite Turtle artist.  He brings a “fine art” approach to the Turtles that’s something of a fusion of Talbot’s and Dooney’s aesthetics (Farley is a spectacular painter, as evidenced in his many trade paperback covers), balancing lavish inks and tones with a menacing, quasi-horror movie touch.  While his facial detailing does have the effect of making the Teenage Mutant Ninja Turtles look like the Middle-Aged Mutant Ninja Turtles, I find his more steeled and ferocious take on their countenances to be a refreshing change of pace from the cartoonishly over-expressive variety.

“Men of Shadow” amounts to some amazing art complimenting a mediocre story.  It probably could have used some more polish in the scripting stage; eliminate the useless kids and maybe downplay the “pilot” aspect for an Allard ongoing.  Regardless, it’s a lot of fun to read if you’re acquainted with the plentiful literary references and enjoy picking them out, and of course, the art is damn pleasing.

Grade: B- (as in, “But I love the bit where all the Turtles are complaining about the ride in the turtle-mech, and Splinter is just sitting there quietly and comfortable”.)
Posted by TMNT Entity at 1:47 PM