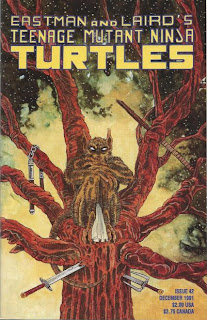 Some time ago, a man in black approaches the cryptozoologist Dr. Charles Forté.  He offers Dr. Forté a collection of photos proving the existence of anthropomorphic turtles in Northampton.  He also offers photos of cryptids and other associates known to have been in contact with the turtles: a Foot Soldier, an Utrom, the Rat King (labeled “unknown”), a Triceraton, Leatherhead and Complete Carnage.  Eager to study the turtles and prove the usefulness of cryptozoology to the world, Dr. Forté agrees to help hunt them down.  The man in black is revealed to be none other than Edgar Allen Poe, though Dr. Forté fails to recognize him as he reads very little literature. 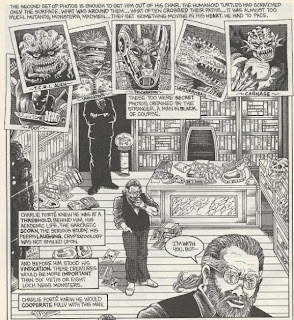 At present, April and Casey have been taken hostage by Poe and Forté.  They are administered truth serum and forced to reveal the whereabouts of the Ninja Turtles.  Once they’ve reluctantly told all that they know, they’re given an amnesiac and knocked out.

At the farmhouse, the Turtles notice that April and Casey are late coming home from the grocery store and decide to go out looking for them.  Along the side of the road they find Casey’s discarded hockey mask and golf bag.  Even worse, they find his Chevy completely crashed and signs of a struggle.  Leo orders his brothers to split up and find where April and Casey have been taken.

Searching a field, Raphael is suddenly approached by a large Texan.  The man introduces himself as Robert E. Howard, a friend of H.P. Lovecraft’s.  Before Raph can do anything, Howard hits him with a bolt of energy from his fingers and knocks him out.  Mikey is searching the woods when he’s attacked from behind by none other than Bruce Lee.  Lee’s skills with a nunchaku trump Michelangelo’s and the Turtle is beaten unconscious.  In a corn field, Donatello attempts to hone his senses and discern what direction his friends were taken.  He’s distracted by the ravishing vision of Mae West, who knocks him out with a hypnotic kiss.  Finally, Leonardo is busy searching the back roads when he’s approached by his namesake, Leonardo Da Vinci.  Da Vinci paints a symbol onto Leo’s chest that knocks him out.  Da Vinci wishes he had the opportunity to paint a portrait of his victim.

On top of a skyscraper somewhere, a wealthy and beautiful woman walks through her bizarre garden.  She ponders that she long ago gave up on seeking revenge against the ones who wronged her centuries ago, but is never-the-less pleased to find the four warriors she needs to complete her spell are, in fact, the very culprits she’s so hated.

Back at Northampton, Splinter meditates in a tree where he’s approached by Poe.  Poe apologizes for not being strong-enough to resist the orders given to him by his mistress.  His friend Lovecraft was able to resist, but was thrown into R’Lyeh for his insubordination.  Seeing that a battle of great importance is about to go down, Splinter goes with Poe willingly.

April and Casey come to on the side of the road by the wrecked Chevy.  With only vague memories of what happened, they see tracks left by the Turtles in the mud and (Casey grabbing his mask and gear) decide to follow them.

At a barn in the middle of nowhere, the Turtles and Splinter have been strung up by their feet.  Dr. Forté inspects them, considering them to be his property and his key to fame and fortune.  The woman, a sorceress, appears with Poe in a cloud of smoke and completes drawing various runes and symbols on the floor.  She wakes the Turtles and tells them that she is sick and tired of the loneliness of immortality.  By sacrificing them to complete her spell (that has taken 300 years to translate and prepare), she will be granted control of time-itself.  Poe attempts to stop her, but she disintegrates him where he stands.

Outside, April and Casey find the barn and sneak in.  Casey goes up through the rafters while April crawls in through the door. 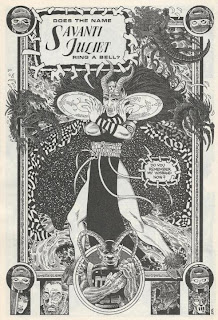 The Turtles demand to know who the sorceress is and she tells them that she was married to a great man, another immortal sorcerer like herself.  The Turtles and an “earth pig”, however, killed her husband and left her to wander the centuries alone.  She then discards her disguise and reveals herself to be Savanti Juliet, the widow of Savanti Romero.  Juliet then cuts each Turtle and Splinter and uses their blood to paint a symbol onto Forté.  Forté argues that she’s breaking their contract, as he was guaranteed the Turtles for study.  Juliet laughs and tells him that a necessary ingredient for the spell was “a dupe”.

Juliet begins casting the spell, but before she can finish, Casey cuts the Turtles and Splinter loose from the rafters.  April, meanwhile, smudges the symbols on the floor, ruining the incantation.  Enraged, Juliet bursts into flames and unleashes a horde of goblins on the heroes.  She attempts to complete the spell anyway, as the Turtles, Splinter, April and Casey are overcome by the goblin hordes.  Suddenly, a bolt of energy beams down from the sky and detonates the barn.  Forté is sent screaming from the explosion, insane and on fire.  Meanwhile, Juliet is met by a beautiful woman.  Juliet recognizes her as one of the culprits who killed her husband and the two clash.  The beautiful woman vanquishes Juliet, who disintegrates. 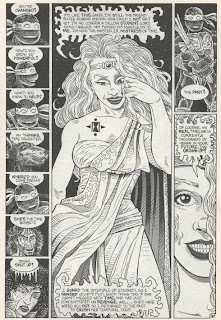 The Turtles, Splinter, April and Casey find themselves safely teleported to a field.  The beautiful woman approaches them casually and they wonder if they’ve ever met her.  She reintroduces herself as Renet, now all grown up.  Lord Simultaneous has retired and made her Mistress of Time.  She could feel Juliet’s magic disrupting the timestream and came to stop it (as well as save her friends).  Renet heals all their wounds and reluctantly departs, as she detects another time infraction elsewhere that requires her attention.  With the battle won, everyone decides to head home and finally get something to eat.

Two nights later, a pair of lovers are getting it on in the woods.  Suddenly, they’re startled by a hairy, disfigured creature roaming the forest, screaming “They’re mine” over and over.  The encounter will be reported as just another Bigfoot sighting, but in reality, the creature is Dr. Forté.

*Juliet refers to the events of TMNT (Vol. 1) #8 as the defeat that took Romero from her.  The Turtles have since battled Romero again in Tales of the TMNT (Vol. 1) #7 and “Spinal Tapped”.

*Savanti Romero will be shown to have survived his last encounter with the Turtles in TMNT (Vol. 1) #47.

*During the goblin battle, Donatello is said to feel “close to the Great Turtle”.  He and his brothers met the Great Turtle (AKA the Father of All Reptiles) in TMNT (Vol. 1) #37.

*From Renet’s POV, this is actually one of the last stories in her timeline, as she’ll appear much younger in her subsequent appearances.  She'll appear again in TMNT (Vol. 1) #46.

*According to Peter Laird, all issues published between TMNT (Vol. 1) #21 and TMNT (Vol. 1) #45, with the exceptions of TMNT #27 and TMNT #28, are considered non-canon.  However, there is nothing in this story to contradict Mirage continuity.  So make up your own mind if it “counts” or not.

McCollum and Anderson’s last contribution to the TMNT is one of their best, forgoing all the metaphysical pondering about spiritual kinships and instead just being a rollicking battle against the widow of an old foe.  It’s a nice break from their usual style, but still offers plenty of weird and interesting concepts on its own.

“Juliet’s Revenge” includes a number of continuity callbacks, back before the stories of the “guest era” were dubbed non-canon by Mirage editorial.  As such, it fits into the tapestry of the Volume 1 ongoing storyline really well.  There are references to the many weird entities the Turtles have encountered and even the ongoing saga of Casey’s infatuation with his Chevy (first established in TMNT #30).  It creates an interesting contradiction with the tone of the opening editorial by Eastman and Laird, who vow to reestablish the original continuity with TMNT#45.  Huh.

When it comes to Savant Romero stories, I’ve mentioned this before, but he’s not really a very… competent villain.  He’s played almost exclusively for laughs, and that’s one of the reasons I really like him, but it does sort of neuter his threat level.  Savanti Juliet proves to be a more serious challenge than her late husband ever was and the story is played straight with no pretenses of humor.  As such, she makes for a worthy foe and nearly wins the day until…

Sigh.  If there’s one thing I’ve noticed, it’s that nearly all Savanti Romero (or in this case, Juliet) stories end the same fucking way.  Romero/Juliet is about the be victorious until the very last minute when Lord Simultaneous/Renet appears and handily defeats him/her.  Usually with a blast of energy that leaves their fate up in the air in case a writer wants to use them again.  You’ll encounter this formula time and again with the Romero stories; those that avoid it are in the minority.  Really, that tired old resolution is my only major grievance with the issue.

One of my favorite aspects in regards to the artwork in "Juliet's Revenge" is the way McCollum and Anderson add text and additional detailing to the borders of certain images.  When Poe is revealed, his panel is bordered with the titles of his many stories while Savanti Juliet’s and Renet’s pin-up pages are decorated in a glorious art nouveau style.  The goblin battle adds some great, hectic action to the story and the horrific, bizarre designs for the little things are really creative.  A part of me wonders if Juliet unleashing a horde of goblins was perhaps influenced by the Goblin Queen of the “Inferno” arc that had wrapped up in Marvel’s X-Men book just a couple years before this issue.  Probably just a coincidence.

“Juliet’s Revenge” is another one of my favorite one-shots from the Volume 1 guest era and one that immediately springs to mind when I think about that time in the book.  If you’re a fan of Savanti Romero then this is a must, even if the ending is a bit cliché.  And I love the ironic comeuppance for Forté during the epilogue.  Like something out of Tales from the Crypt.