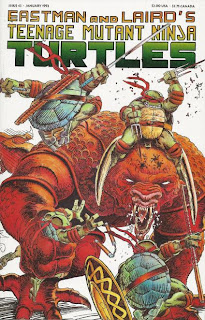 Out in the forests of Northampton, the Turtles are working on another one of Splinter’s elaborate exercises.  In this case, he sent them each out into the wilderness blindfolded to expand their senses and intuitive abilities.  Donatello is having particular trouble with this exercise, failing to see the point in the whole endeavor.  His brothers tell him to focus, as his goofing around is ruining it for all of them.  Suddenly, Don bumps into what feels like a brick wall.  He removes his blindfold and finds that he’s standing outside of a vast city of varying architectures with a huge tower in the center.  The other Turtles take off their blindfolds and see it, too.  They decide to venture inside and explore the massive tower. 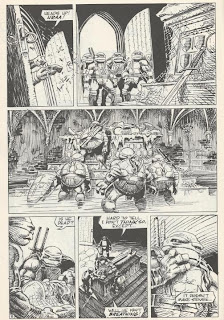 Inside, they find endless, uninhabited hallways lined with locked doors.  They manage to break into one labeled “Aurora” and find an armored knight laying on a dais.  Leonardo takes a look at him and finds that the knight is still alive, but he isn’t breathing.  Just then, a man walks by the door and the Turtles rush to speak with him.

The young man introduces himself as Locke and tells the Turtles that they’re “early”.  He tells them that they have come to the Halls of Lost Legends in the land of All Creation.  Apparently, when mankind first created mythology and religion, their belief brought the creatures of legend to life.  They then took up residence in All Creation until mankind’s belief in them disintegrated.  Once that happened, the figures of myth were turned to “statues” and placed in the Halls of Lost Legends, where Locke acts as curator.  Locke warns the Turtles to leave, as they don’t belong in the Halls yet and their presence could create a great disturbance.  Don isn’t buying the story and runs off to find the truth behind the “illusion”.  The other Turtles continue exploring together, despite Locke’s warning. 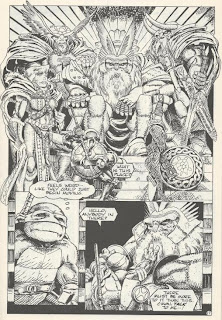 Donatello comes to a room labeled “Asgard” and forces open the door.  He sees Odin sitting on a throne, motionless.  Don’s attention is drawn to a shield with a turtle symbol in the center.  Looking into the reflection of the shield’s polished surface, he can see that Odin is actually weeping.

Elsewhere, the Turtles enter the door labeled “Cronus”.  The titular Titan then slams the door shut behind them and, thinking that the Turtles are more of his wayward offspring out for revenge, vows to eat them.  The Turtles put up a fight, but the Titan proves too much.  Don then comes rushing in and stabs Cronus in the eye with his staff.  Before Cronus can regain his senses, the Turtles flee the chamber and lock the doors behind themselves.

Don tells his brothers that Locke has been hiding something from them.  They head toward the chamber marked “Ector”, as that’s where Locke was headed when they first bumped into him.  They pass several figures such as Merlin and Paul Bunyan, all frozen stiff, and find Locke at the top of a staircase.  Locke again warns them to leave, but the Turtles are no longer falling for his ruse.  Don then shows Locke his own reflection in the shield, revealing his true identity: Loki. 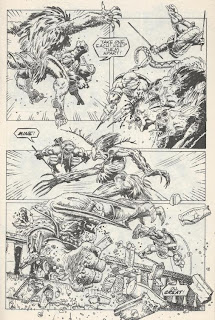 Not wanting the Turtles to ruin his plans for seizing control of All Creation, Loki opens up a portal and summons four of the most ferocious monsters of legend: Fideal, Cerberus, a mantichora and Grendel.  The Turtles each take a monster and with some effort, Raph kills Cerberus, Mike takes down the mantichora and Leo shreds Fideal.  They all then join Don and together they fell Grendel.  Loki prepares to summon Nyarlathotep and Baal next, but Mikey takes him down with a throw of his nunchaku.  Putting his katana to Loki’s throat, Leo forces the trickster to free all the inhabitants of the Halls of Lost Legends from his spell.

Later, once all the figures are freed, Merlin approaches the Turtles and delivers his gratitude.  He explains that Loki had discovered an ancient curse and used it to freeze all the inhabitants of the Halls.  His intent was to fill the Halls with creatures of his own nature, such as Cronus and all the monsters he had summoned.  The frozen figures of myth then used their last ounces of willpower to summon the Turtles to the Halls early in the hopes that they could defeat Loki.  And speaking of Loki, Merlin says that he will be returned to his prison to await Ragnarok.  The Turtles have more questions, but Merlin says that they must leave and teleports them all back to their camp where Master Splinter awaits.

They tell Splinter their story and find that he doesn’t doubt a word of it.  The Turtles ask Splinter what all that stuff about them arriving “early” meant and Splinter says that, one day, they will reside within the Halls of Lost Legends.  Leo is incredulous, as the Turtles keep their existence secret and could never become legends… or could they?

*According to Peter Laird, all issues published between TMNT (Vol. 1) #21 and TMNT (Vol. 1) #45, with the exception of TMNT #27 and TMNT #28, are non-canon.  Despite that, there is nothing in this issue to contradict Mirage continuity.  So decide for yourself whether it “counts” or not.

The guest era of TMNT Vol. 1 is nearly over and Paul Jenkins and A.C. Farley pull out all the stops.  Many people hate the guest era, and I’m not entirely fond of it myself, but stories like “The Halls of Lost Legends” make the whole experiment worthwhile.

The basis of Jenkins’s story is a concept that interests me; the idea that people can bring their beliefs into existence through sheer force of will, thus providing an origin for religious deities and superstitious entities the world over.  One of my all-time favorite Stephen King short stories, “The Boogeyman”, covers the same concept (albeit in an obviously more horror-themed way).  In that story, a grieving father claims that the Boogeyman killed his son.  He rationalizes that children believe that the Boogeyman is real and that their fear is powerful enough to will the creature to life.  An episode of The Real Ghostbusters also dealt with the subject, in “Elementary, My Dear Winston”.  The idea was that so many people the world are under the misconception that Sherlock Holmes was a real historical figure that their combined belief brings his “ghost” into existence (because of course he'd be dead by now).  And for a great, GREAT movie that deals with this subject, you really ought to check out John Carpenter’s “In the Mouth of Madness”.  In that one, an author named Sutter Kane (standing in for H.P. Lovecraft) becomes so popular the world over that more people believe in his books than they do the Bible or the Koran, etc.  As the global majority begins to ascribe to his view of reality, so change the laws of the universe and all sorts of monstrous, impossible things begin to happen.

As you can see, this isn’t exactly an unexplored topic, but it certainly is one with plenty of room to move around.  It also allows for deities and creatures of multiple religions and mythologies to coexist when, if any of them were the “right” religion, such a thing would be impossible.  In the grand scheme of the Mirage TMNT universe, “Halls of Lost Legends” provides a convenient explanation as to how the Turtles can encounter so many creatures of conflicting myths and belief systems across their adventures.

As a Donatello spotlight, “Halls of Lost Legends” challenges his rational, analytical mind and he spends most of the story looking for the man behind the curtain.  The story forces Don to accept that supernatural things may well exist in the world, whether he can explain them away or not, and ties back into his earlier lesson about intuition.  If you’ve been reading the recent TMNT series published by IDW, Don has a similar crisis when coming to grips with “reincarnation” and so forth.  Of course, in terms of the Mirage universe, Don’s sudden incredulity toward all things mythological seems a little odd, considering he’d already encountered mythological deities of American Indianfolklore and even dealt with the idea of soul transference.  One would think he’d be over it by now.  Ah whatever; I'm just picking nits.

A.C. Farley only penciled two complete issues of TMNT Vol. 1, but of them this is his best.  It’s a real beauty in terms of layout and detail and the way he renders all the legendary monsters is just amazing.  The architecture of the Hall is glorious and, ya know, I’d really like to play a video game on this very subject and setting.  I imagine that would be a lot of fun.  Bonus points also go to Mary Kelleher’s lettering, particularly for Cronus’s dialogue, as it boasts a faux-Greek font that helps give it some extra personality.

Farley contributed a lot to the TMNT during his tenure with the brand; particularly in the realm of painted covers, posters and trading cards and even a few really cool statues.  From what I’ve read, his relationship with Mirage ended on a sour note over the mandatory retroactive work-for-hire agreements, which is a shame, as he was one of their finest recurring “guests”.  The real tragedy is that he never penciled more than two issues, as his work is simply stunning.

Grade: A (as in, “And what happened when the spell was lifted on Sleeping Beauty’s chamber?  Did she wake up?”)
Posted by TMNT Entity at 11:41 AM