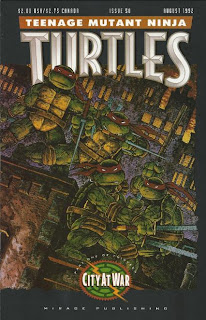 In the woods of Northampton, Splinter meditates silently by a still stream.

In New York City, an old man walks through the adult district carrying his dinner back to his apartment.  As he enters his building, a Foot Soldier quietly places a time bomb in an adult video store on the first floor.

At the farmhouse in Northampton, Casey packs up his belongings.  He chucks his hockey mask in the garbage and hurls a framed picture of himself and April against the wall.  As he walks out the door he stops and removes the photo, putting it in his back pocket.  Casey climbs into his Chevy and hits the road.

The Turtles board up the farmhouse, sullenly and silently.  With their belongings in tow, they hitch a ride on the roof of a train. 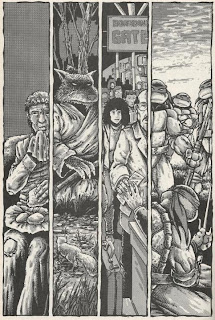 April awakens suddenly from a nap.  She’s resting at her airport gate.  Solemnly, she grabs her bag and boards her plane, taking off for California.

At his apartment, the old man sits and watches a news report covering the current troubles in Moscow which may finally signal the collapse of the Soviet Union.  The old man is moved to tears. 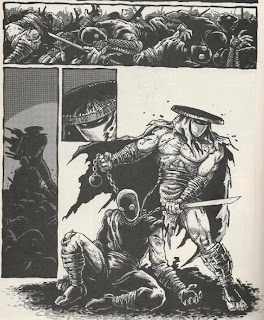 Back at his apartment, the old man continues monitoring the news, weeping.  Suddenly, the time bomb in the adult video store below him goes off, taking out the whole building.  In the shards of the exploding glass, images of Casey, April, the Turtles and Splinter can be seen.  All have gone their separate ways. 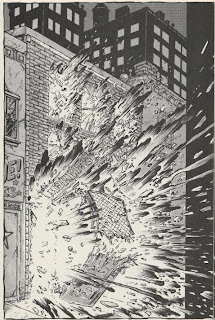 In the woods of Northampton, Splinter continues to meditate by the stream as all the leaves fall from the trees.

*This is the first issue to have art by both Eastman and Laird since TMNT (Vol. 1) #11.

*One of the joints in the adult district is called “Rick’s Dive”.  “Rick’s Dive” was the substitute name given to Munden’s Bar in the second printing of the TMNT short “D’Ants Fever”.

It’s been a long time, but Eastman and Laird reunite for a real throwback to “the good ole days”, even if this opening chapter in “City at War” hardly indicates any “good days” in store for the characters.  39 issues have passed since the pair last collaborated as they had when TMNT began, so at least visually, this issue is a real trip down memory lane.

A silent issue, TMNT #50 basically sets everything into motion for the epic Volume 1 finale.  Eastman and Laird have always had a talent for telling their stories visually and many of their books often feel like they could be read just as well without the dialogue.  Leonardo(microseries) #1 is perhaps the best example of their skill at this approach; their ability to layout a story that tells a narrative through its imagery and not its words is truly impressive.

The seeds for the big break-up were planted in the preceding “Shades of Gray” arc and we finally see the family fall apart.  It’s a bitter situation, but necessary for the growth of each character.  April’s been imprisoned by her responsibility to keep the Turtles a secret and needs to get her life moving forward again.  Casey just needs to grow the hell up and his maturity has been stagnating thanks to playing dress up on the farm for I don’t know how long.  The Turtles need to find their own path away from their sensei and deal with the fallout of their previous actions.  TMNT #50 shatters the comfort and status quo that the volume had been relaxing in for way too long and feels long overdue.  The characters simply weren’t growing or evolving as they were and each had pretty damn good reasons for needing to branch out along their own path.

As a result of all these separate plotlines, “City at War” is a storyline that’s about more than just the Foot Clan civil war that the Turtles are all caught up in.  Over the next dozen issues, we’ll be following April, Casey, Splinter and even that old man as they all go through their own crises and hardships.  If you’re only familiar with the 4Kids TMNT animated series adaptation, you may be in for quite a surprise with these issues.  There’s quite a lot more to “City at War” than what got boiled down for 3 episodes of a Saturday morning cartoon.

Of all of Eastman and Laird’s visuals present in this issue, it’s the big “explosion” that’s the most ambitious.  It practically tells the whole story in and of itself, nearly making the pages that preceded it feel unnecessary.  It’s funny; when I first looked over those pages, I was bewildered by the fact that Splinter’s two-page spread at the end was essentially a reversal, or a “flipping”, of his two-page spread at the beginning (just with the leaves having fallen from the trees).  After looking over it some more, I realized that this was his “reflection” in the shattering glass of the explosion, hence the “mirrored” effect.  A clever little detail and one of my personal favorite bits to the issue.

Of course, this would also be the last full issue drawn by both Eastman and Laird that we’d ever get.  It likely wasn’t meant to be, but things just worked out that way, alas.  In a way, the truth and the fiction collide; as the characters within this story go their own separate ways to grow and change, so too would Eastman and Laird.

The bonus pin-ups in the back are a great tribute and sort of a vision of the future, as they feature guest art from Image founders Larsen and McFarlane… And Image would go on to be the home of the TMNT for several years in the ‘90s.  My favorite pin-up is the Mirage Studios “jam session”; a lovely two-page spread featuring the cast of characters as rendered by all of the staff.  It just makes me smile every time I look at it.

TMNT #50 is not a happy issue in terms of story; in fact, it’s downright depressing.  But there’s something satisfying about seeing Eastman and Laird together again after 5 years and, much to everyone’s satisfaction, they’re still at the top of their game.  It’s been a little over 20 years since this issue was published and we may never see a full-issue team-up by them ever again, but then whose to say?  Anything’s possible.

Grade: A (as in, “And the reason that jam session spread makes me smile?  The Fugitoid giving a Fonzi style double thumbs-up.  Eyyyyyyyyy.”)
Posted by TMNT Entity at 3:30 PM