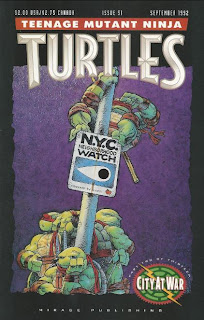 In a dilapidated rooftop water tower, the Turtles have set up shop for their ongoing (and so far, uneventful) attempt to quell the escalating violence among the remnants of the Foot Clan.  Leonardo is having second thoughts about their decision to go “looking for trouble”, but Raphael is insistent that they’re doing the right thing.  It’s their fault that the Foot Clan have become so brazen and violent in the wake of the Shredder’s death and thus it’s their responsibility to finish the job.  They decide to follow some leads found in the latest newspaper stories.

At Northampton, Splinter sits in the wilderness, meditating. 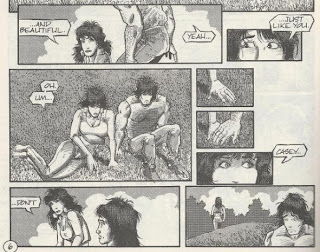 On the road, Casey is nearly falling asleep behind the wheel.  He keeps drifting back to his last moments with April.  He had attempted to express his feelings for her, but she rebuffed him.  The next thing he knew, she’d left for LA without telling him.  Casey, wanting some closure on their relationship, has set off to LA to find her.  Nearly getting into an accident, however, Casey decides to stop at Graham’s Goodtime Grill for some food and coffee.  Inside, he gets to chatting with Gabrielle, the waitress, and she tells him that he’s in Goat Head, Colorado.  They start flirting, though Casey still can’t get April out of his head.

At a club in LA, April’s not having a very good time, much to the disappointment of her sister, Robyn.  Robyn suspects that Casey and “those four Italian guys” April had been living with really messed her up.  April tries to explain that it was nothing like that.  She’s depressed because they all lived together like a family, but now they’ve all broken apart and she feels empty.  Robyn still suspects that April’s hiding something.  Suddenly, “that LeMans woman” enters the club and Robyn suggests they clear out, as trouble always follows her (and don’t forget to read the further adventures of Guzzi LeMans in the pages of Plastron Café!  Just $2.00 an issue; on stands NOW!)

Back in New York, the Turtles comb the remains of Morph’s Adult Novelties, looking for clues.  Though Don suspects it was the Foot who destroyed the shop, he cannot discern a motive (meanwhile, the old man who lived above the store is in the hospital, wrapped in a body cast).  Leo suggests they head to the location of the “bridge massacre” and see if they can’t get a lead there. 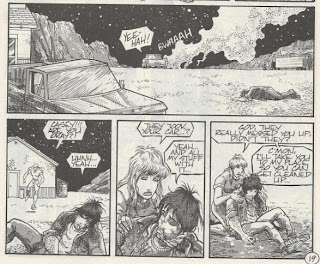 At Graham’s, Casey bids farewell to Gabrielle and decides to get back on the road toward LA.  In the parking lot, though, he’s approached by two thugs who want to steal his Chevy.  Casey puts up a fight, but gets brained over the head with a gas can.  The punks steal his car and all his belongings.  Gabrielle comes running outside and helps Casey back into the restaurant to get cleaned up.

At the junkyard beneath the bridge, the Turtles come up with nothing.  Don is curious as to what twenty-seven Foot Soldiers would be doing at a junkyard and who or what could have slaughtered them all.  Leo has formulated a theory, but he’s not ready to share it, yet.

In LA, April and Robyn return to Robyn’s house.  April is still down in the dumps, but she seems to be pepping up.  Robyn, meanwhile, is just happy to have her sister back in her life.  April returns the sentiment. 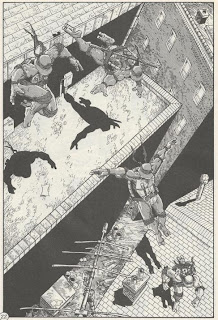 And in New York, the Turtles prowl the rooftops, finding nothing but a gang of kids knocking over trashcans.  Raph suggests they “rough them up” and the Turtles suddenly have the epiphany that not only are they clueless as to what to do, but they’re all dangerously wound-up.  Raph laments that they’ve been reduced to nothing more effective than the neighborhood watch.

*“That LeMans woman” Robyn identifies on Page 13 is Guzzi Lemans, a character created and owned by Jim Lawson.  Her deal can be read in Plastron Café #1, in the story “The Origin of Guzzi LeMans”.

*According to Jim Lawson, The punks that steal Casey’s car are modeled after Eric Talbot and Steve Lavigne. If you look closely on Page 13, you'll see those same characters in the LA club that April and Robyn are drinking at. This indicates that the various arcs running through "City at War" do not happen concurrently.

I’m kind of working backward chronologically here, but rereading “City at War”, I was reminded greatly of the plotting and the pacing of Laird’s TMNT (Vol. 4).  In both instances, the characters become split up and follow their own story arcs, with the narrative cutting in and out of each plot.  Covering so many different threads per issue naturally means that each story can only progress so much.  Volume 4 tended to get quite a bit of complaints in that regard, and indeed, it does move much more slowly than “City at War”, but the two really do keep to the same approach.  While I think “City at War” handled the splitting up of the character arcs much better, I think Volume 4 is a lot easier to digest if you’ve read “City at War” and acclimated yourself to the storytelling style.

That tangent out of the way, everybody’s got a little something going on, here.  Casey’s story arc with Gabrielle is one of my favorite plot threads from “City at War”, mostly because I’m a Casey fan and I enjoy the direction these issues take him.  Best of all, though, is the fact that Casey’s vigilante career essentially ends the same way it began; butting heads with caricatures of Mirage staffers.  Except whereas before, Casey wiped the floor with them, here they bust his chops and swipe his beloved Chevy.  Its great symbolism, as it shows that Casey’s creators are really putting him through the works.  In regards to the Chevy, in previous issues Casey regarded it as his pride and joy and worshipped the damn thing.  Casey’s arc in “City at War” is all about growing up and finding out what “really matters”.  Yeah, Casey’s lost his cherished vehicle, but in time he’s going to gain something far more precious.

April’s arc is just a lot of “meh”, as suits Mirage’s version of April.  While I support and understand her need to get away and think it was a fascinating decision on her end… Her arc is just boring.  She goes to LA to live a normal life and proceeds to live a normal life.  That’s about it.  Lawson shoehorning in a promo for his Guzzi LeMans serial in the then-upcoming Plastron Café anthology was all sorts of awkward.  If you aren’t familiar with the fact that LeMans shows up in her own separate stories, you might end up wondering what the whole point of that bit was.

Then there are the Turtles.  I love how Raph is the one to insist that they find the Foot and end them once and for all, as it echoes his attitude in “Return to New York”.  Leo’s grown, too, as he’s no longer dismissive of the idea but still feels a sense of reluctance in regards to “looking for trouble”.  Of course, the Turtles also realize that they’re getting nowhere fast and need to find a better way to encounter the Foot than running around aimlessly.  It’s a great example of just how out of touch they’ve become with the situation in New York.  They’d spent a long time lounging around Northampton while New York descended into chaos; cleaning things up this time won’t be nearly as simple as it was during “Return to New York”.  As Raph points out, you can chop off the head, but the body will keep twitching.

We’re still in the introductory phases, but “City at War” is going to get much more complicated, very soon.  As this issue stands, though, we’re off to a great start.

Grade: B+ (as in, “But do yourself a favor and don’t bother with those Guzzi LeMans strips.  Trust me”.)
Posted by TMNT Entity at 12:25 PM