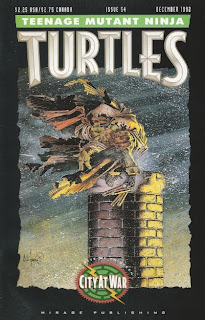 At a grocery store in Colorado, Casey’s working as a bagboy.  Screwing up the order of groceries, he’s assaulted by his manager who threatens to fire him.  Casey belts the loudmouth in the jaw and starts to walk out when he realizes he really needs the job.  Turning back, he apologizes and helps his manager up.  The manager continues being irate, so Casey finally belts him again and storms out for good.

In Northampton, Splinter continues to explore the abandoned industrial complex.  He feels emotional residue of pain and loneliness, though he sees only rats now occupy the place.  Walking the edge of a large smokestack, the ledge crumbles and Splinter goes tumbling into the dark pit.

In California, April is settling into her new job as a computer programmer.  Her employer, Colin, hits on her, but April politely declines the invitation to dinner.  She’s distressed, though, that he’d even ask. 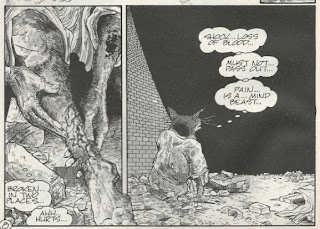 Back in the bottom of the smokestack, Splinter comes to and finds his right leg broken in two places.  The pain is unbearable, but Splinter uses what’s left of his energy to form a splint and set the bone for mending.  The pain is so great it knocks him unconscious.

As her shift ends, April gets a ride home from Robyn.  Robyn’s watching her infant son Trevor for Christmas… a son whom she had with Colin (hence April’s distress when he hit on her).  With Christmas coming up, April and Robyn decide to try and find a nice tree to decorate.

In New York City, Mikey enters the water tower now that his guard shift is up.  A month has passed since the street massacre and gang violence has only been increasing.  Leo finally lays out his feelings to his brothers; he doesn’t believe there is anything they can do to make a difference or end the violence.  He believes the world has become a more violent place, with people motivated strictly by greed and hatred, making their cause hopeless.  Raph asks Leo what motivates him and he answers that he hasn’t a clue. 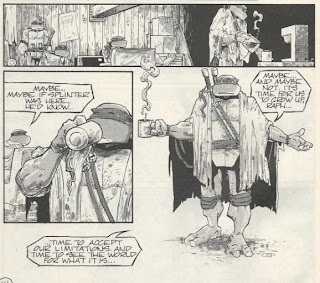 On a private jet crossing the Pacific, the Foot advisor, Yanura, brings a video tape of the street massacre to his superior, Karai.  Karai inspects the footage and, after some video enhancing, catches a glimpse of Donatello among the crowd of Foot Soldiers.

Back in the smokestack, Splinter regains consciousness.  He attempts to walk, but even with the splint he is unable to stand or limp.  Splinter realizes that his ankle will need time to heal, but winter is approaching and with no food or shelter, he may not have much time left.

In Colorado, Casey and Gabe are busy decorating their tree.  Gabe is starting to get her “baby bump”.  Casey asks her to open his gift early; a gift which turns out to be lingerie.  Gabe begins to cry, but Casey soothes her, telling her that she can wait until after the baby’s born to wear it.

In a hospital, a nurse helps the old man out of the radiology ward. 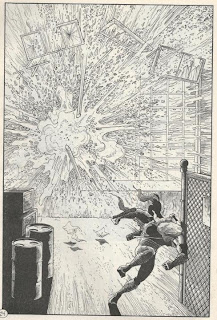 At a warehouse in New York, Foot Soldiers are busy working on something in a chemistry lab.  Suddenly, a Foot Elite Guard storms the building, slaughters everyone inside and then blows the place up by igniting a gas line.

At the water tower, the Turtles hear the report about the attack on TV and ponder the anchorman’s question: “When will the violence stop?”

*April’s history as a computer programmer goes back all the way to TMNT (Vol. 1) #2.

This one’s definitely a breather issue, as we take a break from the heavy action (which dominated the last issue) and let the characters stew for a bit.  Casey’s segment was great, as it shows how much he’s struggling with this whole “grown up” thing.  He has to learn to suck up his pride and do menial tasks, but that’s a tall order for someone so used to punching out anybody that ticks him off.  Moments like this are great because they show that he didn’t just decide, “I’ll be responsible, now” and suddenly transform into a responsible adult overnight.  He’s got to work hard at it and he’s only got a few months to figure it out before Gabe’s kid is born.

The other big moment in this issue is Splinter’s dilemma finally getting under way.  He’s been shown to have lost his focus and zen-like perspicacity over the past few issues and now that inability to concentrate is really starting to bite him in the ass.  I always like stories that show Splinter struggling, as he’s far too often depicted as an infallible and untouchable master of whatever physical or metaphysical art the plot calls for.  I hate “perfect” characters, so it’s been really satisfying to see Splinter labor and lose himself.

Then there’s April, being hit on by her sister’s ex-husband who also happens to be her new employer.  That’s some soap opera-quality melodrama if I ever read any.  Still, it’s nice to see April’s history as a computer programmer brought up again.  It’s an ability of hers that basically went forgotten by Mirage since her introduction in favor of relegating her to a shrewish den mother at best and a whimpering crybaby at worst.  I’d almost forgotten that she could do something other than nag and sob.

Meanwhile, the Turtles are left to come to terms with how ineffectual and outmatched they are in this situation.  They’ve been stewing in that water tower for a whole month since the street massacre, getting absolutely nowhere.  As with Splinter, it’s great to see the Turtles undergo this ego-blow, as it really helps mold them as characters.  Leo puts the whole “growing up” theme that’s been permeating “City at War” into words in this issue, helping to illustrate how juvenile and simple their original solution was.  Storm the bad guy’s headquarters, kill the leader and blow the place up?  That may have worked in the old days, but the world is growing and evolving beyond such childish schemes and if they don’t grow and change with it, well… They might as well just sit on the sidelines like a bunch of dopes.  And that’s exactly what they’re doing.

Grade: B (as in, “But I see the Foot have CSI Miami levels of magical video resolution enhancing  technology”.)
Posted by TMNT Entity at 4:20 PM